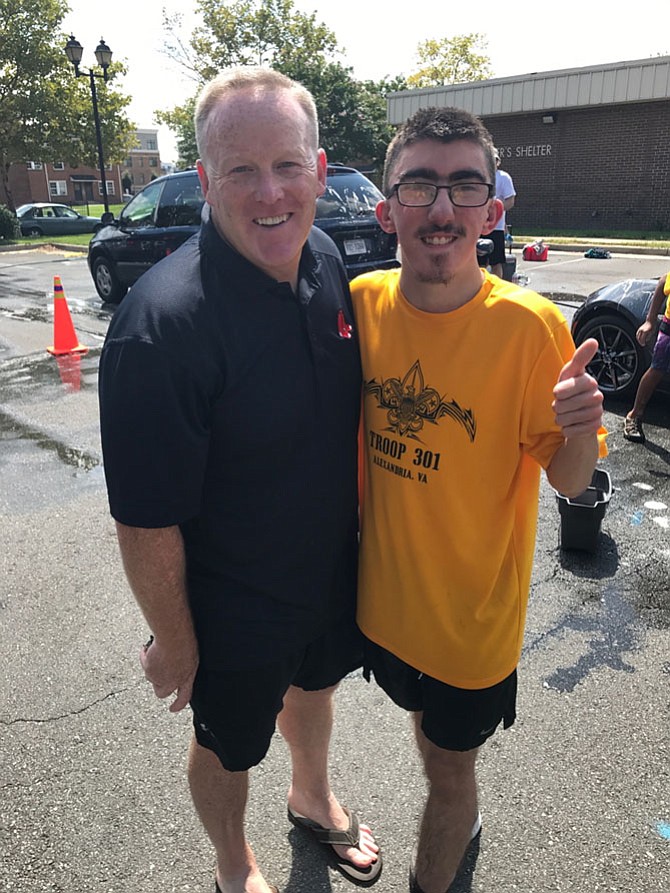 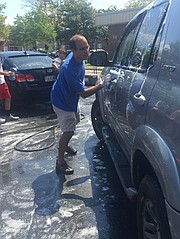 Boy Scout Jonathan Nearman was part of many car wash fundraisers while on his high school track team. But earlier this month, he planned and managed his own car wash as his Eagle Scout project.

His goal was to make sure every child at the Carpenter’s Shelter had needed supplies for school.

He succeeded in his Back-to-School Car Wash – with help from his Alexandria Troop 301 members, his Scout cousin from Northeast Maryland and many other volunteers – by raising hundreds of dollars worth of new school supplies while the shelter received more than $800 in cash to buy additional school supplies for their families.

It was a busy day at the North Old Town shelter as former White House Press Secretary Sean Spicer answered Nearman’s invitation and brought his car in for a wash. Spicer posed with the volunteers for selfies and group pictures as his car was being washed. Spicer presented Nearman with a special “White House Press Secretary Sean Spicer” medallion driving away in his clean car.

Mayor Allison Silberberg also paid a visit and posed for pictures and chatted with the crowd as well. Vice Mayor Justin Wilson took it one step further, getting deep into the suds washing cars alongside the Scouts and friends.

Father Andrew from St. Mary’s Church – which charters Troop 301 – and Todd Bolick, District Executive from the Boy Scouts of America National Capital Area Council, also had their vehicles washed as a show of support for the Eagle project and Carpenter’s Shelter.

The project received support from Sugar Shack for breakfast, Monterey Pizza for lunch, Nova Retail for signs and Carpenter’s Shelter Executive Director Shannon Steene and his staff for logistical assistance.