The Few. The Proud.
Votes 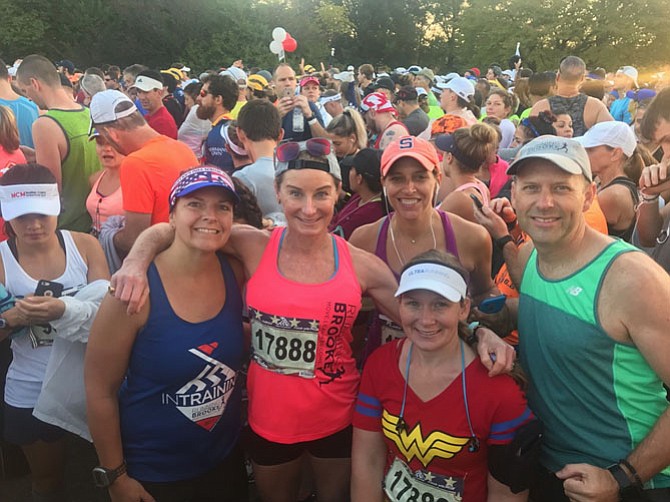 “It wasn’t my best time but given my training this year, along with the heat, I’m very happy with it.” — Alexandria Vice Mayor Justin Wilson after completing the Marine Corps Marathon 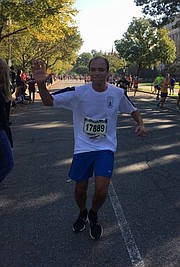 Alexandria Vice Mayor Justin Wilson, shown at mile 19 of the Marine Corps Marathon, finished the Oct. 22 race in 3 hours, 33 minutes and 31 seconds. He was part of the RunningBrooke team supporting Alexandria children’s services. 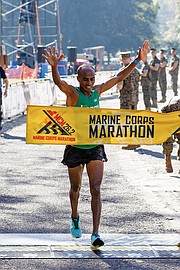 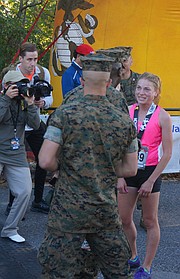 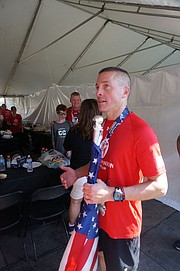 Running for Team Manion, Army veteran Jacob Marquis of Bangor, Me., completed his mission to run one step for every combat death since the Revolutionary War while carrying the U.S. flag – a total of 1,012,000 steps. Marquis, 44, began his quest in 2013 and completed the final 39,000 steps Oct. 22 in Arlington. He finished with a time of 4:26:00. 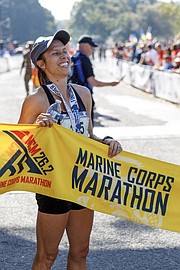 Sarah Bishop, 35, of Fairfax, celebrates holding the finish line tape after winning the women’s division of the Marine Corps Marathon with a time of 2:45:06. 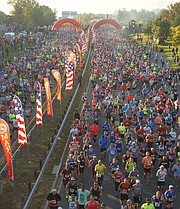 More than 30,000 runners crowd the streets of Arlington at the start of the 42nd annual Marine Corps Marathon Oct. 22.

In the pre-dawn hours of Oct. 22, Alexandria Vice Mayor Justin Wilson lined up with 30,000 other runners for the 42nd annual Marine Corps Marathon, crossing the finish line 3 hours, 33 minutes and 31 seconds later as part of the RunningBrooke team raising money for local children’s services.

“This was my eighth marathon and fourth time running Marine Corps,” said Wilson. “It wasn’t my best time but given my training this year, along with the heat, I’m very happy with it.”

Wilson, whose best time is 3:19, ran his first marathon in 2008 and has run one every year with the exception of election years.

“My wife only lets me ‘run’ for one thing at a time,” Wilson joked. “I’ll probably take next year off given it’s an election year, but I’d still like to qualify for Boston one day. I probably need to get a bit older to make that happen.”

Wilson was part of the 15-member RunningBrook team, founded by Brooke Curran to raise money for children’s services.

“This was marathon number 111 for me,” said Curran, who has run a marathon in every state and on every continent since founding the nonprofit. “We had several first time marathoners on the team this year and everyone finished so I am super excited.”

Sarah Bishop, a 35-year-old mother of four from Fairfax, was a last minute entrant into the women’s division of the marathon. With just three days to go before the race, she had yet to find a babysitter.

“I had been training and knew I was in shape to do well,” said Bishop, who finished fourth in last year’s race through the streets of Northern Virginia and Washington, DC. “This race is my home turf and I really wanted to run.”

Bishop did find a babysitter for her 7-, 5-, and twin 4-year-olds. She crossed the finish line in 2 hours, 45 minutes and 6 seconds to claim the women’s championship trophy.

“By mile 13, I felt strong and knew I could do well at the finish,” said Bishop, who missed qualifying for the Olympic trials by 6 seconds. “Sometimes you have the opportunity to do something and you just need to seize the day so that’s what I did.”

Bishop was followed by Meghan Curran of Fort Carson, Colorado (2:50:23) and Suzanne Hutchins of Gastonia, N.C., who finished third with a time of 2:53:35.

“Groundpounder” Al Richmond, 79, of Arlington, completed the marathon in 6:48:35. Richmond is the last remaining runner to have completed every Marine Corps Marathon since its inception in 1976.

Wilson, who typically trains in the early morning, is slowly recovering from Sunday’s race.

“I’m almost back to walking normally,” he joked. “It was certainly warm this year but I was glad to run as part of Brooke Curran’s RunningBrooke team. She does great work for the kids in our city and I’m always happy to help her out.”

Complete race results can be found at www.marinemarathon.com.