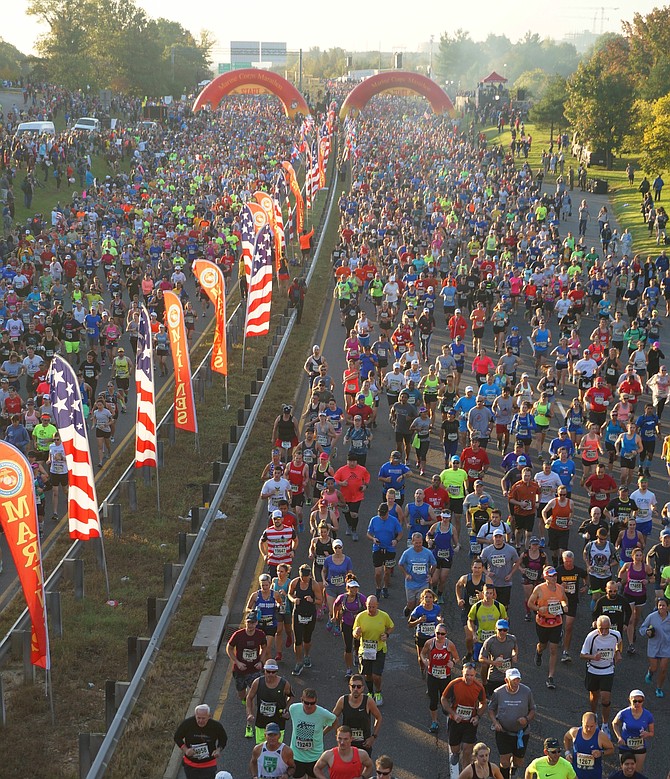 More than 30,000 runners crowd the streets of Arlington at the start of the 42nd annual Marine Corps Marathon Oct. 22. Photo by John Bordner/The Connection

“I did my best and Morkoma ran a great race.” — Arlington’s Kieran O’Connor, who led for 24 miles of the 26.2-mile Marine Corps Marathon. 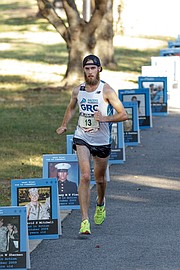 Arlington’s Kieran O’Connor, 30, runs The Marine Corps Marathon’s Blue Mile, where more than 275 fallen service members are remembered in photos along the Potomac River. O’Connor, who led the Oct. 22 race for more than 24 miles, took third place after finishing in 2 hours, 28 minutes and 6 seconds. 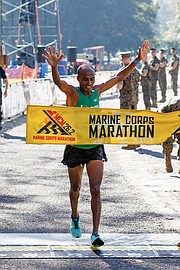 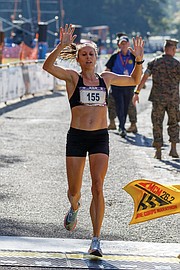 Sarah Bishop of Fairfax crosses the finish line in 2:45:06 to win the women’s division of the 42nd Marine Corps Marathon Oct. 22 in Arlington. The 35-year-old mother of four missed qualifying for the Olympics by 6 seconds. 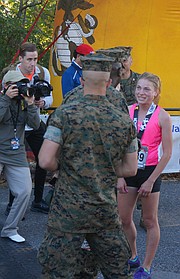 For 24 miles, Kieran O’Connor looked over his shoulder and saw no one. The Arlington resident took an early lead, running alone through miles of empty streets. But in Crystal City, he saw something he didn’t expect — Desta Beriso Morkoma was quickly closing the gap.

“I was dehydrated more than I expected to be in the second half of the race,” said O’Connor. “But I did my best and Morkoma ran a great race.”

In the end, it was the 32-year-old Morkoma, also from Arlington, who became the champion of the 42nd Marine Corps Marathon, finishing with a time of 2 hours, 25 minutes and 13 seconds.

“I ran alone for most of the race,” said Turner. “But you just try to run your own race and I feel good about how I did today.”

Sarah Bishop, a mother of four from Fairfax, took first place in the women’s division after pleading her case nine days ago asking organizers to allow her to run.

“I came in fourth last year and really felt good and wanted to run,” said Bishop, who completed the course in 2:45:06, just 6 seconds shy of qualifying for the Olympic trials. “This is my home turf so the win is very special to me.”

“I felt strong today,” said Richmond, who has completed every Marine Corps Marathon since its inception.

Full results can be found at www.marinemarathon.com.