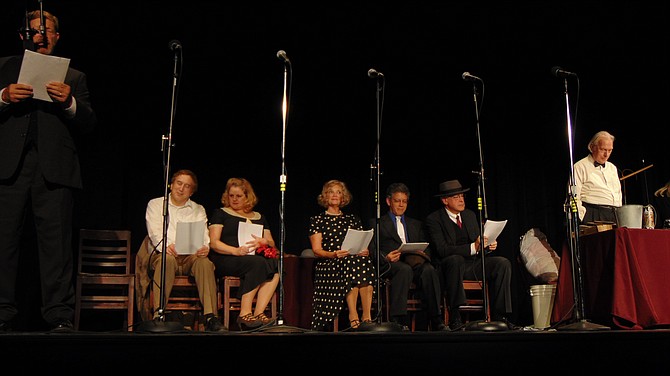 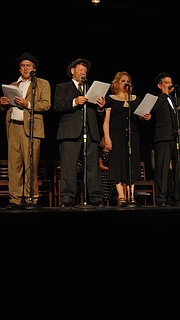 The ensemble from "In Living Sound – Back Home" performs at the Vienna Community Center. 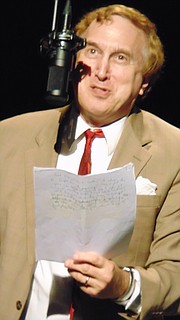 Stuart Fischer stars in "In Living Sound – Back Home" at the Vienna Community Center.

In its first show of the 2017-2018 season in the newly renovated Vienna Community Center, the Vienna Theatre Company is presenting the live radio drama, "In Living Sound – Back Home," this coming weekend, Oct. 27-28, at 8 p.m.

Directed by Patricia Kallman, the ensemble of six actors is performing four scripts from the Golden Age of Radio during the 1930s and 1940s – one humor, one crime, one sweet tale from the Depression and one horror. The ensemble cast includes: Stuart Fischer, Terry Mason, Jay T. Stein, Jocelyn Steiner, John Totten and Kathy Young.

The first show, "Popeye – Visiting the Zoo," which is replete with live sound effects by Sherry Kaiser and Roy Kallman, was an episode that aired in the 1930s. In this play, Popeye, Olive Oyl, Wimpy and Matey, the newsboy, visit the zoo in search of adventure.

Kallman said she paid particular attention to the voices to get them down just right. "They are so distinctive for Popeye and they were so popular. So I thought that would be the interesting vocal part for this," said Kallman, 70, of the Greenbriar community who co-founded the Alliance Theater in Centreville with Elaine Wilson in 2000.

HER CHALLENGE was to make the sound effects interesting, she said. "We debated animal sounds. We tried a lot of different things. We tried all kinds of things for the hyena. It would be fun if there were actual animal noises but we did the best we could with them. There weren't any in the original radio play; we thought we would add something to it."

The second play, "Boston Blackie – Blackie and the Fur Trade," which aired in 1945, was created by Jack Boyle, a newspaper reporter and reformed opium addict while serving a term in San Quentin for robbery. Blackie started out as a jewel thief and safecracker, but then became a detective. The radio series spawned 14 films for Columbia Pictures. In this play, Janet and Harry are fur thieves, and are apparently getting assistance from Boston Blackie. But the hare-brained Inspector Faraday is in hot pursuit and we learn that crime doesn’t pay.

Kallman said she was trying to recreate a film noir kind of feel to it – "the mystery and the grit," she said. "I was really amazed when I started researching it; I didn't know there were 14 Boston Blackie movies," she said.

The third play, "The Fleischmann's Yeast Hour – The Church Mouse" first aired on Dec. 19, 1935. Also known as the Rudy Vallee Show, it was a musical variety show on NBC from 1929 through 1936, and into 1939 when it was renamed The Royal Gelatin Hour. In its prime, it was second only to "Amos 'n Andy" for popularity and showcased many stars of the future. In this play, a meek but scrappy unemployed secretary lobbies for a job in a bank in a creative and unconventional way.

Kallman said she was trying for something a bit lighter. "It was three times made into a movie and it was on Broadway as a play first," she said. "I guess it ends up being a love story. I forgot that people were desperately hungry in the middle of the depression. People were trying to get by, so it's amusing to hear her talk about dividing up a sardine."

The final play, "Lights Out – Knock at the Door," first aired on CBS in 1942. This tale begets the supernatural, when an overly protective mother is done away with by her new daughter-in-law. Arch Oboler took over Wyllis Cooper's series in 1936 when it had 600 fan clubs. Rod Serling counted the duo as his inspiration for "Twilight Zone," which was to TV what "Lights Out" was to radio.

"We all said Halloween is coming and we ought to end up with something scary," said Kallman. "We read a number of scripts and thought somebody coming back from the dead was interesting."

The Vienna Theater Company is presenting the live radio drama, "In Living Sound – Back Home," Oct. 27-28 at 8 p.m. Tickets are $14. The venue is located at The Vienna Community Center, 120 Cherry St., SE, Vienna, VA. Visit the website at http://www.viennatheatrecompany.org.