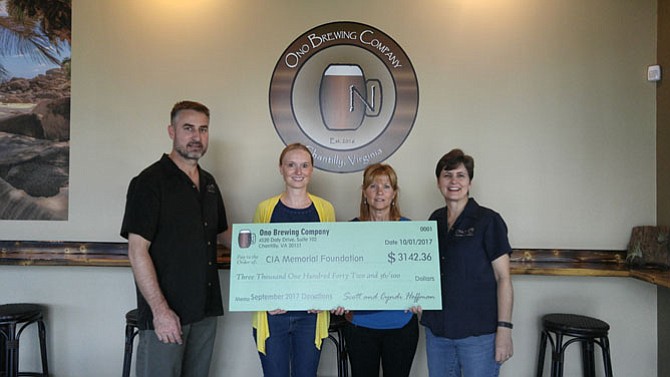 The Chantilly brewery is completely self-serve, with a self-serve beer wall with eight beers on tap, all brewed on the premises. Since customers are serving themselves, tipping is optional at Ono and not expected. Scott and Cyndi Hoffman have chosen to pay their employees a competitive wage so they don’t need to rely on tips. If customers are compelled to tip for excellent service, tips are donated each month to a different local charity.

For its first month of business, September 2017, gratuities were donated to the CIA Memorial Foundation, which supports the families of CIA officers who have died in active service of our nation. For the academic year 2016-2017, the Foundation awarded scholarships and other educational support for 48 family members of deceased CIA officers to colleges and universities around the country.

For October, Ono Brewing Company has chosen to support the Step Sisters, a non-profit organization whose mission is “Improving the quality of life for those impacted by breast cancer by funding needed support services in Northern Virginia.” Donations to The Step Sisters go towards funding quality of life services, such as food delivery, transportation costs to and from treatment, childcare and house cleaning, for local breast cancer patients in Northern Virginia.

To learn more about Ono Brewing Company, check out at www.onobrewco.com or find them at www.facebook.com/onobrewco , and @onobrewco on Twitter and Instagram.