‘It Never Goes Away’
Votes

‘It Never Goes Away’

Survivors of domestic violence share stories of those lost. 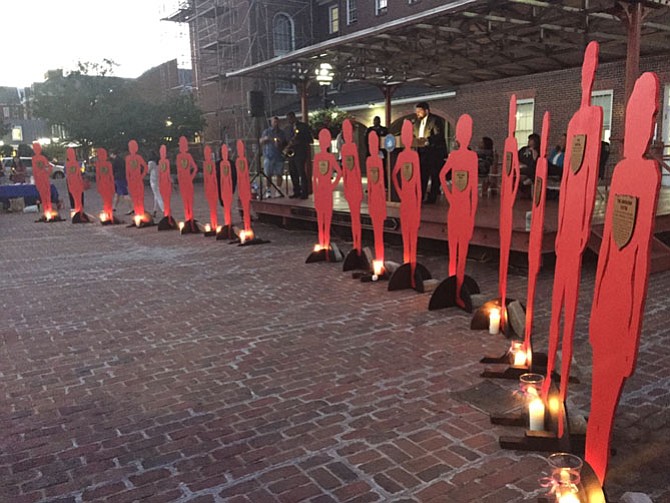 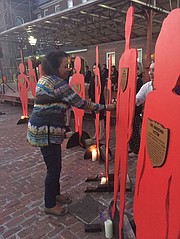 Rhonda Griffin lights a candle at the memorial for Seble Girma Tessema and her daughter Eden.

Karen Mitsoff had kind eyes. That’s how Bryan Porter remembers her. It was his first day of kindergarten and he’d been terrified, but when he got to school, she greeted him outside the school and helped calm him down. Years later, he can still see her large, calm, caring eyes. It’s something that comforts and haunts the Commonwealth Attorney 21 years after her murder at the hands of her ex-boyfriend Fasseha Senbet. He had been stalking her and had even broken into her house and held her at gunpoint. He was arrested, but when he was released on a $2,500 bond, he returned to her house, shot her, and then himself.

“To those here who lost a loved one or a friend: you are a survivor, not a victim,” said Porter.

The latest figure to the display was added this year. Rolf Marshall, a navy veteran living in Old Town, was shot and killed by his wife Paula Thompson Marshall after Rolf Marshall refused to have their aging dog put down.

“I never get to meet the victims in these cases,” said Porter. “I never got to meet Rolf Marshall, but I did meet his two sons, who taught me about his humor and his love of travel.”

For Rhonda Griffin, every day gets a little bit easier, but the pain never fully goes away. She was the foster mom to Eden, a 3-year-old girl being taken care of by her mother, Seble Girma Tessema. Tessema was a 27-year-old immigrant from Ethiopia who was separated from the father, Simon Bhata, after he’d become violent in previous arguments. After finding out that she had made a phone call to a man, Bhata became jealous, and during a planned visit to pick up his child he barged into Tessema’s apartment and murdered both her and Eden.

“It never fails, every year,” said Griffin. “It never goes away. You just have to fight through it.”

These stories aren’t isolated. In fiscal year 2017, 2,000 women in Alexandria came forward looking for help from domestic violence situations. Kate Garvey, director of the Department of Community and Human Services, said there are plenty more in the city who are unable to come forward and get help. An 18th figure stands at the end of the display and represents all those victims of domestic violence whose names are unknown.