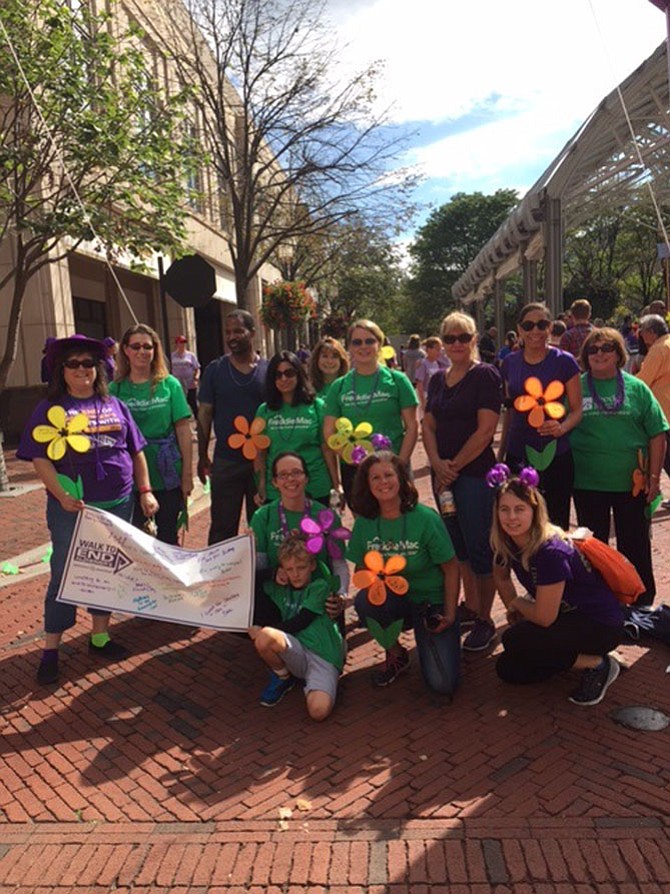 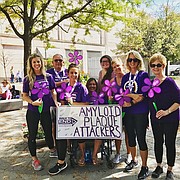 Elizabeth Klemens of Arlington joined the 2017 Northern Virginia Walk to End Alzheimer’s. Her team was called the Amyloid Plaque Attackers, named after the plaques that form on the brain when Alzheimer’s is present. 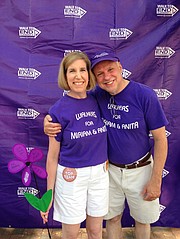 Ilissa Belanger of Fairfax joined the 2017 Northern Virginia Walk to End Alzheimer’s along with her husband Tim Belanger. Her team, Walkers for Miriam and Anita, was named in memory of her mother and mother-in-law respectively.

“I hope to raise money for treatment to slow it down or find a cure so that no one has to go through it.” — Ilissa Belanger

More than 1,000 people pounded the pavement in Reston last month and raised more than $267,000. The 2017 Northern Virginia Walk to End Alzheimer’s, held at the Reston Town Center, exceeded its fundraising goal of $250,000.

Held each year in more than 500 communities around the country, The Alzheimer's Association's Walk to End Alzheimer’s seeks to raise awareness and funds for Alzheimer’s care, support and research.

Ilissa Belanger of Fairfax walked to raise money and awareness of the disease.

“Both my mother and mother-in-law had Alzheimer’s and it’s a difficult thing to go through,” Belanger said. “I want to help other families who have to go through it. I hope to raise money for treatment to slow it down or find a cure so that no one has to go through it.”

This was Belanger’s 10th year participating in the walk. This year she was part of a 15-member team, Walkers for Miriam and Anita, named in memory of her mother and mother-in-law respectively.

“We do walk in honor or memory of our loved ones, but also their caregivers,” she said. “It’s important to support the caregivers as well. In my case, it was my father and father-in-law who were wonderful as their wives were going through it.”

Debbi Johnson of Centreville joined the walk for a second year in honor of her former mother-in-law. Her team consisted of members of her church, New Life Christian Church in Chantilly and her employer, Freddie Mac (Federal Home Loan Mortgage Corporation).

“I do charity walks because I feel that it’s important to serve,” said Johnson. “I felt that I should do something for Alzheimer’s because there are many people I know who have been affected.”

Janet Davis of Burke walked in honor of her 83-year-old father who has been living with Alzheimer’s for 10 years. Both her mother and her father joined the walk this year.

“The disease has happened gradually and it’s very sad to watch,” she said. “My dad still has function and can dress and feed himself, but sometimes he can’t remember my mom’s name or my name. We’re very vocal about our support of Alzheimer’s.”

Elizabeth Klemens, a 27-year-old nurse who lives in Arlington, participated in the walk for the first time this year. “My personal experience is that my grandfather had Alzheimer’s and he died five years ago at 78, but he suffered for about 10 years,” she said. “I’m a nurse at Reston hospital and I volunteer at the Walter Reed Adult Day Health Center, and I see the effect of Alzheimer’s or dementia on almost a daily basis, so I’m very familiar with the disease.”

Caryl Grant of Alexandria walked in memory of her mother who died in 2009. Her team also consisted of her husband, daughter and son-in-law. “My mother had Alzheimer’s and I watched her deteriorate and it was heartbreaking,” she said. “The hardest thing about it for us and other people is watching them disappear and trying to figure out the best thing to do.”

The Promise Garden ceremony is a walk day event that helps illustrate the diverse reasons for participation. Participants received a Promise Garden flower in a color that represents their connection to the disease. Blue represents someone with Alzheimer's or dementia. Purple is for someone who has lost a loved one to the disease. Yellow represents someone who is currently supporting or caring for someone with Alzheimer’s. Orange is for everyone who supports the cause and vision of a world without Alzheimer’s.