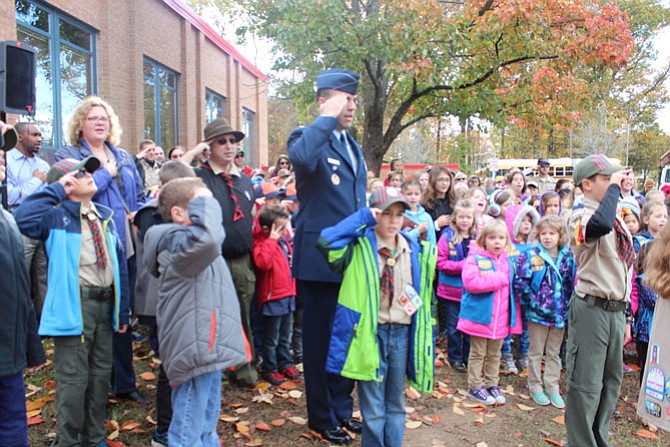 Teachers, parents, and students salute the flag as the "Star-Spangled Banner" played.

The band concluded the ceremony by playing "America the Beautiful"

brat,” knows how children need to celebrate Veterans Day: “In the past, veterans would come and we would just honor veterans. Now, we have this piece with the kids reading letters they write to their parents, aunts, uncles, and grandparents. It means so much to the families, to the kids and to me. My dad was in the Air Force. I never knew what it was like to talk about my dad. I feel that this is another reason why we wanted to do this; I never had a chance to speak in front of anyone about my own dad. So this is the third year we have done this with the kids reading. We add more kids to it each year and we love it,” said the principal to reporters.

Fairfax County Public Schools celebrated Veterans Day on Nov.10. Students, Girl Scouts, and Boy Scouts were rolling out of Hunt Valley as the song “The

Students listen as their friends read their letters out loud.

It was a cold, windy day. “The wind always seems to pick up when we do our Veterans Day ceremony, so we can see the flags better,” said the principal just before the children started the flag-raising ceremony.

More than 20 students read their letters to the crowd. “We forget that freedom is not free and that members of the military have to give up time with their families,” said one student whose father has been in Afghanistan since February.

Just as the ceremony started with music, it concluded with the band playing “America the Beautiful.”

Diana, a sixth grader and band member, fought back her tears when she was asked about what Veterans Day means to her: “I really wish my grandfather was here, because he passed away two years ago and I really just want to recognize how great he was when he fought in the Korean War.”