Cappies Review: Suspenseful Spectacle of Humor and Drama in Herndon 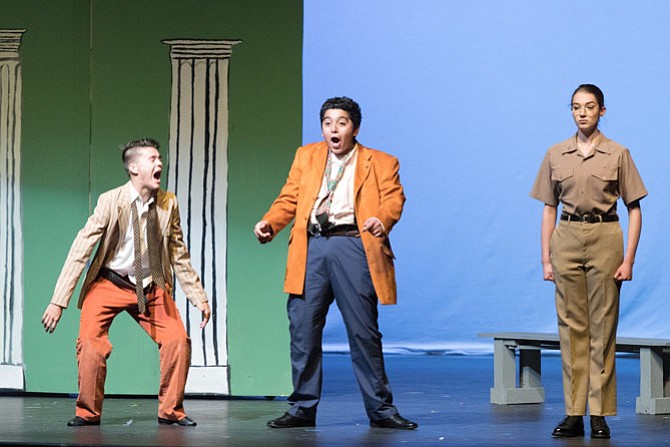 Men and women gather around two flapper girls dancing to Charleston-like music in a local speakeasy while the Duke of Illyria looks on, marking the beginning of the latest production of “Twelfth Night” at Herndon High School, set in the Roaring ’20s.

Written by William Shakespeare around the early 1600s, “Twelfth Night” follows Viola, who poses as a man named Cesario after separated from her brother, Sebastian, during a shipwreck. Tension ensues in this popular comedy when the female protagonist encounters a love triangle between Orsino and Olivia. The play also includes a comic subplot, with two drunkards, a steward, and a gentlewoman, further creating a suspenseful spectacle of humor combined with drama.

Herndon High School put on an unforgettable production of a Shakespeare comedy with the cast's limitless abilities to perform as 17th-century characters in the 1920s. Amazing chemistry was seen throughout the show among the characters to convey an accurate and smooth flow of the comedic plot. All of the characters had perfect comedic timing, even during the most serious moments of the show, keeping the audience chuckling whilst on the edge of their seats. A sprinkle of drama, a pinch of comedy, and a lot of character chemistry makes this production of "Twelfth Night" a memorable one.

Erin Maxwell, who played the female protagonist, Viola, brought life to the character in more ways than one. While playing the role of Cesario, she portrayed the physicality of a male while maintaining a feminine identity. Although she kept the audience laughing with her brilliant comedic timing as Cesario, she stayed strong throughout the show while captivating the essence of sorrow and melancholy as Viola, especially when she mourns her brother's loss and her conflict with the Viola-Orsino-Olivia love triangle. Maxwell's male counterpart, Sean Sullivan (Orsino) maintained an enticing yet likable persona when interacting with other characters. Sullivan's role of Orsino became a more dynamic and sincere character over the course of the show, further demonstrating a charming and heartwarming character towards all.

Although both Maxwell and Sullivan captured the hearts of many during the performance, the supporting characters of the production also provided wit to the comedic plot. Kate Grover, Cristian Bonilla Lainez, Shivam Shrivastava, and Trace Hollenbeck (who played Maria, Sir Toby Belch, Malvolio, and Sir Andrew Aguecheek, respectfully) kept the audience howling with laughter with comedic banter and hilarious one-liners. Intelligent comedic timing is also seen within the jester, portrayed by Rose Bailey, who brought the show with her musical approach to embracing the warmness of her character. All in all, the supporting characters of the Herndon High School production of "Twelfth Night" contributed to making the show unforgettable.

The crew of “Twelfth Night” did an exceptional job of maintaining the roaring ’20s time period while keeping the Shakespearean vernacular. Details such as the "Duke's Speakeasy" and the choice of Charleston-style music sparked the atmosphere in bringing a twist to the 17th-century comedy.

The production also captured accurate makeup and fashion of the 1920s time period with flapper dresses and bold red lips, further displaying the possibility of a Shakespearean play being revamped to a more modern era.

Overall, Herndon High School's production of “Twelfth Night” was a memorable one for a person to watch, conveying that "if music be the food of love, play on."