‘On the Town’ at Walt Whitman High School
Votes

‘On the Town’ at Walt Whitman High School 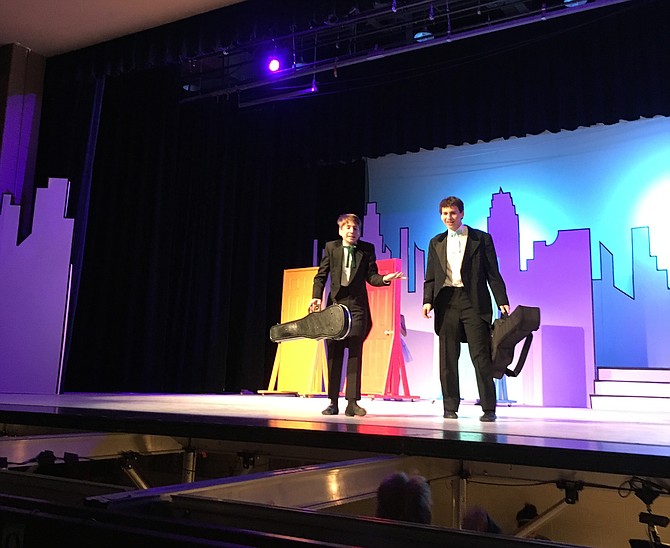 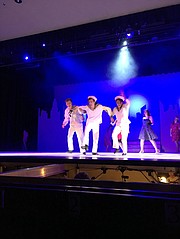 Connor Johnson, Matthew Millin and Eli Banks play sailors with a 24-hour pass in New York City in Whitman High School's production of "On the Town." 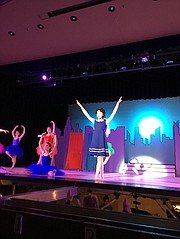 Arianne Banda is Ivy Smith in Whitman High School's production of "On the Town."

There will be singing, dancing and merry making at Walt Whitman High School this weekend when students present their fall musical “On the Town.”

“This show is kind of like the candy of shows,” said Kevin Hatcher, student director and producer. “It’s a comedy pure and fun with lots of music and dance.”

“On the Town” is a 1944 Broadway musical with music by Leonard Bernstein and book and lyrics by Betty Comden and Adolph Green. It is the story of three sailors looking for love in New York City during a 24-hour shore leave.

“As pointless as [the plot] is, there is a lot going on behind the scene,” Hatcher said. “There are 40 body mics, a lot of costumes, a lot of lighting and a lot of cues.”

During a dress rehearsal Sunday there were a few technical glitches, mics that needed new batteries, songs and dances to be synched with the orchestra, and prop placement to be tweaked, but everyone was confident the show would come together in the three days left until opening night Thursday.

Actors and tech crew took changes in stride as Christopher Gerken, adjunct faculty at Whitman and adult director of the show, stopped and started scenes to make improvements.

There are 38 students in the cast, about 40 in the orchestra and 110 doing tech work, Gerken said.

“I have more kids in the [show] than in all fall sports combined,” he said. “We are not a magnet school but are known for our arts departments. The music department is really a crown jewel.”

Gerken said he tries to create a high school version of a regional theatre, giving the students responsibility for all aspects of the show.

That works well for Harley Pomper who is the scenic designer and assistant technical director.

“I’ve learned a lot about problem solving and etiquette – how to treat your colleagues,” she said. “It’s a lot of practical skills … an exercise in adulthood.”

“This is a good opportunity for me to broaden my horizons,” he said. “I’ve learned a lot of responsibility. I trust myself more.”

On stage, the three sailors are played by Connor Johnson, Matthew Millin and Eli Banks. They see a poster of the month’s “Miss Turnstile,” Ivy Smith, while riding the subway and split up to look for her in the places she mentions as interests on the poster.

Millin, as Gabey, the part played by Gene Kelly in the 1949 film version, sings and dances his way through New York sites looking for Ivy Smith and finds her at Carnegie Hall taking a singing lesson.

Of course, there are twists and turns keeping Gabey from his love and when his buddies return with woman they have hooked up with he is still alone.

Ariana Banda is Ivy Smith. She has been in every show at Whitman except one in her freshman year, she said.

“In a lot of ways, it reminds me of my first show here, ‘Catch Me If You Can,’” she said. “I think this [musical] is super fun for the whole family. This is something fun to watch.”

General admission tickets are $10 for students, $15 for adults, all reserved seats are $20 — reserved seats must be purchased in advance. Tickets can be purchased online at https://whitmandrama.ticketleap.com/ or at the door on show nights beginning at 5:30 pm. Cash or checks only accepted for in-person sales. Visit the Whitman Drama website for details on all the ways to purchase tickets and request special seating.