The proposal is calling for a pedestrian-oriented mix of office, retail and residential uses. 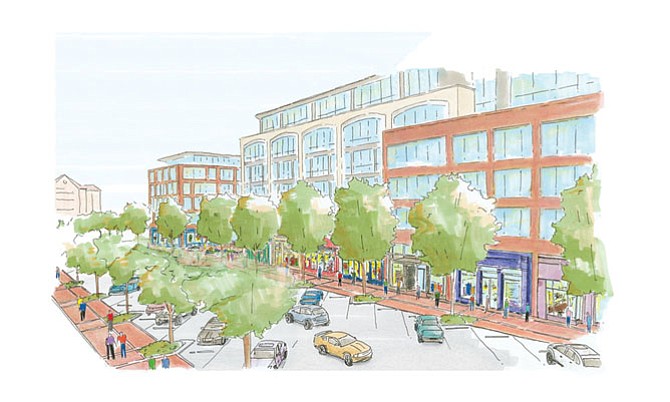 Different facades will be used throughout the buildings in the redevelopment, but the area will be tied together through uniform streetscapes and “rhythms of the structures,” said Ken Wiseman, design principal for CannonDesign who is the lead designer on the project.

The proposed redevelopment area is bordered by Beverly Road on the north, Old Dominion Drive to the east, Chain Bridge Road to the south and Ingleside Avenue to the west.

Center are working to revise their redevelopment plan to turn the spaces into one combined mixed-use development.

McLean Properties, which is representing project landowners, received so much feedback from the community — primarily concern over open space and building height — that it is going to modify its original proposal.

The project’s preliminary designs were first promoted to the public in February. A follow up meeting was held in the cafeteria of McLean High School on Tuesday, May 23.

The proposal is calling for a pedestrian-oriented mix of office, retail and residential uses and is based on a "Main Street" concept that is envisioned in the county’s comprehensive plan for McLean. The Giant grocery store and its parking lot, the PNC Bank and the Old Firehouse Teen Center on Chain Bridge Road will remain in place. The rest will be redeveloped.

The planned changes include reducing the heights of the buildings from the original maximum height of eight stories to a range of three to six stories. This has reduced the project by 225,000 square feet, according to Betsy Frantz, a spokesperson for McLean Properties.

The sidewalks have also been expanded to be between 15- and 17-feet wide. The pedestrian plaza that is the primary gathering space for the development has also been enlarged to about 15,000 square feet. A new and smaller public plaza was also incorporated into the design that is more than 2,000 square feet. Another space at the corner of Center Street and Redmond Drive was also added, which is about 3,500 square feet with outdoor seating for a restaurant.

These changes have also changed the project’s rent potential.

The decision to make the residential units condominiums or apartments or a mix of both has not yet been determined, according to Frantz.

Zeynel Abidin Uzun, owner of the Kazan Restaurant which serves Turkish cuisine on Redmond Drive in the middle of the redevelopment, is not worried about being forced out when the terms of his lease are up for negotiation in two years.

McLean Properties, which represents landowners of the development, have also reassured him and other local business owners that “mom and pop” stores are an important part of their vision.

But it was clear that the redevelopment would affect rent in ways that some merchants can’t cope with.

At the meeting, McLean Properties told the public that it would be helping relocate businesses to a new location at 1301 Beverly Road.

Details were not provided. In an email to the Connection, Frantz provided the following information:

“We are continuing to talk with our tenants about the types of space that they would like, and we are working with the county and Supervisor [John] Foust to find relocation options in downtown McLean for those tenants who would be displaced by the first phase of Main Street. The plan is to provide the opportunity for those businesses to move into their new spaces before construction on Main Street begins so that they can continue to operate with little or no interruption through the transition. One site that could be a relocation option is 1301 Beverly. Currently there is a two-story office building on the property, which we would replace with a one-story retail building. The new building could accommodate four to five tenants, which is about half of the businesses in the Old Dominion shopping center, where the first phase of Main Street is located. Even though the proposed building would be smaller than the one that currently exists, the property would need to be rezoned to allow a one-story retail building.”

McLean Properties filed a proposal for a comprehensive plan amendment and rezoning with the county in April. The Fairfax County Planning Commission and Board of Supervisors hearings were anticipated for November and December.

But this timeline will potentially be pushed with the anticipated changes McLean Properties outlined at the meeting once they are filed with the county.

“We have been working to incorporate the feedback we’ve received from the community and update the plan accordingly,” Frantz told the Connection over email. “The zoning application with all the technical sheets has not been updated yet.”

If the project is approved, construction could start in 2019 and its first phase could open in 2022.

THOSE IN THE AUDIENCE were not permitted to ask questions during the meeting. Instead, they were told they could submit questions in writing only.

“Not taking questions, it’s a way to shut us up,” said Joy Boston. “It makes me suspicious.”

Other audience members grumbled to each other after the meeting with, “I feel railroaded” and “We should have our own meeting where we call the shots” and “This is an outrage.”

The McLean Citizens Association Planning and Zoning Committee will be discussing the proposal during its meeting on Tuesday, May 30.

“As long as meetings like this are taking place, we don’t feel like we need to add more,” said Ron Bleeker, co-chair of the MCA Planning and Zoning Committee. “It’s still early in the process. There will be more meetings.”

Though Joanne Theon, who sat in the second row during the meeting, supports redeveloping the “unsightly” shopping complexes, she is skeptical of the plans.

“Common sense tells me that this is not going to be good for the community,” she said. “My main concern is congestion. We see what happens at Tysons. This won’t be the same congestion, but it’s more than I want to see. It’s going to be a nightmare.”