Building a place and community in Alexandria’s office park. 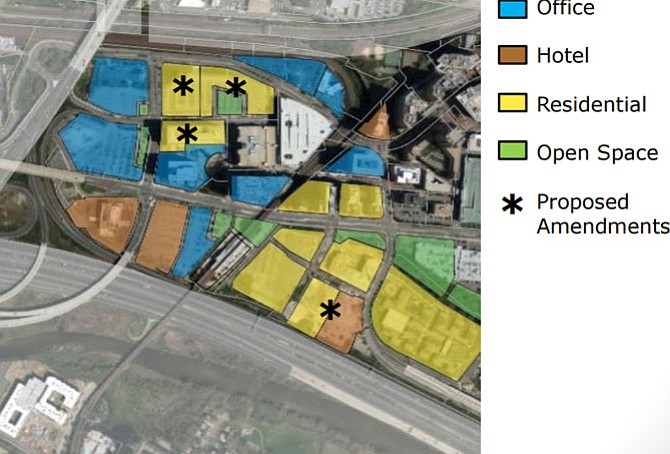 Old Town has the Waterfront. Del Ray has Mount Vernon Avenue. But what is the draw for Eisenhower? At a City Council meeting on May 23, the council faced the question of how to turn Eisenhower East from an office park into a neighborhood.

“The central issue is the conversion of some of the development that is existing office or planned office into residential-retail,” said Karl Moritz, director of Planning and Zoning. “That’s part of a conversation about office conversions city wide.”

Jeffrey Farner, deputy director for Planning and Zoning, said this is particularly crucial to encourage residential development in the Eisenhower area, where there has been limited population growth. Farner also noted that having a higher residential population in an area is what helps create retail opportunities and gives an area a stronger sense of community.

“Offices doesn’t tend to be a leader in an area,” said Farner. “Offices want amenities, like Metro and retail. While the number of employees per thousand square feet has increased dramatically [in Eisenhower], residential numbers have stayed consistent. If we’re looking at balancing employees and residential in the area, we need more residential square footage.”

Farner also said the city has observed a trend of home and work spaces merging and mixing.

“Residential and office spaces are becoming more fluid,” said Farner. “35 percent of residents at a new building in Eisenhower work at home. [These buildings] are designed to function more for people who work at home. When you walk into the lobby, it often looks like an office.”

To add more retail, Farner said the city is going to have to look at repurposing obsolete office buildings.

“[These buildings] have ceiling heights and depths that do not meet current best practices,” said Farner. “We need to look at placemaking and clustering of retail and the importance of having amenities.”

Finding a sense of place and community in Eisenhower was one of the main concerns of the council.

“There’s still no central place,” said Councilman Paul Smedberg. “Retail along side streets might be OK, but there’s still no central sense of place here. If we want it to be successful for commercial and residential purposes, we need some aspect of that. This concerns me. It concerns me a little bit in North Potomac Yard as well. It’s great to have people there. But if there’s nothing there for them, nothing to draw people there, it’s another generic area occupying a spot of land in northern virginia. You see a lot of that in Fairfax County.”

Farner agreed, saying it’s not encouraging to new visitors to the area to see surface parking lots surrounding the Eisenhower Metro station. Farner said the logic that office spaces should be clustered around the Metro still makes sense, but that it needs to be balanced with more regional development.

For many on the council, tearing down the outdated office buildings can’t come soon enough. Councilman John Chapman pointed to an outdated block of buildings as an example.

“Having a modern office is key for a lot of these spaces,” said Chapman. “In talking to a number of developers and folks in real estate, [some of these] buildings can’t hold an office anymore, not the new type of modern office that not only developers but companies are seeking. These buildings are so far out of line that something new needs to happen there. We can’t be expecting a company of that size to try and relocate there. We’ve been waiting for quite some time for someone to magically do that, but from what we hear in the development community that’s not going to happen.”

The Victory Center is further west of the area in question, but Councilwoman Redella “Del” Pepper pointed it out as another site that needs to start from scratch.

“The Victory Center … needs to be torn down and to start all over again,” said Pepper. “I think we need to keep those two in the focus. As long as I can remember, back to Vola Lawson’s days, she thought [the Hoffman Site] was just about the ugliest building and she kept wanting it redesigned. It was just a square box. No matter what they did, it never went beyond that look. Now here we are and we’re stuck with that building. I don’t know what the answer is.”

While the discussion focused around the Eisenhower neighborhood, the question of balancing land use is one with broader impacts across the city.

“This is some of the most significant land use discussions,” said Vice Mayor Justin Wilson. “These are pretty dramatic. I step back and think about why we pushed for decades for commercial, and there’s a necessity for commercial and office, but how we balance land uses and making mixed use really work … it’s a different driving rationale for us.”

According to Moritz, the Eisenhower East Phase One plan will be presented to the City Council in September.