Commuting on Two Wheels in Alexandria 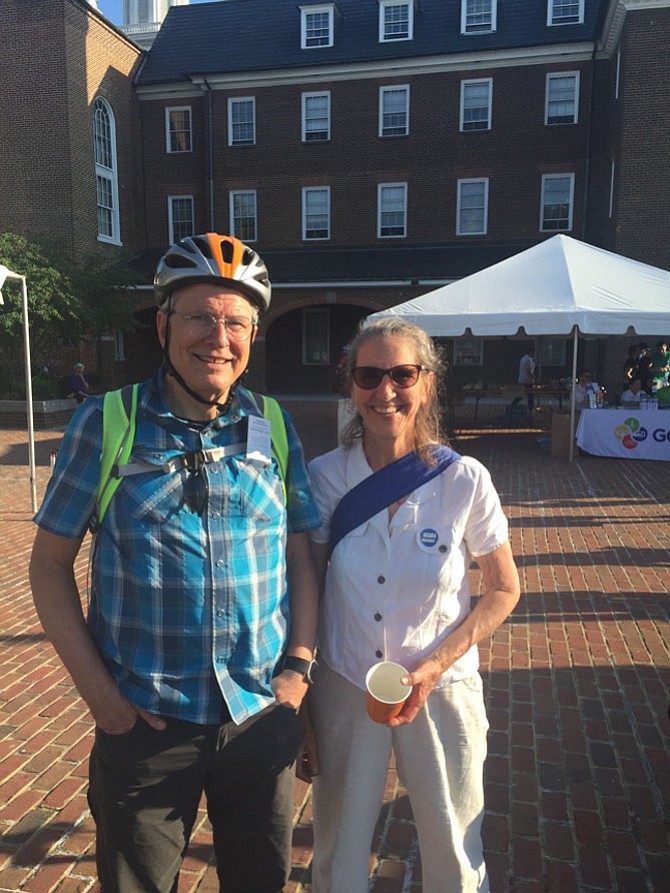 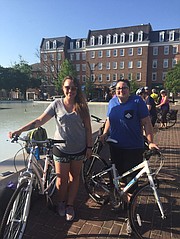 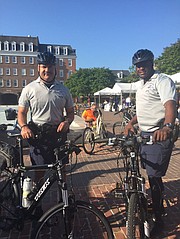 Hundreds of cyclists flocked to four stops across Alexandria on May 19, the annual Bike to Work Day. Vendors from local restaurants and bicycle repair shops came out to offer free snacks and check-ups for bikes.

“It’s been a great turnout,” said Carrie Sanders, deputy director of Transportation and Transit. “We had about 500 people come to this pit stop, and there are others in Carlyle, Del Ray, and the Mark Center. I’m happy to see such great weather too. It’s such a great event for us.”

Many of the cyclists in attendance are fairly new to bicycling as a commute. John Leacock rides from Braddock to the Pentagon, and though it’s a tiring ride, he says once he reaches his office it feels good to have ridden. Leacock rode as a youth and loved it, but as he grew up used his bike less often. As an adult he had a bike but rarely used it. After someone in his office who biked to work for 30 years encouraged him, he dusted off his bike and gave it a try. He’s still relatively new to the bike commute, having done it maybe 10 times, but Leacock says he’s hooked.

For April Johnson and Liz Golden, the morning ride to City Hall was all downhill. Johnson had a four mile ride from her home in Arlington to her work, ThinkFun Inc. Golden came towards City Hall along King Street, coasting down beside the Masonic Memorial on the newly painted bike lanes.

“I love riding into D.C. on the weekends,” said Johnson. “A friend told me about [bike to work day]. I would do this again.”

Like Johnson, Golden says she loves being able to take the Mount Vernon Trail into D.C.

“It’s free,” Golden said. “You don’t have to worry about parking. You don’t need any other technology. You’re not polluting. It’s exercise, but it’s fun. Plus, it’s really just nice to get out.”

Jim Durham, chair of the Alexandria Bicycle and Pedestrian Advisory Committee (BPAC), said Bike to Work Day is a great opportunity to those interested in cycling to take the plunge.

“They try it out and it feels great,” said Durham. “And it’s a chance for local organizations to meet the community and vice versa.”

Over the last year, BPAC has led an effort to teach cycling in elementary schools. BPAC raised funds and helped run a cycling program at Mount Vernon Community School and Polk Elementary School. More than $30,000 was raised. In the upcoming school year, that program will expand to six schools.

“That’s been my proudest thing in this last year, helping teach those kids to ride,” said Durham. “At the very end, everyone had learned to ride except one student who was struggling. The teacher asked for one more week with the student, and in that week he finally made the breakthrough he needed. All of the students were able to learn how to ride.”

Ruth and Tom Reeder have been riding together in Alexandria for years. Ruth Reeder used to work for the City of Alexandria and says she’s proud of the work the city has been doing to keep up with the growing demand for bicycle accessibility.

“There’s a lot more bikes on the road, and a lot more cars too,” said Ruth Reeder. “The city has done a good job of installing bike lanes.”

The Reeders live in Rosemont and say they love the accessibility to other trails that living in Alexandria offers. In addition to the Mount Vernon Trail, Ruth and Tom Reeder said they love biking over the Woodrow Wilson Bridge, or taking the Washington and Old Dominion Trail out west.

Both Prince Street and Cameron Street have recently had bike lanes installed with their resurfacing. A buffered bike lane was added on Van Dorn Street and to a section of King Street. Sanders said the next major projects coming up is a new bridge on the Holmes Run Trail over what used to be a fair weather crossing. As the city continues resurfacing roads, Sanders said they are continually looking for places that would support bike lanes, with a focus on streets around schools.