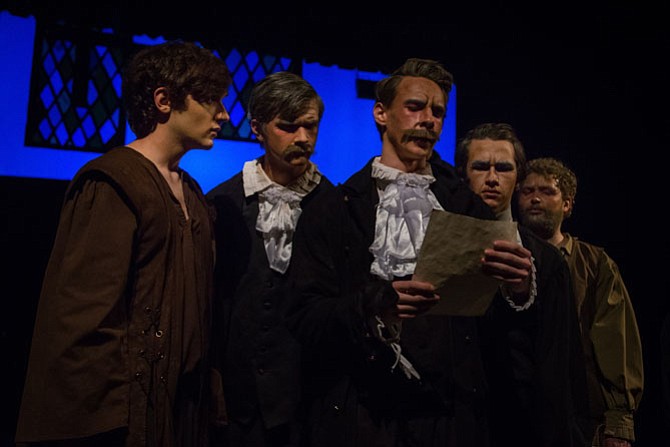 To suffer and die righteously, or to abandon one's morals and live — in 1692 Salem, those accused of witchcraft grapple with this fateful dilemma, while accusers and executioners saturate a toxic lust for power with manipulative religious pretext to promote personal gain at all costs. Vicious accusations fly as relationships are tested to their breaking points in Lake Braddock High's evocative production of "The Crucible."

Written by Arthur Miller, "The Crucible" premiered on Broadway in 1953, earning a Tony Award for Best Play. Set in the heat of the Salem Witch Trials, “The Crucible” serves as a powerful allegory for McCarthyism and the House of Un-American Activities Committee (HUAC) trials. In response to the controversial play, HUAC investigated Miller and he himself was blacklisted.

Centered around farmer John Procter's (Dylan Gottlieb) past extramarital affair with the young Abigail Williams (Kim Salac), “The Crucible” follows a trail of broken trust from a betrayed wife, to a vengeful lover, to a sickly society all too willing to forsake itself. Addressing tragedy and profound social messages, Lake Braddock's production proved maturely executed with excellent attention to technical details.

Displaying emotional depth and intensity as the aloof ex-lover, apologetic and adoring husband, and the iron-willed pariah, Dylan Gottlieb dazzles as John Proctor. Transforming from a swaggering assertive persona to a heartrendingly feeble one, Gottlieb leaves the audience reeling in the play's final poignant moments. As John's ever-patient wife Elizabeth, Erin Rose Coughlan masterfully embodies strength, selflessness, and quiet faith in the face of agonizing sacrifice. In disturbing contrast to Elizabeth's ever-present morality, Abigail Williams (Kim Salac) snaps from demure to seductive to satanic in seconds, revealing the psychological layers of a volatile egomaniac prepared to kill for a dead romance. Obsessed with her past liaison with John and bitterly resentful toward his wife, Abigail adroitly manipulates the court against all those who stand in her delusional path to John's heart.

A naive accomplice to Abigail's scheme, Mary Warren (Madison Hite) strikes a sweet balance of moral rectitude and social insecurity; Hite paints a sympathetic image of a woman bound both by the desire to do right by God and the overpowering urge to be accepted by her authoritative idol, Abigail. Especially noteworthy were the captivating performances of Tim Ellis (Reverend Hale) and J. Carlin Decker III (Deputy Governor Danforth). As the morally torn Reverend who slowly realizes the true horror of the witch trials, Ellis creates a genuine character with which the audience easily sympathizes. In contrast, Decker's emotionally removed, power-hungry, quasi-robotic Danforth chills the stage in eerie self-righteousness as he sentences the innocent to hang. Although some actors lacked authenticity, the play's overall acting impressed.

Ultimately, Lake Braddock's stirring production of "The Crucible" cannot answer whether one should perish righteously or live by forsaking one's values. But through the cast and crew's unrelenting energy, remarkable skill, and powerful message, the audience left with much to ponder.