20 Years of Running Celebrated in Clifton 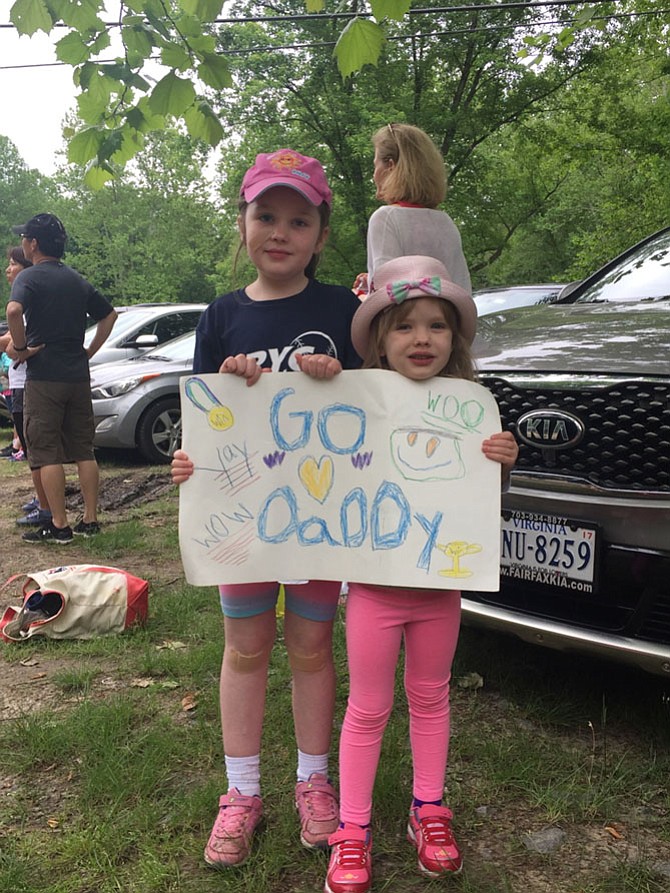 From left: Hannah and Delia McDonagh hold up the sign they made for their dad, Ciran McDonagh. Photo by Gretchen Kernbach/The Connection

By Gretchen Kernbach, The Connection 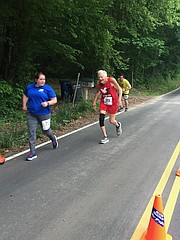 Robert Gurtler, 82, crosses the finish line of the 5K. The Plains local has run the Clifton Caboose all 20 years. 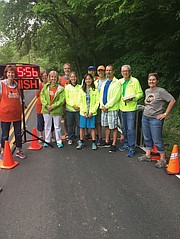 Community members gather at the barn for food and entertainment. 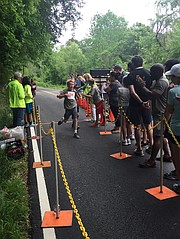 Neighbors and friends alike gathered on May 20 in Old Town Clifton for the 20th Annual Clifton Caboose Twilight Run. Newman Road was shut down from 5:30 to 7:30 so two different races could be put on — a 3K and a 5K, open to all ages.

Put on by the Clifton Betterment Association (CBA), member Lynn Strang said that planning takes “a lot of logistics, team work, community spirit and plenty of fellowship.” As part of the planning committee for the past four years, Strang enjoys how every year the fun run is bringing together old and new friends.

“It all comes together to create an event that really brings neighbors together for a fun Saturday afternoon where we get exercise, entertainment and a chance to celebrate 20 years of an event,” said Strang.

The overcast weather and relatively low temperatures made it the ideal weather for a fun run.

Among the attendees at the event were members of the Willow Springs Running Club, the Clifton Baptist Church and the Clifton-Centreville Animal Hospital. Several coworkers from the animal hospital wore matching shirts dedicated to Dr. Jamie Netschert, who lost his two-and-a-half-year battle to cancer back in November.

Running participants ranged in age, including dogs beside their owners and the youngest of children in strollers being pushed by their parents. Reston Runners was present at the race, responsible for setting up the finish line and a time clock.

The 3K occurred first, with Union Mill fifth grader Mason Hencken finishing first overall with a time of 6:59. Members of the Clifton Baptist Church sat in chairs alongside the road and rang cowbells for every finisher crossing the line.

Ice pops and participant ribbons were awarded at the end of the finish line.

The 5K was shortly underway after the 3K race ended, several of the runners partaking again just for fun. First to finish overall was 19-year-old Luke Jones, a rising sophomore at Virginia Tech, who finished with a time of 17:50.

Also partaking in the 5K was 82-year-old Robert Gurtler, who had no problem crossing the finish line. The Plains local has run the Clifton Caboose all 20 years.

Following both races there was an after-party held at the barn off Main Street. Watermelon, bananas, pretzels and other snacks were available to the participants as well as beer for those of age. Local bands Pleasure Train and the Randy Thompson performed inside the barn. Outside the barn on display were the sponsors of the event and all 20 Clifton Caboose t-shirts.

Attendees also enjoyed a giant bonfire — the youngest of them appreciating the moon bounce that was also present beside the barn.

First through third place awards were given out dependent on age groups and gender, as well as two scholarships. Winners received medals and gift certificates from sponsoring companies.

In addition, Cassidy Milne, William and Mary bound, and Emily Noonan, University of Virginia bound, both received $1,000 scholarships on behalf of the CBA.

After the award ceremony, runners and bystanders had the rest of the night to mingle with neighbors and friends over a fun afternoon of exercise.