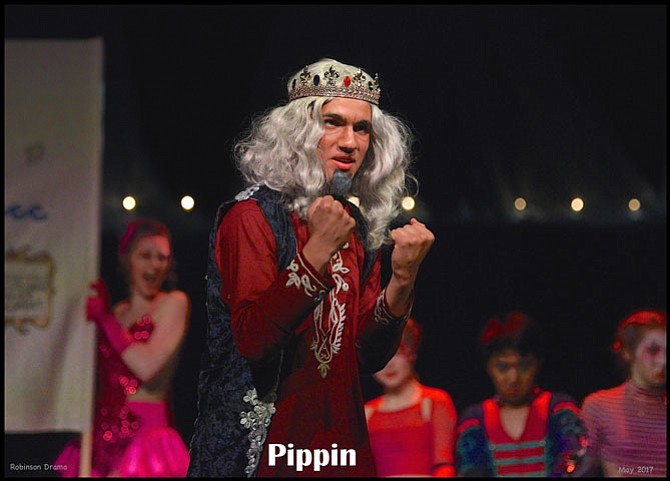 Fairfax — Robinson Secondary School "spread a little sunshine" in its performance of "Pippin" on Friday, May 5. From magical musical numbers to sultry songstresses, every moment of the show had the audience intrigued, mystified, and captivated. "Pippin" opened on Broadway for the first time on Oct. 23, 1972 and ran for 1,944 performances before closing five years later, but reopened with a popular revival in 2013, which then lasted two years. Both productions won multiple Tony Awards and are now a Broadway fan favorite.

"Pippin" follows the title character, Pippin, in his search for the fulfillment in life he craves. The story of Pippin is, in fact, a story being told by a circus troupe headed by the Leading Player and her ensemble. After trying multiple strategies such as fighting in a war, frolicking with women, and even killing his father and becoming king (his stepmother's plot), Pippin realizes none of those ways fits his definition of fulfillment and he runs away. When he stumbles onto an estate run by a widow, Catherine, he begins to learn that maybe finding fulfillment is more simple than he made it out to be.

Colin Diggs as Pippin took full use of the incredible character arc by starting the show off adorable and boyish, while slowly maturing, and finally reaching full emotional and intellectual maturity. His relationship with Catherine and Theo (Jordan James and Shane Wall, respectively) was sweet and real, which showed a new side of his ever-growing personality. The Leading Player (Hanna Kornell) started, continued, and finished the show with a bang, pulling all eyes to her with her sultry voice and dark presence. Throughout most of the show she had her stage face on as she was leading the troupe, but as the show continued and Pippin followed his own path, it shifted into a darker more controlling presence with a surprising and effective contrast. Notable performances include Jimmy Grimes (King Charles) with his subtle yet effective comedic display, along with Stephen Bosch (Lewis) whose comedic style was more physical and loud but just as effective. Pippin's grandmother Berthe (Sam Wallington) also got the audience chuckling during her sing-a-long number "No Time at All."

The ensemble was extremely strong in all aspects of their performance, including facial expression, energy, characterization, and choreography. A unique aspect of Pippin is the constant breaking of the fourth wall, which the ensemble fully took use of by going through the audience, sitting with them, and singing directly to them. In large contrasting numbers such as "Magic to Do" and "Morning Glow" they showed how unlimited their capabilities are; in "Magic to Do" the cast pulled of tricks, flips, and splits, while in "Morning Glow" they were still, strong, steady, and just as impressive.

The tech aspects of the show is what really made "Pippin" the spectacle it was through use of lighting, an immersive set, and colorful costumes. It is a difficult feat to pull of a high school show with no sound or light blips, but Robinson did it. When sitting in the house, the set reaches out into it giving the feeling of a circus tent, while on stage having more of a minimalist feel with the cast then bringing out the set and props themselves. Costumes raised the show to new limits and added pops of color that were true to the circus origin.

"Pippin" at Robinson Secondary School was an immersive whirl of magic, dancing, and adventure. Through the use of exceptional tech and costumes and featuring a strong cast, every moment was a new adventure.