Fatal Police Shooting on I-395
Votes

Fatal Police Shooting on I-395 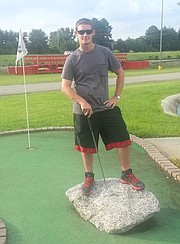 He didn’t have a broad group of friends, but some of those who knew Daniel George Boak, 28, best went as far back as elementary school together. According to his friend Antonio Starr, Boak clung closely to his small group of friends. Starr said Boak tended to be quiet and reserved. He owned a landscaping company in his hometown of Centreville called Live Lawn and Prosper, a reference to the traditional Vulcan blessing. When he looks back on his time with Boak, Starr says he’ll remember going bowling and playing mini-golf.

In short, Starr said there was nothing in Boak’s life that indicated he would injure a police officer on May 17, leading to his death by the Arlington Police Department.

“It’s surprising to read a story and hear that he meant any malicious intent,” said Starr. “It’s impossible to read that and believe it.”

According to Arlington police, at 4:30 p.m. a license plate reader indicated that a truck traveling south on Interstate 395 belonged to a wanted suspect. When police tried to stop Boak, they say he tried to maneuver around the officers. When Boak was stuck in traffic, the officers approached on foot. Police say Boak drove into one of the officers, pinning him against another vehicle. Officers opened fire on the vehicle, killing Boak, and then moved the truck to rescue the trapped officer.

Arlington Police spokeswoman Ashley Savage said the injured officer was taken to hospital with serious but non-life threatening injuries where he was released the next day. Police say life-saving measures were performed on Boak. He was taken to the Virginia Hospital Center, where he died. According to Savage, the shooting will be reviewed by the Commonwealth Attorney’s Office and internally within the Arlington Police Department for whether it was justified or not. Savage said the last death by police shooting in Arlington was in 2015, which the Commonwealth Attorney had ultimately ruled as justified.

Looking back to the days before the crash and shooting that killed his friend, Starr said a thick piece of legal-looking mail came in from Fairfax County. Starr said he saw that the letter was addressed to Boak. Looking back, Starr said it was likely the only indication that there was anything wrong before the fatal shooting. Boak was accused of attempting to falsify a drug test, a misdemeanor offense. A funeral will be held for Boak on May 24.