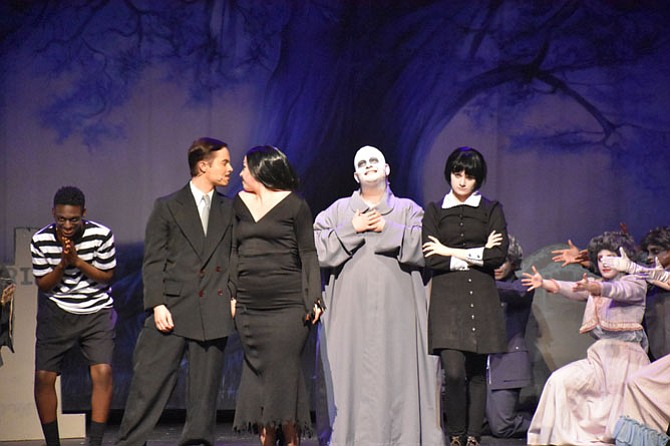 Do you see the world in shades of grey? Do you have a taste for death? Then you might be lucky enough to be a part of South County High School's “Addams Family.” Based on the Charles Addam's one-panel comics, the musical follows a family with a love for the morbid whose lives get turned upside down by their daughter's choice to step out of family tradition.

The stage is full of interesting characters from overture to final bows. The catalyst for the story is young Wednesday Addams (Maddie Gereski) who falls in love with a painfully normal boy, Lucas (Nick Ferlazzo). The two have decided to get married but want their parents' blessings. However, this would require the families to get along for an entire night. Featuring hilarious clashes between Wednesday's flamboyant father and histrionic mother, and Lucas' hysterical mother (Anna Luczynski) and man's-man type father (Rashaad Martin) — not to mention the torture-crazed little brother, Pugsley — the waifish old grandmother, who may or may not be family (Lulu Romero), and various Addams family ancestors: even "one normal night" seems next to impossible.

Featured in the cast was Craig Allison as the father of the family, Gomez. His performance was one of true commitment; his constant swagger and ability to take advantage of the difficult written and physical comedy kept audiences engaged and laughing the whole night. Sharing the spotlight with Allison was Doris Dougherty. A bright spot in the show, her featured songs such as "Secrets" and "Death is Just Around the Corner" brought energy to the show, and the night benefited greatly from her powerful stage presence and leadership. Dougherty's interpretation was fully developed and the commitment to her cartoonish personality brought the character to life. Together, Allison and Dougherty had great chemistry and were able to bounce off each other in a way that suggested professional theater.

In the supporting roles, Gus Cobba made a wonderful Pugsley. Taking advantage of every moment he had onstage, he endeared the audience to his plight and surprised listeners with his small script additions and fresh take on the childish character. Additionally, Jake Borenstein as Fester was extremely enjoyable to watch. Capturing the hearts of all with his small ballet-esque turns and heartfelt love-ballads to the moon, he had the entire audience cheering as he chased his love through a chorus of flappers and colonial soldiers.

The entire cast had a great chemistry that was fun to watch and made the show engaging and honest. The family interacted wonderfully due to their distinct personalities and execution of characters. While it is easy to go overboard with the dramatics of this show, the cast toed the line perfectly between comedic drama and uncomfortable overacting. The ensemble worked together like a well-oiled machine, creating characters and scenes between themselves that enhanced the richness of the story line and made the show visually interesting, while also staying connected and not distracting from the main action.

The Addams Family technical team gave a clean performance. The set changes were smooth, efficient, and quick. Despite the large cast, the choreography was very clean, and the group worked together with trademark unification. While there were some flubs with individuals' microphones, the cast recovered well and it did not seem to hinder their performances — a huge credit to the professionalism of the cast. All makeup and wigs fit the character very well and showed a close attention to detail and character choice.

South County High School presented a night of uproarious laughter and glee in “The Addams Family.”