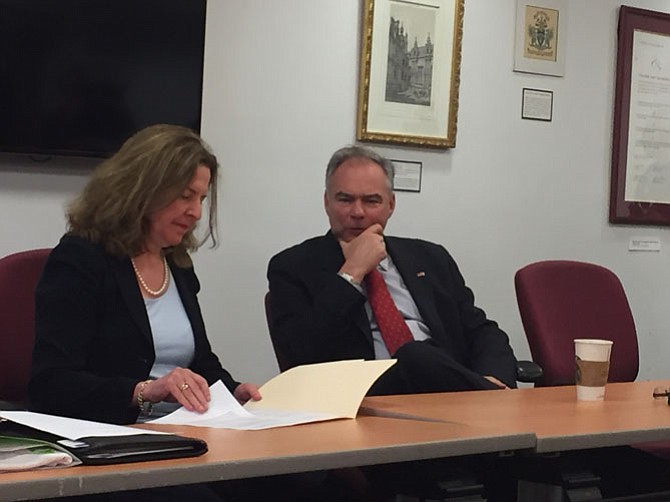 Alexandria — Eduardo Chandias Almendarez had witnessed a malicious wounding perpetrated by MS-13. Almendarez told the police and stepped forward as a witness. On Nov. 28, 2015, Almendarez was stabbed 96 times and his dying body was dumped into a drainage pipe in Arlandria.

It's a grisly story, but one repeated frequently throughout Northern Virginia. Another MS-13-related incident took place a few miles away less than one month earlier. Crimes related to MS-13 and other gangs have plagued the region for years. On May 16 in Alexandria’s City Hall, U.S. Sen. Tim Kaine brought together a panel of local social workers, law enforcement officers, and a T.C. Williams student who experienced life with MS-13 first hand to discuss the problem.

The student from TC started the discussion by trying to help the adults understand where gang culture comes from. The student, whose identity was withheld, lived in the Chirilagua neighborhood of northern Alexandria and said it’s commonly known to be owned by MS-13. Also known as Mara Salvatrucha, MS-13 was a gang that originated in Los Angeles in the 1980s but is now spread across the United States and Central America.

“People make a face of fear or surprise when you say you’re from Chirilagua,” said the student. “You have to be careful of what type of clothes or hats you wear, what types of letters, what types of colors. You don’t know who you will find in the street. People are scared to walk in the streets or to go into the parks after six.”

The student says people join the gang when they feel that they don’t fit into the community.

“There are people who have nothing to eat and nowhere to live,” said the student. “They have no security, but they feel it with these people.”

Kaine’s meeting comes a week in advance of the full Presidential budget being delivered to the Senate. Though he hasn’t seen the final document, Kaine says what they’ve heard from summaries is a discussion of reducing non-defense spending by $54 billion. Kaine repeatedly pointed to this topic and asked local officials how a cut in federal subsidies to Department of Justice programs would impact their abilities to prevent gang violence. For some, that meant a tighter crackdown on immigration and enforcement.

“My wife is an educator, so I understand the idea that every kid is [savable],” said Detective Ken Compher of the Fairfax County Police Department’s gang unit, “but that’s not true. Not every kid is savable. We’re getting kids in from other countries who have killed people. They’re being exploited by these gangs. Not every kid who crosses the border is bad, but also not everyone is a good kid.”

The student agreed that adults already involved with the gang entering the country and influencing children is a major part of the problem.

“Adults come here and spread the virus of MS-13,” said the student. “It starts as young as 6 or 7 years old. People go into the gang because they feel like they have nothing else. They wake up and go home, and there’s no parents because they’re at work.”

Fairfax County Police Captain Paul Cleveland noted that over the last five years, millions of dollars in earmarks to combat gang violence were disappearing and leaving police without the resources to tackle the problems.

“There is no magic approach,” said Cleveland. “It’s education, intervention, and enforcement. They all have to be funded the same. When one is underfunded it hurts the other two.”

But much of the discussion focused around changes that need to happen at a local level. The student praised his teachers, who had worked tirelessly to help keep him away from the gang, but he also noted that there are systemic divisions in T.C. Williams.

“Everyone knows the school is divided,” the student said. The first floor is for white students. The second floor is for black students. And the third floor is for Hispanic students. People don’t feel like they belong and they’re not comfortable. Then they go back to their Hispanic environment and feel that. You have people who are 19 or 20 years old who come to school and they don’t want to study, they’re forced to be there. They come in for the first class and then skip the whole day, and they often take other kids with them. I see this all the time.”

Kaine asked the student how he had managed to avoid gangs and crime, and the student answered that he hadn’t.

“I’ve hung out with MS-13 after school,” the student said. “I used drugs. I was in trouble with the police. It was social workers and teachers that saw potential, they see what we’re capable of, and they started to make me think of what I wanted in life. A strong connection to teachers helps. Some teachers take their own time to go to your door and ask why you’re not there in school.”

Representatives from Tenants and Workers United, a grassroots organization dedicated to social and economic justice, said that working towards restorative justice in the schools and offering more academic support for undocumented students can help close the academic and social gap between these alienated students and their peers.

Joe Runquist, the Gang Unit coordinator for the Alexandria Sheriff’s Office, said family responsibilities are what he sees most often pulling adults out of gangs like MS-13.

“For adults, it’s about their future,” said Runquist. “They have kids, they have families, they don’t want to do this anymore.”

For funding at a local level, Michael Johnson from the Department of Parks and Recreation said the city needs to work to make sure recreation programs aren’t so costly that they exclude the students who need them the most.

“Program costs have priced kids out,” said Johnson. “I don’t want a fee attached to late night programs. That just sends kids back out onto the streets.”

Johnson reflected on some of the 2016 homicides in North Old Town where he said he saw people, who knew each other or were even friends who took pictures together, turn around and kill each other as a result of gang affiliations.