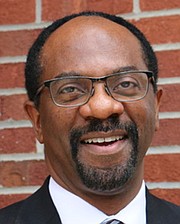 On July 28, Crawley will be leaving his position as superintendent of ACPS to accept a position at George Mason University as a professor in the graduate school for education. Crawley has been superintendent for four years defined largely by efforts to deal with rising enrollment and decaying school buildings.

Parents in ACPS reflected on Crawley’s tenure as superintendent. John Lennon was co-chair of the stakeholders committee that drafted ACPS 2020, the long-term strategic plan approved by the School Board in 2015. Lennon said in his work with Crawley he found him to be an outgoing and professional educator with a unique ability to work well both children and adults.

“He’s someone I’ve grown to respect a great deal on the job,” said Lennon. “He’s tried to address all of these problems comprehensively. I’ve come to appreciate his willingness to connect with the public school community.”

Joy Cameron, president of the Alexandria Parent Teacher Association Council (PTAC), said Crawley’s strength has been as a communicator between the schools and the community.

“He has always been really great about reaching out to PTAC and making sure we’re involved in various endeavors,” said Cameron. “It’s been a new era of good, strong data that he’s backed up a lot in his discussions. It’s important to have that solid data to present to the council when advocating on behalf of the school system … Under the previous superintendent, there was a bit of a cloud that continues to raise up when you’re advocating to City Council.”

Crawley came to ACPS in 2013, becoming interim superintendent after a succession of two controversial superintendents. Superintendent Rebecca Perry was bought out of her contract and removed from ACPS by the School Board in 2008. Her replacement, Morton Sherman, was also bought out of his contract in 2013 after an auditor's report exposed the “dysfunctional environment” in the budget office.

“One of the things that I think is fair to say about ACPS, [it] has been allowed through variety of reasons, not all related to superintendent, to deteriorate,” said Lennon. “Buildings are falling into disrepair. That has had an effect on educational programs and the morale of licensed professionals in the schools. I watched all of this as a parent. I’ve been impressed by his willingness to look to the future. He has been able to recommend to the School Board all kinds of fixes that need to be put in place.”

Lennon noted that this hasn’t come without its own share of controversies. On May 4, the City Council passed a $242.6 million budget in operating funds and debt services for FY 2018 and Capital Improvement Plan allocation of $373 million over 10 years with $19 million for FY 2018 projects. This still leaves ACPS with a $2.1 million gap. Add/delete sessions for the school budgets will be held on May 18 and May 23, at 7 p.m. in the School Board’s meeting room at 1340 Braddock Place to discuss narrowing this gap.

“The most recent CIP plan for renovating schools has caused quite a bit of consternation among taxpayers who don’t like the idea of property tax increases, but those of us in public schools are willing to see this as investment,” said Lennon, noting that part of his faith in seeing this as an investment is inspired by Crawley’s dedication to data-driven investments. “He has a long-term outlook, more than some of the superintendents I’ve worked with in the past. He’s a good long-range planner.”

While Crawley would not comment on the school system under previous superintendents, he noted that there were several major areas where he tried to make progress in the school system. Crawley said he tried to cultivate strong relationships between the schools and the local community. Part of that was committing to a strategic plan and a long-term Capital Improvement Plan with support from the community. Crawley noted that the CIP not only works to address capacity issues over the next 10 years but helps to modernize schools.

The council also began the process of creating a Joint City-Schools Facility Investment Task Force to review the CIP and make recommendations for prioritization of funding. $11 million was approved and held in contingency. Crawley said the task force will help to plan over the long term, and that he hopes it takes into account the assessments and analysis from the schools when it looks at school priorities.

“It’s a different dynamic,” said Crawley. “[The results] are yet to be seen. It’s a new venture for both the city and the schools. There will be lessons learned.”

The new Joint Facilities Task Force will be one of several new challenges and opportunities Crawley will hand off to his yet-unpicked successor.

Cameron agreed that understanding long-term planning is going to be critical for the next superintendent.

“I think that we’re going to need someone who is familiar with the type of work that needs to be done,” said Cameron. “We do have a significant capacity issue, construction is going to be a big topic. It’s going to be important to be flexible in our approach to what schools look like.”

That flexibility goes beyond just the physical locations and appearance of the schools. Cameron said the new superintendent is going to have to lean into the early college program and the various multicultural programs aimed at the school district’s diverse population. Primarily, Cameron says the parents need a superintendent who will include them in communications.

“[The next superintendent is] going to have high expectations from parents in the area,” said Cameron. “There are a lot of parents who expect a lot from our school system. Interaction and feedback from the superintendent are critical. [We are] in an urban setting, but we do have a small town feel, and we do expect access and conversation.”

Cameron said that Crawley had helped include parents more in the conversations about schools. She praised his “Coffee and Chats” sessions with parents and noted that he changed many of the meetings on issues to evenings instead of earlier in the day to give parents a chance to be involved.

When Crawley departs, he leaves behind a school system undergoing transition. Maury Elementary School, Cora Kelly School for Math, Science and Technology, Mount Vernon Community School, and T.C. Williams High School are all changing principals in 2017. Crawley noted many of the positions are being filled with existing staff.

“This is an opportunity to be excited about big changes in the school system,” said Crawley.

In looking at the new leadership in the school system, parents seemed hopeful. Lennon said he was happy to see Peter Balas get the job at TC. Balas had previously been a teacher, administrator, and executive associate principal at TC before moving to the Mount Vernon Community School. Lennon said Balas’ experience across the school system made him an ideal candidate for TC.

“My outlook for the future of TC is positive,” said Lennon.