Along King Street from the Waterfront
Votes

Along King Street from the Waterfront 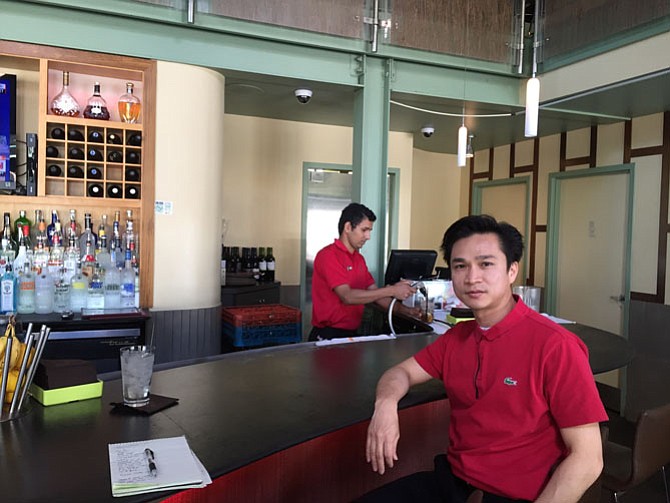 Dave Nicholas, a managing partner and co-founder of Vola’s Dockside Grill, in the attached Hi-Tide Lounge.

First in a periodic series.

Every storefront in Alexandria has a story. Up and down King Street, workers in local restaurants and retail work to provide services and industry that keep Old Town active, while entertainers bring life to the streets. Block by block, the Gazette Packet shares their stories.

When Sorakrit Poolchuay looked at the Alexandria waterfront 13 years ago, he saw opportunity.

“It started with the waterfront,” said Poolchuay. “We thought this area was a good neighborhood, with lots of tourists.”

Poolchuay and some associates were part of the founding of Mai Thai, a Thai restaurant at the very end of King Street.

Over the years, Poolchuay said the clientele has swelled to include tourists from around the world. Poolchuay said his most proud moment was when they got a review in from Germany saying that, if you come to Alexandria, to go to Mai Thai.

“I was so proud,” said Poolchuay.

And yet, throughout the years, it’s been the local clientele that has remained steady. Poolchuay said in the beginning of summer lots of tourists come through and the restaurant is very busy, but as winter sets in the tourism starts to taper off. Poolchuay says it’s then when they see a lot of their loyal customers coming in, keeping the business going through the lowest tourist seasons.

“I’ve seen people who have come in here for 13 years,” said Poolchuay. “We have a guy, Craig, I see him every week.”

Vola’s Dockside Grill opened Aug. 25, 2016, after a two-year development process. Dave Nicholas, a managing partner and co-founder of the restaurant, said there was a visible need for an affordable full service restaurant at the end of King Street.

“We’re very casual,” said Nicholas. “Our silverware comes in bags. We have brown paper towels at the tables. Our concept is better seafood in a basket. We wanted to give it a shack feel. We’re catering mostly to the local crowd. We’re not aiming to be a tourist trap.”

In picking a name for the location, Nicholas said they found former City Manager Vola Lawson’s influence throughout the city was something that had come up over and over again. Nicholas said it was a name local residents knew, so they adopted it to honor Lawson.

Originally, the part of the restaurant facing South Union Street was going to be closed off as private dining. However, Nicholas said that corner has some of the best people watching in Alexandria. The side room was rebranded as Hi-Tide Lounge, a local cocktail bar.

The development process faced some challenges, however. The space had no hood system, so no food could be cooked on an open flame. Nicholas said they had to negotiate with the two stories of office space above them to run a shaft up through the building to install the kinds of grills the restaurant would need. Installing the hood was the piece of the project Nicholas described as the most challenging.

Then there was the issue of Vola’s opening in the fall.

“It’s a summer concept here,” said Nicholas. “It’s fish in a basket and cocktails, so we had to make adjustments. We had to make a menu and change our entrees to feel hardier.”

But now that summer is finally coming around, Nicholas said Vola’s is ready to fully embrace that original summer concept. At Vola’s and Hi-Tide Lounge, Nicholas says the restaurant is kicking off a frozen drink program, playing around with ideas like frozen sangria.

One of the largest changes coming to King Street is the proposed development of an Old Town Business Improvement District. While Nicholas recognizes it will bear an additional cost for local businesses, he said he believes it will help the city look more attractive and vibrant.

Before Vola’s. Before Mai Thai. There was Jamey Turner. He doesn’t have a brick and mortar location, but for 25 years, Turner has been setting up his glass orchestra at the end of King Street.

“This is one of the most incredible sounds,” said Turner. “Working with glass is my favorite sound in the whole world. It’s just extraordinary. You get very close to a pure sinewave. It’s surreal.”

Turner first heard the sound when he was 6 and his father played the glasses at the dinner table. Though he was always musically inclined, Turner said his turning point towards playing the glasses came when he discovered one of the Beethoven pieces he was playing on the clarinet had originally been composed for the glass orchestra in 1814. Over the years of working with the instrument, Turner has also become an expert in the history of the glasses, noting that over 400 pieces of music were composed to be played on glass.

There’s a science to the instrument as well. Turner says he only uses distilled water. The molecules are tighter and it’s easier to produce a sound than with tap water.

His favorite part of playing is when he can introduce someone from far away to the instrument. One morning in May, Turner encountered a group of tourists from Korea. Turner played a popular, traditional Korean song that he knew and one of the women in the group started crying.

“It’s very profound,” said Turner. “It’s something you could never do with clarinets. Something about this sound is so pure.”