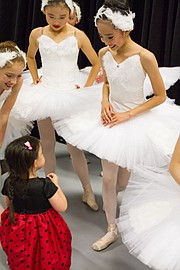 Children meet the dancers after each performance. Swan Lake, and other ballets in Classical Ballet Theatre's Children's Series, introduce classic ballet to the young and young-at-heart.

Sunday, May 6-7, for young audiences at its studio on Victory Drive. Approximately 20 dancers, aged 11 to 18, performed six sold out shows.

“Swan Lake is one of the most well-known classics and it’s a very challenging ballet,” said Kathy Beyer, who teaches at the studio. “Technically, it’s some of the hardest corps de ballet work that dancers can take on and we wanted our dancers to experience that as well as get to know this ballet.”

Love was in the air.

“Prince Siegfried gets a crossbow for his birthday and goes to hunt swans, but then he runs into Odette and it’s love at first sight,” de la Paz said. 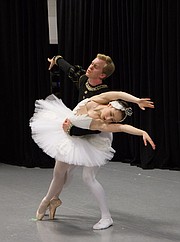 movements that the 19th century Russian ballet dancer Lev Ivanov choreographed into the second act is Beyer’s favorite element of the ballet.

“It’s unique in all of the ballet repertoire,” Beyer said. “It’s brilliant choreography that’s been handed down decade over decade, and I think the history of the choreography and how consistent it has stayed over the years is fascinating.”

It was challenging for the lead ballerina.

“You’re a swan, so you have to have mannerisms that are swanlike,” de la Paz said. “That’s really different from any other ballet because you’re trying to portray an animal. What’s really challenging is the port de bras [carriage of the arms] and trying to do swan arms.”

But she enjoyed the task at hand. 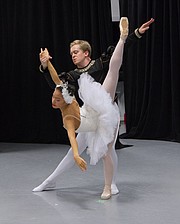 Herndon High School Freshman Claire de la Paz, who has trained at the studio for nine years, danced the role of Odette. Her dance partner was Philip Smith-Cobbs, a Classical Ballet Theatre graduate and professional dancer.

Dancing a pas de deux — a duet — with Philip Smith-Cobbs was de la Paz’s favorite part of her performance. Smith-Cobbs, a professional dancer and alumnus of the studio, returned specially to dance the role of Odette’s lover, Prince Siegfried.

“It’s really fun to dance with somebody else,” she said. “I only started partnering about a year ago, so it’s kind of new for me.”

Training for and performing the show was special for de la Paz and her teacher.

“It feels beautiful doing it and it’s beautiful to watch,” Beyer said.

When Beyer was 16 years old, she was coached to play the role of Odette in Swan Lake by Canadian ballerina Anna-Marie Holmes at the Kirov Ballet in Washington, D.C.

“It’s a very fond memory for me,” she said. “The emotion of the role, as well as the beauty of the movement, it’s just one of my favorites.”

PASSING ON THE EXPERIENCE to de la Paz and her other students in her adulthood was a gratifying experience for her.

“It wasn’t just doing the steps because she gave us a story behind what we were doing,” de la Paz said.

The ballet was part of the studio’s Children’s Series, which are shorter programs designed and performed specifically for younger audiences.

“It’s our introduction in say a 45-minute performance that can introduce younger audiences to ballet and ballet classics where they can stay focused, concentrated and interested,” Beyer said.