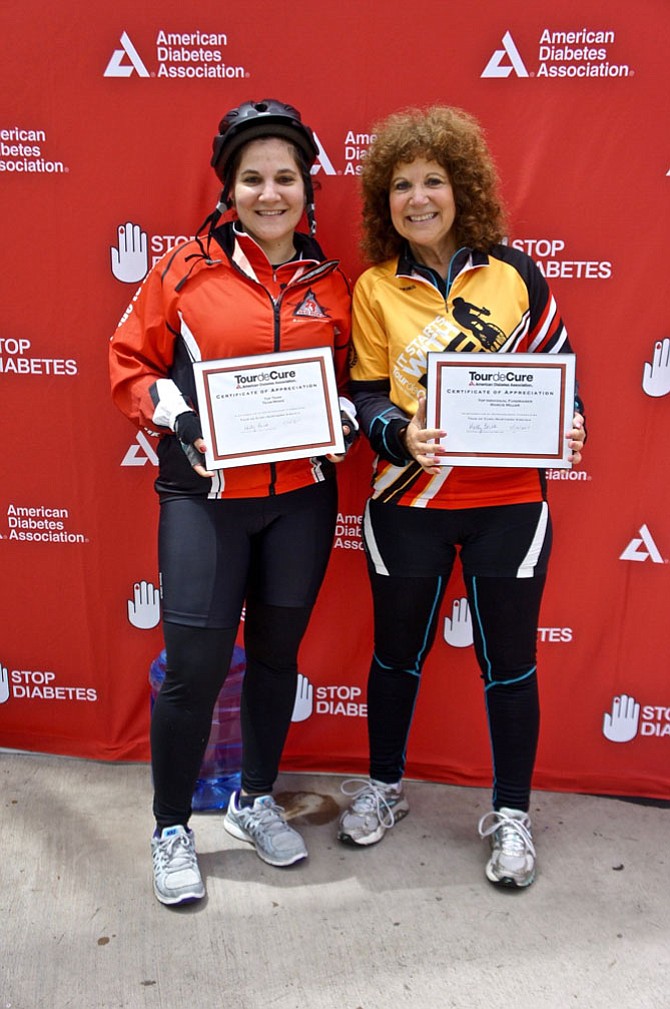 Mother and daughter dynamic duo,from left: Claire Gebauer, diagnosed with Type 1 diabetes at age 3, rode the 2017 Diabetes Tour de Cure as captain of Team Moxie. The team won recognition for #1 fundraiser among Family/Friends teams. Mom Marcie Miller of Reston earned kudos for raising the most donations as an individual – for the fourth year in a row! Photo by Andrea Worker.

“You did it, Daddy!” 6-year-old Martina Cohen welcomes dad David at the finish line, while mom Jenny snaps the shot. David, founder of Team Red of Northern Virginia – red jerseys denoting riders with diabetes – acted as a Tour Marshall at the event.

Not all team members are riders. From left: Rachelle Grey, Emma Boone, Kate Huddleston and Emily Grimm await cyclists from the DCI Group. In addition to cheering on their colleagues, these four raised funds for the team effort, as well.

Members of the Octagon Club, a community service organization at Dominion High School in Sterling, did a number of volunteer jobs at the Tour de Cure, including cheering in the riders as they arrived at the finish lines. Weary faces broke out in smiles at the welcome.

With staggered starts from 6:30 a.m. to 10:30 a.m., more than 500 bicyclists took off from Reston Town Center on a mission to end diabetes in the 13th annual Northern Virginia Tour de Cure, organized by the American Diabetes Association National Capital Area (ADA). Even before mounting their bikes or lining the route in support, individual riders, family and friend teams, and company teams have been working to raise funds for diabetes research, education and advocacy. By the time the Tour had begun, organizers announced that more than $300,000 had been raised toward a goal of $400,000 – all to aid the D.C .region, where the ADA has helped more than 200,000 families and individuals living with the disease.

As one of the most pervasive diseases in the country, the ADA predicts that by the year 2050, 1 in 3 Americans will be living with the disease. In the DC region, the rate of those affected continues to climb. In 2013, 7.8 percent of the population had diabetes. In 2015, the number had risen to 9 percent.

“If you think you don’t know anyone who has this disease, just ask 10 people of your acquaintance and you will find out that you’re wrong,” said David Cohen of Fairfax.

COHEN CAPTAINS the team that he founded – Team Red of Northern Virginia. “Red Riders” are riders who actually have the disease. They wear red jerseys to show their status. “I am passionate about keeping myself fit, supporting others with the disease, and helping them see that they can continue to live full lives,” said Cohen.

Cohen has taken that passion to the next level, helping to start other “Team Reds” and riding in other events and raising funds. This year, Cohen was a Race Marshall as well as team captain, assisting others out on the course. His Team Red of Northern Virginia also took first place for funds raised by company/organization teams, posting more than $20,000 in donations.

Top honors for fund raising by a Family/Friends team went to Team Moxie, making 112 percent of their $11,500 goal by race time. This achievement could have something to do with team member Marcie Miller of Reston who picked up her certificate for Top Individual Fund Raiser – for the fourth year in row.

“I can’t believe this is my 12th year,” said Miller. “I am not the kind of person who is comfortable asking people for donations,” she admitted, “but I do this for my daughter and for all those who live with this disease.” Miller’s daughter, Claire Gebauer, is captain of Team Moxie – and someone who was diagnosed with Type 1 diabetes at the age of 3.

FOR THOSE WHO WONDER if a Tour like this might be too challenging for their bicycling abilities, the organizers want to remind everyone that there are several different courses to choose from. The experienced and hardy riders were able to opt for the 106-mile ride, while those who just wanted to get out there, show some support and raise a few dollars, had the option to take the 4-mile Herndon Caboose Fun Ride. There were several in-between courses, as well.

Team ATCS, captained by John DePasquale, went for the 55-mile Blue Ridge Climb Route, for their second appearance in the Tour. Their riders came from all around the area, including Fairfax, Clifton, and Falls Church. The group shares the common bond of being work colleagues at the consulting firm, and the desire to “get out there and do something. So here we are,” said DePasquale.

For those not convinced they could get around even the 4-mile course, there is still a role to play in next year’s race. Team DCI, a Family/Friends team, brought along a support group who not only waited at the finish line to applaud their riders’ efforts, but who also raised funds, bringing Team DCI into second place for funds raised behind Team Moxie. School groups also helped out at the event, volunteering to man a number of different booths, working the registration and catering tables, and even acting as cheerleaders at the finish line.

The 2017 ride may have be completed, but there is still time to donate, either to a favorite team or directly to the American Diabetes Association. The final tally won’t be completed for the NoVa Tour de Cure until July 31, those wishing to donate can visit www.diabetes.org, searching Northern Virginia Tour de Cure.