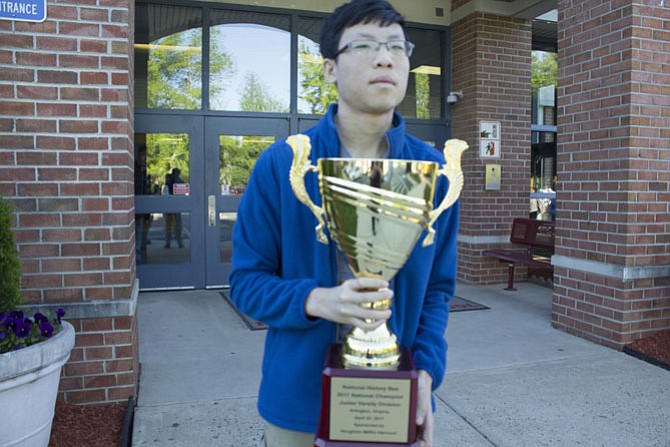 McLean High School Freshman Justin Young, 15, the national champion of the Junior Varsity National History Bee hopes to recruit a team to compete with him next year. Photo by Fallon Forbush. 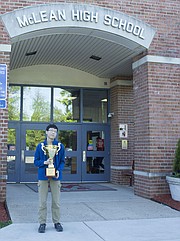 Bee, beating out his peers from across the country in the Junior Varsity Division.

Top history students from across the country gathered in Arlington from Friday, April 21, to Sunday, April 23, to compete in the 2017 Varsity and Junior Varsity National Championships of the National History Bee. After the three days of buzzer-based quiz competition, Young was named champion of his division.

“It’s something that I started liking in elementary school,” Young said. “I liked reading when I was younger, so I read many history books.”

“There are huge amounts of books on WWII,” he said.

THE NATIONAL HISTORY BEE is a buzzer-based history quiz competition for individual students. The high school level of the competition is split into two divisions: Varsity for juniors and seniors and Junior Varsity for sophomores and younger, including middle and elementary school students.

Students compete against each other in a series of rounds where they attempt to be the first to ring in and answer paragraph-length questions about various topics in history.

Each correct answer results in one point. Competitors finish a round once they score eight points and are also eligible to earn up to seven bonus points based on how quickly they finished the round. At the state and regional tournaments, there are three preliminary rounds, which equates to 90 total questions, plus a final round for the top students to determine the champion.

Students who finish in the top half of the preliminary round totals qualify for the National Championships, which consists of six preliminary rounds of 35 questions, plus a series of three playoff stages to determine the national champion.

“Forty-six [playoff rounds] was when I reached 50 points,” Young said.

Young ate a sizeable meal with his family at a nearby Ted’s Montana Grill to celebrate his victory. Competition would begin early in the morning and last well into the night, so he had built up a champion-worthy appetite.

Young also competed solo in the team competition, finishing in fifth place as a one-man team.