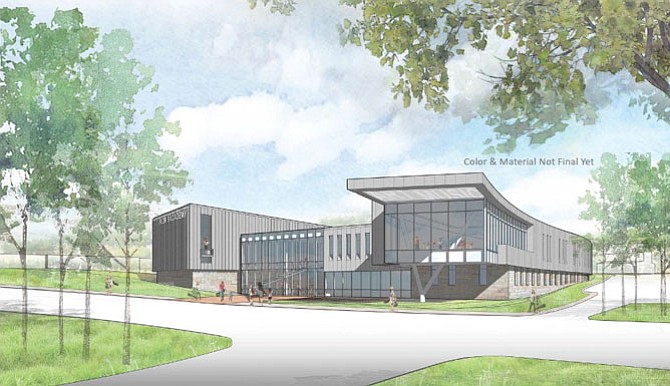 Artist rendering of the Facade for The Conservatory of Fine Arts, a 48,000-square-foot project proposed by Scimores Academy, LLC. The Hunter Mill Land Use Committee recommended land use approval for their application.

Artist rendering of the Facade for The Conservatory of Fine Arts, a 48,000-square-foot project proposed by Scimores Academy, LLC. The Hunter Mill Land Use Committee recommended land use approval for their application.

The Hunter Mill Land Use Committee met April 18 at the North County Government Center in Reston regarding a rezoning application with special exception for land. The property is located at the intersection of Centreville and West Ox Roads, adjacent to Frying Pan Park. Six of the eight acres would need to be rezoned.

Andrew A. Painter of Walsh, Colucci, Lubeley & Walsh, P.C. represented Scimores Academy LLC, the applicant. The company is based in McLean and headed by venture capitalist, Herman K. Balasundaram. Painter explained the applicant would like to use the land for the purposes of building a 48,000 s.f. Conservatory For Fine Arts for children 4-18 years of age. The project cost would be $40 million. Classes would be held after school, early evenings and on the weekend thereby limiting traffic impact during rush hours.

Painter opened his remarks with the statement that as the appeal had been addressed two times before by the Hunter Mill Land Use Committee, the purpose of the meeting that night was to vote, to make a decision.

DURING THE PUBLIC MEETING attended by homeowners in the area, Painter addressed issues raised at the December meeting — the historic district status of the land, Park Authority coordination, reuse of existing homes, view and sight lines, as well as green building commitment, pedestrian signalization, parking in adjacent neighborhoods and widening of West Ox Road.

Painter opened saying his client would protect what's there, some of the only remaining historic buildings in the Floris area, homes and outbuildings currently on land not protected by the county — land that by right currently allows for 40,000 s.f. of commercial business, such as a strip mall. The applicant's layout is key, Painter continued in his remarks, as it would allow for the retention of the property's three historic farm buildings, provide scale changes between the road and the Conservatory and allow the property’s rural character to be better understood by visitors. The proposed layout would complement the adjacent Frying Pan Park owned by the Fairfax County Park Authority which, Painter said, "has no money to purchase the property."

According to Painter, the conservatory would be LEED-certified, the most widely used green building rating system, thereby enhancing environmental preservation through sustainable architecture and storm water management. The build would feature wetland gardens, green roofs and permeable paving in the parking lot spaced for 236 vehicles. A parking coordinator would be hired to facilitate cooperative parking between the park and the conservatory as well as monitor and address any neighborhood parking concerns.

Painter explained the project would provide pedestrian connectivity for surrounding communities as sidewalks are added while at the same time reducing traffic compared to what other potential developments could generate. The conservatory would synergize benefits for the church (adjacent to the proposed development on Centerville Road), Frying Pan Park, and the community. The proposal for the conservatory would preserve 58 percent of the property as open space.

PHYSICALLY the conservatory would include performance spaces, specialized classrooms, and studios of varying sizes for both individual instruction and ensemble groups. Painter said the applicant's proposed conservatory would offer classes in the fields of music, dance and movement, and creative and visual arts to students ages 4 through 18. During the slide presentation, Painter depicted a program that would facilitate the dispersion of fine arts education in an underserved area of the county and augment arts educational programs offered by Fairfax County Public Schools, private and parochial schools, the Fairfax County Park Authority, and local arts organizations.

Painter stressed that Fairfax County is in need of additional arts education facilities, community-based arts centers, and performance spaces. He spoke on how arts education encourages discovery, connectedness, and challenges students to become sustained, self-directed learners and how the study of the fine arts positively impacts the learning of students of all socioeconomic levels and promotes social skills that enhance the awareness and respect of others.

In conclusion Painter said, "I've never seen a client so passionate to do the right thing.... It (the conservatory) will be a cultural gem, one linking Frying Pan Park with the school.”

Leslie Adams, who lives across the street, asked about the number and location of entrances. Painter said there would be two new entrances on Centerville Road, positioned there to reduce traffic on the two-lane road in front of the current entrance to Frying Pan Park, which would be retained yet widened.

Edward Umbrell, committee member, said that he was excited to see the application especially with its respect for the historic nature of the site.

Motion to approve the received application passed by unanimous vote.