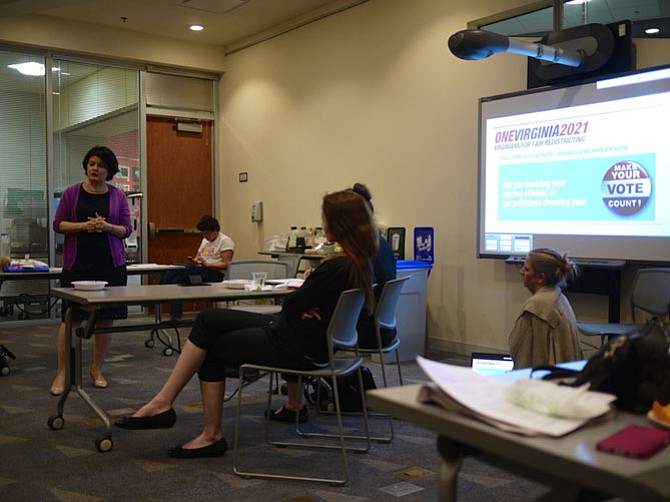 State Sen. Barbara Favola addresses the We of Action Virginia meeting at Shirlington Library on May 1. Photo by Eden Brown.

State Sen. Barbara Favola (D-31) believes Virginians can turn the Virginia House of Delegates around from its current Republican control if enough new voters come out and vote in the November 2017 elections. Those who have just gotten the right to vote — immigrants and students — sometimes don’t know the legislative elections for their state assembly are just as important as the federal elections that take place every four years.

Speaking to a “We of Action Virginia” group at the Shirlington library on May 1, Favola said she is energized by the increased interest in Virginia politics. She highlighted the importance of keeping a Democrat as governor of Virginia. “We have to elect a Democratic governor even if you aren’t a Democrat,” she urged the group. “Independents, Progressives, moderate Republicans need to think about what could happen here if we end up like North Carolina, with a GOP governor and GOP control of the state assembly. When that happened in North Carolina, wIthout the moderating influence of a Democrat in the governor’s role, there were no brakes on the extreme legislation that started getting passed. In July 2016, after the North Carolina legislature passed ‘the “bathroom bill”, eliminating anti-discrimination protections for lesbian, gay, bisexual and transgender people, the National Basketball Association pulled the 2017 All-Star Game from Charlotte to protest the law,” Favola said.

Favola cited a few of the more conservative GOP candidates for office: “Corey Stewart, chairman at-large of the Prince William Board of County Supervisors, who seems to have a love affair with the Confederate flag,” she said. “I was with him during my tenure on the County Board when we were both being interviewed by a news outlet and he never acknowledged the important contribution of immigrants to our economy.”

She also highlighted Karrie Delaney, who will be attempting to unseat GOP Del. Jim Lemunyon (D-67) in Fairfax/Loudoun County. Lemunyon, Favola said, is “one of those Republicans who package themselves as moderates, but they vote with the Republican leadership every time.”

Favola described the difficulty of trying to pass health-care friendly legislation in Richmond: she took on the Medicaid expansion issue, which she felt qualified to do since she used to have oversight on the Medicaid program when she was in the federal government. She shepherded the expansion legislation through the General Assembly, dealing with every objection raised by the GOP. Every reasonable request the GOP raised — and there were many — the Democrats accommodated, because “we wanted 400,000 people to have this insurance. But when it came time to pass the legislation, it was the week Eric Cantor lost his primary, and the GOP said they had to withdraw their support because Tea Party candidates might take advantage of the situation and they would lose their seats. House majority leader, Eric Cantor, was defeated by a Tea Party-backed economics professor who had hammered him for being insufficiently conservative; Cantor was criticized for being soft on immigration. “It was clear it was ‘incumbency protection.’ not the welfare of Virginians, that was a priority,” Favola said. “The way the districts are drawn leaves no incentive for negotiation,” she said. Favola will be pursuing the redistricting issue this summer given the importance of better bipartisan cooperation.

Favola also described other transformational legislation which had been hard to pass in an assembly dominated by the GOP: Virginia had stopped benefits to foster children over the age of 18 (and under 21). Favola wanted to maintain support for youths who otherwise could become victims of sex trafficking or homeless. Legislation prohibiting the possession of a weapon by people who had committed two-time misdemeanor sexual assaults was also a bill sponsored by Favola, and which ran into major GOP headwinds.

Favola said she hopes the trend in Virginia, to elect a governor who is not of the the U.S. president's party (this has been the trend for 40 years with one exception), will hold. That said, she said Ed Gillespie, the presumed frontrunner on the GOP side, has a well-funded campaign and is the architect of the strategy that gave 38 districts to the GOP: he is someone Democrats and moderates will have to pull together to defeat in November.

Favola told the group to hold elected representatives accountable, and to educate themselves on who the candidates are, referring them to the website: www.vahousedems.org.