The iconic musical by Andrew Lloyd Webber and Tim Rice. 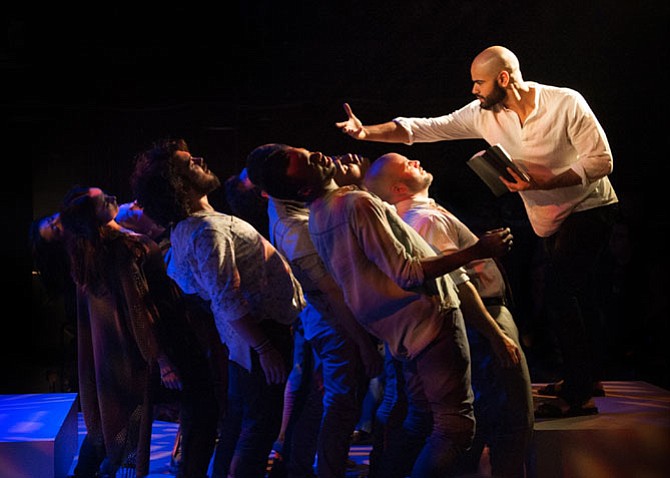 Nicholas Edwards (Jesus) and the cast of "Jesus Christ Superstar," which plays at Signature Theatre now through July 2. Photo by Margot Schulman

Signature Theatre in Arlington is presenting the musical, "Jesus Christ Superstar," now through July 2. This version of Andrew Lloyd Webber's and Tim Rice’s award-winning rock opera is done in a sleek, modern production.

Based on the 1970 rock opera, the all-musical production features the songs “What’s the Buzz,” “I Don’t Know How to Love Him,” “Everything’s Alright,” and the title song. Joe Calarco ("Gypsy") directs this epic of celebrity, passion, guilt, and salvation. The story is based on the Gospels' written accounts of the last week of Jesus's life. It made its original Broadway debut in 1971 with all songs and no spoken dialogue.

Director Joe Calarco said it's a show he's always wanted to direct. "It has one of the most thrilling scores ever written for the theater," he said. "And it was revolutionary — not just in its music but also in how it asks the audience to look at Jesus as a man with the vulnerabilities of any human being."

He added: "It was quite controversial when it premiered and I've always been interested in unearthing that initial provocative energy."

Calarco said the play was originally written as a concept album, so taking that music and have it work as pure theater has been a thrilling challenge. "And people know the pieces so well that we wanted to do honor to the show but also allow people to see it with fresh eyes," he said.

As for audience takeaways, he said: "I hope they leave talking about the complexities of faith and how fanaticism can warp who and what we worship. And it's a great score and I hope the audience leaves being reminded of how thrilling the piece is."

Nicholas Edwards is playing the lead role of Jesus of Nazareth. "I'm sure you know who Jesus is, but in our production we're trying to uncover the struggles that Jesus went through as 'just a man,' not the Divine Christ he is today," he said. "He comes into the story trying to spread his new ideas but slowly discovers that the burden of having to be a savior may be too much for him to handle."

Besides the difficult musical score, he said the piece is an emotional rollercoaster. "Right from the beginning, I had to sit down and plot all of my character's 'shifts,'" he said. "Jesus is incredibly complex; on one hand he is full of love, but on the other he is full of doubt and confusion, and throughout a lot of the story he is angry. It's hard to balance it all in a way that makes his journey clear to the audience."

He added: "And with a spare set, we really have to use our bodies to the fullest in order to tell the story."

He thinks audiences will never see a production of "Jesus Christ Superstar" quite like Signature's. "I really hope they leave thinking about how powerful faith and religion really is. And how even today, our world is constantly in a power struggle between religion and politics," he said. "Finally, I hope they see not the Biblical figures they read about in their Scriptures but real people struggling with real human emotions."

Signature Theatre in Arlington is presenting "Jesus Christ Superstar" now through July 2. Show times are Wednesdays through Saturdays at 8 p.m.; and Saturday and Sunday matinees at 2 p.m. Tickets are $40 to $99. Specialty Nights are Discussion Nights on June 7 and 13; Pride Night on June 23; and Open Captioned Performances June 4, at 2 p.m., and June 6, at 7:30 p.m. The venue is located at 4200 Campbell Ave., Arlington. Visit www.sigtheatre.org or call the box office at 703-820-9771.