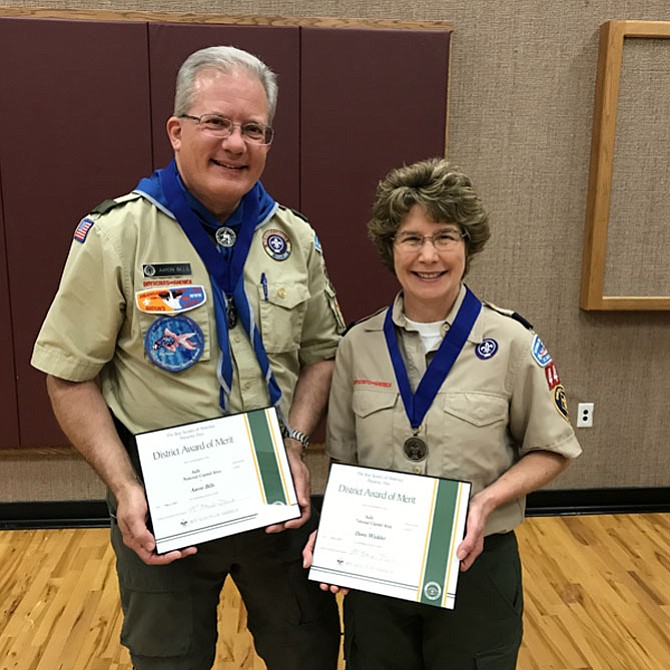 These citations were read as the award was presented to them:

‘Aaron started his scouting experience as a youth in the Milwaukee County Council in Wisconsin. Through Cub Scouts and Webelos, he earned the Arrow of Light and crossed over to Troop 142, where his father was a Scoutmaster. Aaron achieved the rank of Life Scout. In the midst of excessively pondering his Eagle project and as a rising 11th grader, the family relocated to Arizona, which neatly de-railed his Scouting activity.

“His formative Scout years had developed a sense of resourcefulness and purpose. His son Alex became active in Cub Scouting and Webelos at Pack 1860 where Aaron was an active parent assisting with campouts and activities. His son Alex crossed over to Troop 577 where Aaron continues to serve as an active parent and Assistant Scoutmaster. He is a Brotherhood member of the OA and is the Troop Adult Advisor to the Troop Order of the Arrow representative. He is an active participant in the OA’s Sully Chapter. He provided a high level of camping activity and troop support including Troop 577 FOS Unit Coordinator where the unit over performed its goals. He has been a high adventure Troop expedition coordinator for Northern Tier, Seabase, and Philmont.

“Aaron became the Sully District Vice Chairman for Finances and coordinator of the Sully District FOS Program in 2015 and has coordinated the FOS campaign over three years with 100+ percent achievement of the Sully District goal. A fixture at District and Roundtable meetings, he has been persistent to the point of annoyance, a verbose advocate of Scouting whose soliloquies have tested the patience of Randy Young and Dan Kurtenbach at Roundtables. He is focused on task, and developing new FOS revenue streams with a goal of making Sully District the most revenue-productive of all 23 Districts in NCAC.

“He is currently the Strategic Advisor to AOC Solutions and was a founder of 3 Delta Systems, Incorporated.”

“Dawn Winkler grew up as a Girl Scout, but as a mother of a Cub Scout and a Boy Scout, she has become deeply involved with the Boy Scouts of America. She has made significant contributions to Scouting at both the Unit and District levels.

“Dawn has served Pack 448 as a Den Leader for four years and as an Assistant Den Leader for one year. Dawn has also been actively involved as a Camp Coordinator for Pack 448. She earned the BALOO certification and has led Pack 448 campouts for six years. She has also promoted and coordinated the Pack expeditions to Day Camp at Camp Snyder and at our own Sully District Twilight Camp

“Dawn volunteered to become the Unit Kernel for Pack 448 shortly after her oldest son joined Cub Scouts. She served as a Unit Kernel for three years and enjoyed the opportunity to motivate Scouts and support the financial stability of the Pack. She then served as Sully District Kernel for two years, helping to provide a successful fundraising program for 20 units within the District.

“In addition to Scout activities, she is an active member of Vienna Presbyterian Church, serving as a Sunday School Teacher and a Vacation Bible School Leader for eight years and teaching ESOL classes at church for over 15 years.”