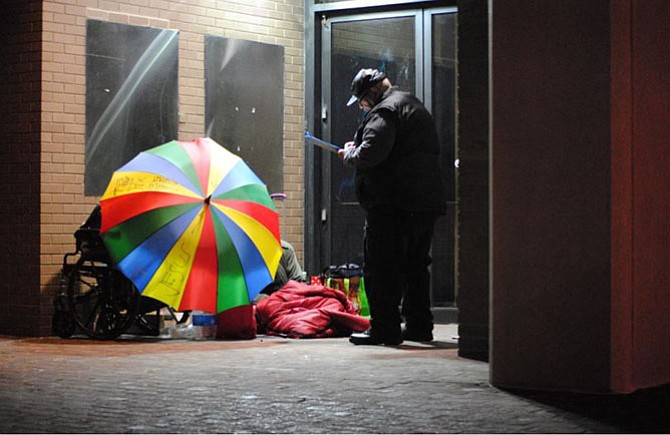 Every year, the Metropolitan Washington Council of Governments releases a snapshot look at homeless populations in the region. Exact homeless population counts can be difficult to ascertain, so the Point in Time survey is one of the few indicators of the status of homelessness in each locality. Since 2013, the Point in Time survey has shown that Arlington County has halved its homeless population, from 479 in 2014 to 232 in 2017, 51.7 percent decline. But in 2017, the number was an increase by 58 people. The number of people in families who were homeless rose from 50 to 85, while the number of individuals who were homeless increased from 124 to 147.

“Look over the last four or five years,” said Kathleen Sibert, president and CEO of Arlington Street People’s Assistance Network (A-SPAN), “We’ve declined by 51 percent. That’s what everyone in this field looks at: the trends.”

While County Board leadership expressed pride at the long-term trends, there was also confusion over what caused the uptick in 2017.

“I can’t explain it,” said County Board Chair Jay Fisette. “It doesn’t really make sense to me. Maybe it’s accurate. Maybe it’s an aberration. Staff doesn’t understand it either.”

One of the primary causes could be an imperfect methodology. The Point in Time study is conducted on one night in every locality throughout the region. The total population of homeless living in shelters is calculated while others in the streets search for homeless. Many suggested the weather could have played a factor in the changing numbers. Hilary Chapman, housing program manager for the Washington Metropolitan Council of Governments, said 2016’s count was taken in blizzard conditions, so many of the usual camp sites were abandoned and there weren’t as many homeless people in the streets. In 2017, conditions were much better, so the camping sites were occupied and there were more homeless in the street. Six of the nine jurisdictions saw their unsheltered count increase in 2017, which accounts for 10 percent of the total.

Chapman also added that Arlington’s homeless population was small enough that a small number in persons can make a percent increase of the “rate of change” seem larger than it actually is.

Professor Frank Shafroth, the director of the Center for State and Local Leadership at George Mason University, said rising housing costs could have played a part in the increase in homelessness.

“Home appreciation in Arlington over the last decade has increased 23.7 percent,” said Shafroth in an email. “That cannot help but put pressure on rents. At the same time, some of the budget and civil service cuts made by the administration have cost jobs. That is why there is a focus on trying to increase the supply of affordable housing available to the lowest income households.”

Sibert says while rising housing costs are a problem for Arlington, it would be unlikely to affect the homeless population.

“For someone really poor, the housing price increase wouldn’t affect them,” said Sibert, “they couldn’t afford it anyway.”

Sibert emphasized that many of the people in extreme poverty in Arlington are only able to work part-time jobs, some having to care for children and being unable to afford childcare, others with mental illnesses that keep them from being able to hold down longer term jobs. In these jobs they might be making $6,000 to $8,000 each year.

“Their salaries aren’t going up at all to match the cost of housing, but they would never be able to pay for housing here,” said Sibert. “It’s too expensive, that’s why we have housing subsidies and affordable housing developers. They won’t be able to afford anything in this region.”

“There is naturally occurring affordable housing in Arlington, and as developer pressures increase, those older garden style apartments are being pushed out,” said Chapman. “I disagree that people can’t afford to live here. Housing cost could be a barrier to entry, but many of our homeless were already living here and paying market rate rent. We saw with the foreclosures in the financial crisis that a number of people lost their homes and it had a dramatic impact. It wasn’t an immediate transition into homelessness, but it filters down.”

Like Sibert, Chapman said the more important lesson of the study was the long-term progress. Chapman said Arlington, and several other localities, has shifted its strategy on homelessness to a “housing first” policy.

“There used to be an idea that you would get people to a place where they were ready for housing,” said Sibert. “Now, we get people into housing first, then we deal with the other issues. If they have housing, they don’t have to worry about showers … sleep … or drying clothes. They are not exposed to the elements. It’s been the biggest shift in providing homelessness services and it really works.”