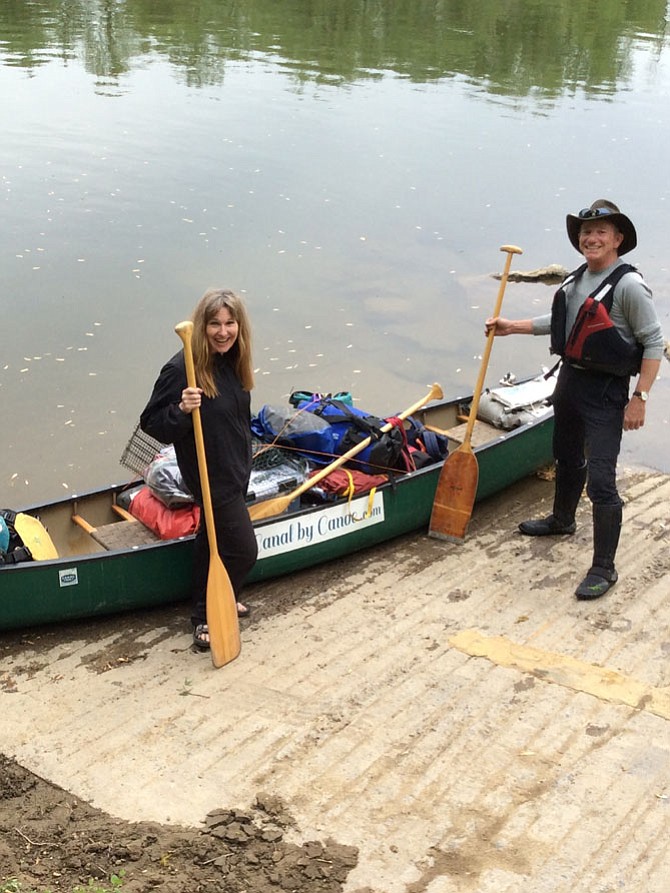 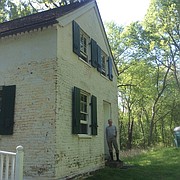 Joe Hage at Canal Quarters Lockhouse 28 in Point of Rocks 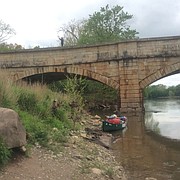 Joe Hage silhouetted at sunset in canoe at Edwards Ferry.

Mary Kearney and Joe Hage’s first date in 2012 was canoeing down the Potomac River, a favorite activity for both. The courtship continued with many more outdoor activities — hiking, biking, camping, birding and lots more canoeing. The couple discovered that paddling a canoe in tandem was ever so wonderful — and thus, they spent more and more time together in “synchronized paddling.”

Four years ago they decided to launch a new adventure — canoeing down the 184 miles of the Potomac River that runs from Cumberland to Georgetown along the C&O Canal. The couple decided to raise funds for the C&O Canal Trust and to post a blog with photos about their “Canal by Canoe” journey.

“Once we spoke to the Canal Trust about our idea, we could really instantly feel the love, support and appreciation,” Hage said. Each year the contributions have increased and this year, they reached an all-time high of $1,750. With the match of the “Live Like Jack Fund,” their total donation to the Canal Classrooms Bus Scholarship Fund for Outdoor Education is $3,275. These funds give 650 children in need the opportunity to attend an outdoor education program at the C&O Canal National Historical Park.

For the past four years, Kearney and Hage have crammed their canoe full of food and supplies and set off on their two-week canoeing adventure down smooth water and rapids, through rain, snow, sleet and hail — but also on sparkling bluebird days on the river. They pack a six-day cooler to the brim with gourmet food such as filet mignon and Caesar salad and then stuff in their camping gear, Gore-tex garments, comfortable sleep pads, tent, cooking stove, utensils of every sort, beer, wine, chairs — and Hage’s ukulele. Sometimes they stay at a B&B or one of the Canal Lockhouses, but often they pitch a tent at one of the Canal Lock parks along the way. Sometimes they cover 20 miles and sometimes only a few, depending on the weather and the speed that the Potomac River is running.

This year, they chose a shorter trip, launching their canoe on April 24 at Harper’s Ferry and ending at Sycamore Island, just south of Old Angler’s Inn. They spent their first two nights at the Brunswick Family Campground where their host came down with a truck, picked them up along with all their gear and canoe (as Kearney said, “We don’t exactly travel light!”). He took them to the campground and then to their launch site. “We are fortunate that many people help us portage around dams and areas where we cannot canoe,” Hage said. “It’s really difficult trying to lug our gear and the canoe.”

However, Kearney said, “Joe is really strong and can singlehandedly lift the canoe above his head and carry it the distance we need to go – but it’s a real help when people come to give them a hand – or a truck.”

On this trip, the weather did not cooperate for the first six days. Even though each day was cold and rainy, they managed to find some good ripples, delectable places for lunch and shelter for two nights at Lockhouse 28 (circa 1830) located near Point of Rocks. There they enjoyed meeting Canal walkers, joggers, bikers and interested passersby, listening to the trains (that ran 50 feet from their quarters), taking photos and enjoying the period furniture and photographs in the Lockhouse. Their canoe trip from Point of Rocks to Noland’s which are 4-and--half miles apart, involved heavy rains and lots and lots of mud in their canoe.

Finally on day 7, their perseverance paid off and the rains ended. They canoed seven hours from Meadow Island to Edward’s Ferry, past the Monocracy Aquaduct. Hage wrote in his blog, “The Monocacy Aquaduct is amazing and is considered the finest canal structure in the U.S. It was severely damaged in 1972 but thanks to some passionate individuals, and groups, it was restored in 2005.”

The next day, they traveled 16 miles to Swain’s Lock through Class II rapids. Hage described the terrain: “This part of the river below Violettes Lock is known as ‘Seneca Breaks and Blockhouse Point Rapids.’ It isn’t quite as challenging as the section of whitewater that we did upstream but on this day the river was higher, and we had a fully loaded canoe. We decided not to follow the ‘Potomack Canal’ route on river-right and opted for a center line, right down the middle of the old rubble dam. The roar of the rapids muffled everything as we picked up speed and dropped over the first ledge of the old dam. We did our best to keep the canoe upright as we picked our way past the huge expanse of big rocks, islands, and deep ledges. We made it beyond the rubble dam but the river kept dropping so we had to stay focused as we navigated our barge-like canoe through the choppy waves. Every time that we thought we could relax, there was another hole to avoid. Then it was over. We were breathless and our hearts were thumping, but in less than 20 minutes of continuous whitewater, we had covered almost four miles! Now, finally, it was gravy time. No dams, no whitewater, just free- flowing river, with the wind at our backs for the last five miles down to Swain’s lock and the camp ground there. Life is good!”

Hage said, “Mary is fearless. She’s in the front of the boat — that’s the scariest place to sit. She’s also terrific as shopping and packing the most delicious meals for the trip and bringing along items that make a campsite a home — such as our own portable shower and even a kitchen sink.”

Their most humorous experience happened at Swain’s. They stayed there on Saturday, one of the busiest days for the Canal. They viewed the usual hikers, bikers, fishermen, Scout groups and other campers. Big families, speaking many different native languages gathered for picnics, REI was holding a nature photography class, a man from Tucson was camping at Swain’s to attend three marches in Washington — and an entire yoga class of 25 set up with their mats and did poses for two hours.

Kearney wrote, “One woman was doing her poses next to a tree, embracing it and leaning on it — maybe not knowing that the tree and the ground beneath it were completely covered in poison ivy!” The same group (perhaps minus the poison ivy victim) returned at 7:30 a.m. the following morning for another two-hour class. Kearney concluded, “After being first amused, then annoyed, then amused again by the yoga people, we realized that it’s all part of the ebb and flow of life at Swain’s. People from everywhere just come to the river. They always have. They always will. And we’re so lucky to have places like Swain’s that make it easy for all of us to go down to the river whenever we need renewal.”

On their final day, they left Swain’s and were able to canoe the C&O Canal, waving to on-lookers as they passed by. However, the water in the Canal ran out before they got to Old Angler’s Inn, so they had to portage back to the Potomac. They took their first whitewater drop at Offutt Island, where they met some kayakers and paddleboarders. One of them shouted out, “Welcome to the neighborhood!”

Their trip came to an end at Sycamore Island, where Hage is the caretaker for the Sycamore Island Canoe Club. (Kearney is a former immigration attorney.) The two plan to embark on a fundraising trip down the Potomac and Canal again next year and are looking forward to more adventures both on and off the river. To read their blog about their trip and to view their photos, go to www.canalbycanoe.com. Donations can also be made through this website to help more children experience the joys of nature and the C&O Canal.