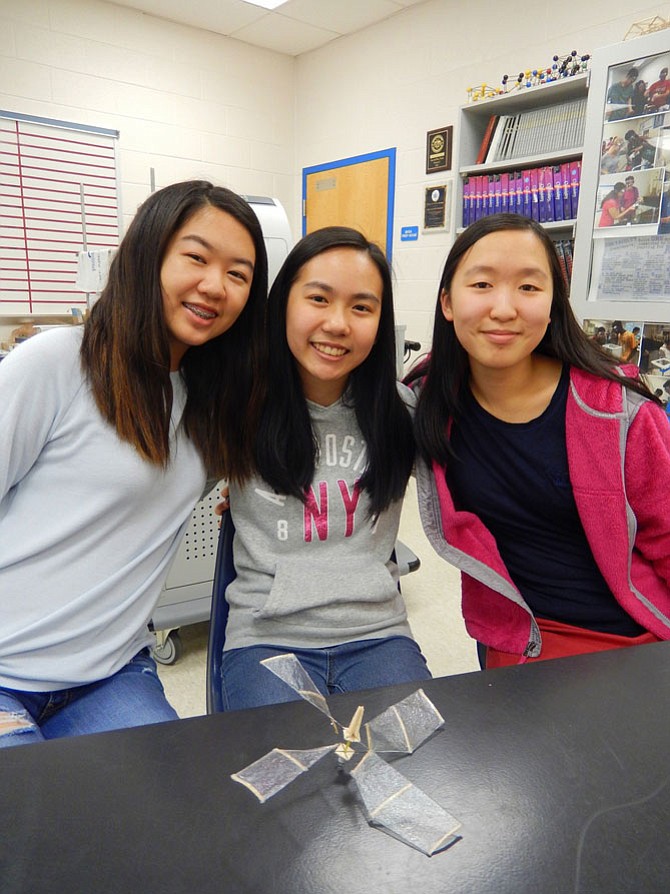 From left: Grace Ko, Janessa Jiang and Emily Sheng with the helicopter they designed and built. Photo by Bonnie Hobbs.

Many times, a school’s athletes and actors get most of the media’s attention. But at Fairfax High School, a talented and creative group of science students is proving every bit as worthy and is now receiving national acclaim.

The members of the Science Olympiad club have competed in six tournaments, this school year – at MIT, the University of Pennsylvania and Cornell – winning 137 medals, including 36 for first place. They also won Regionals and, on March 24, Fairfax captured the State Championship at UVA in Charlottesville.

It marked the fifth time Fairfax won it, and this year’s victory was especially sweet because the team beat the second-place finisher, Thomas Jefferson High School for Science and Technology, by a whopping 25 points. And on May 19-20, Fairfax will represent Virginia in the 33rd annual National Science Olympiad at Wright State University in Dayton, Ohio.

“This is the strongest and hardest-working team we’ve ever had,” said science teacher and coach Cathy Williams. “They’re also close-knit and collaborative and help each other where needed.”

Comprised equally of boys and girls, Fairfax’s team contains students from diverse backgrounds and cultures. “Science Olympiad instills a sense of hard work, determination, leadership and curiosity in the team members,” said Williams. “Through this club, they’ve developed skills for success in school and beyond. Our alumni have attended some of the country’s most prestigious universities and work in numerous scientific fields.”

GOING TO NATIONALS will be team captains Sarah Wasinger and Markus Williams, 15 core members, four more for trial events, plus the coach and two student managers. They’re currently putting finishing touches on their projects and are thrilled about winning States.

“Just knowing the resources T.J. is given and their legacy in science competitions, in general, was intimidating,” said Wasinger, a senior. “But I told our team, ‘We’re all just high-school students. If we put in the work, there’s nothing stopping us from beating them or doing just as well. And we’re just as intelligent.’”

“They started piling up, and it was really exciting,” said Wasinger. “When we were halfway through, we thought, ‘We might win this.’ You never know. But when they announced TJ as second, I screamed. It was really rewarding because it’s a lot of work.”

STUDENTS COMPETE in three, broad categories of events – knowledge, lab and engineering – with crossover between them. Some students specialize, but each competes in three or four events. For example, junior Grace Ko does Forensics, Chemistry Lab and Write it, Do it.

In Write it, Do it, she explained, “Someone builds a structure, which I don’t see. And my partner, Janessa Jiang, has to write me directions on how to make it – which I then do. We use inexpensive, household items such as straws, Popsicle sticks, LEGOs, etc.”

Jiang, a junior, also does Towers, Helicopters and Experimental Design. “In Towers, you build a tower out of balsa wood and test its strength by seeing how much sand it can hold,” she said. “It’s a few feet high and, normally, holds 132 pounds of sand in a bucket.”

In Helicopters, students receive materials to build a helicopter, but design it, themselves. They’re judged by the amount of time their craft can fly. At States, Jiang’s helicopter flew 2 minutes, 35 seconds. “It was amazing,” said Coach Williams. “Everybody was in awe, and it got first place.”

Sophomore Emily Sheng did a hydrogeology project about groundwater and wells for Dynamic Planet. She and partner Ebenezer Sampong took a written test about geological concepts and did calculations to explain how the earth’s crust would react to things such as glaciers.

They also received a map with wells marked on it. “A contaminant was leaking into a town’s groundwater, and I calculated how fast the water would travel through the wells,” said Sheng. “We then proposed solutions and determined if it was still safe to drink that water.”

Sheng and Sampong also did Remote Sensing to determine a climate event. And in Invasive Species, Sheng and Mindy Vu identified various ones and described their behavior. Ko, Jiang and Sheng are excited about Nationals for the experience, a break after AP exams and to meet the other teams and make new friends.

Markus Williams and Martin Lee designed and built 3D printed parts for Electric Vehicle and Robot Arm. “We built a small vehicle that had to travel 18-36 feet and be preprogrammed to move on its own after we pushed a button,” explained Williams. His expertise is in designing and fitting things together, and Lee’s is in construction and fine-precision mechanics.

For Robot Arm, Williams and Bilge Batsukh built a robot to pick up 50 pennies and place them individually on an archery target in a certain alignment. Batsukh also programmed the electric vehicle. “I’m ecstatic to go to Nationals,” he said. “I’m looking forward to competing and seeing everyone else’s designs. It’s astonishing what people can make.”

“I think my electric vehicle has a good shot at Nationals,” added Williams. “It has the ability to take first place in the nation.”

Junior Andrew Bengtson will participate in a new, trial event at Nationals, designing, building and flying a small, electric plane. “I’m excited to see the other teams and the incredible devices they’ve created, in action,” he said. One of Fairfax’s top engineers, Bengtson said, “I love watching something work for the first time. When you hit the button and it does what it’s supposed to do, it’s magical.”

However, the school can’t compete unless it can get there; and to do so, it must raise $17,500. “Contributions in any amount would be greatly appreciated,” said coach Williams.

TO DONATE, send checks payable to Fairfax High School, with “Science Olympiad” on the memo line. Send them to the school, attention C. Williams, at 3501 Rebel Run, Fairfax, VA 22030. All donations will be acknowledged with a charitable-contribution letter. Or contribute at the club’s Go Fund Me page: www.gofundme.com/fairfax-science-olympiad-nationals.