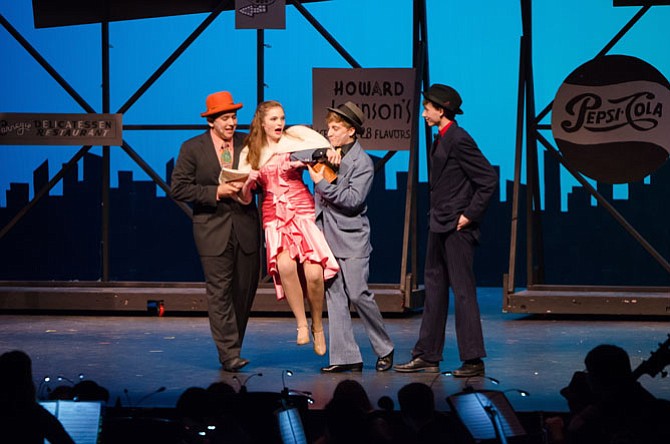 Extra! Extra! Read all about it! Herndon High School's production of New York themed “Guys and Dolls” was a classic taste of metropolitan comedy mixed with smooth songs and charming characters. If you are someone who itches for a glimpse at the controlled chaos of the Big Apple, Herndon High's production is perfect for you.

“Guys and Dolls” is a musical based in New York City during the 1920s. After gambler Nathan Detroit decides that he wants to host a large craps game in order to score a profit, he makes a bet with the rich and charismatic Sky Masterson for $1,000 in order to rent a space for the game. This bet involves Sky taking missionary Sarah Brown to Cuba, and if this guy can get any "doll" he wants, which sets up an entertaining story!

Jordan Rees, playing Nathan Detroit, did an excellent job with the New York accent, and his clever choice of voice inflection really emphasized the show's comedy. Rees employed very good comedic timing and always energized the scenes he was in. Allie Lytle, playing Miss Adelaide, Nathan's girlfriend, also embodied the character in a way which charmed the audience to no end. Lytle did a great job of balancing the character's shrillness with her endearing side, and made the character extremely likable and funny. Her vocals were extremely controlled and she put a lot of her character into her physicality and tone.

Kishan Rao, playing Sky Masterson, was as suave as you would imagine a high profile New York gambler to be. His charming voice was soothing and fit the genre of music extremely well, and he had a good grasp on the character's physicality and tone. Erin Maxwell, playing missionary Sarah Brown, also embodied the character extremely well, and her operatic singing fit her conservative character. She did an amazing job of hitting the notes that were hard to reach, and a scene where she begins to relax was especially entertaining.

The ensemble of the gamblers was very well put together, and their physical comedy added a lot to the show. Even when they did not have lines, every one of them remained in character and made the ensemble seem like a group of guys that had known each other for a long time; it was very genuine. Their dancing, along with the Hot Box Girls, was also extremely impressive.

Although there were some sound issues at the beginning of the show, most of these problems resolved themselves. Herndon High School's production of “Guys and Dolls” is a charming show with a touch of that smooth but hectic New York comedy.