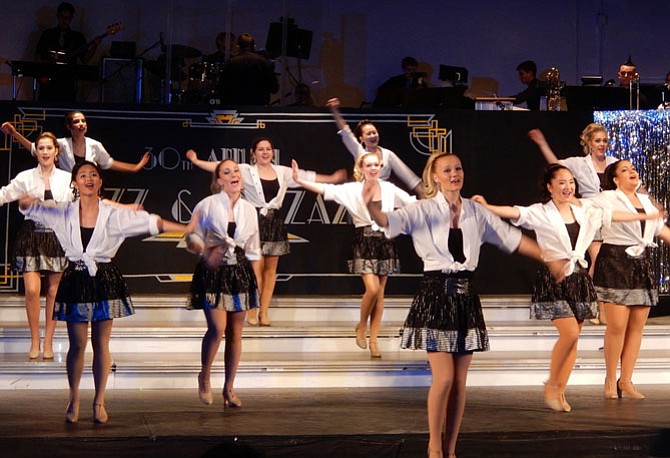 The Chantilly ShowStoppers sing “Man, I Feel Like a Woman,” during last year’s show. Photo by Bonnie Hobbs.

This high-energy, music extravaganza features songs by the Chantilly ShowStoppers and tunes by the Chantilly Jazz. Tickets are $12 at the door or via www.chantillychoral.org. And for the first time, it’s not on Memorial Day weekend.

“We work so hard all year that the kids deserve to get away and spend time with their parents on that weekend,” said Choral Director Evan Ayars. “And with the date change, hopefully more of the audience can attend.”

The ShowStoppers will perform songs from their fall concert and competition set, as well as some new numbers just for this show. “We’re doing some ’90s pop, plus some standards like ‘Besame Mucho,’ which has a Latin Flair,” said Ayars. “But there’s also Michael Jackson, so we’re all over the place.”

The songs include “Sing, Sing, Sing,” a big-band number, plus “Ease on Down the Road” and “Everybody Rejoice,” both from the hit musical, “The Wiz.” There’s also a Beach Boys medley, as well as some numbers sung by all boys or all girls. One of the boys-only songs is “Born to Be Wild,” while the girls-only songs include “I Drove All Night” and “Holding Out for a Hero.”

“All different time periods and genres are represented, so it should be a great show,” said Ayars. “Afterward, people always compliment me on the shows, but I’m not the one performing. So our success really speaks to the talent of the students. I have ideas, but they’re the ones who bring them to fruition. I’m just happy they get this opportunity to perform and shine.”

Calling Jazz & Pizzazz a “great tradition” at Chantilly, he said, “The audience will get to hear a wide variety of music, both sung and performed by the Chantilly Jazz. And they’ll love the positivity and high level of enthusiasm coming from the students.”

Chantilly Jazz Director Chris Riechers said his musicians will play a mix of songs they’ve worked on all year, plus five that are brand new for this show. They started rehearsing at the end of March.

“My goal has been to create as realistic an experience for the kids as I can,” he said. “Because, often, as a professional, you show up to a gig, are handed the music and don’t have a lot of time to rehearse.”

Their program will feature songs such as Duke Ellington’s “Cottontail,” a classic, swing chart; “Hay Burner,” a traditional swing number originally played by Count Basie’s band; an arrangement of “Blackbird” by the Beatles; and “Tank!” the theme song from an anime TV series, “Cowboy Bebop.” They’ll also play “Ran Kan Kan,” a Latin tune similar to a mambo by Tito Puente, and “Street Music,” a funk tune with a jazzy, street beat.”

Soloists will include Cory Carter, tenor sax, in “Cottontail;” Munis Thahir, tenor sax, and Thomas Allain, keyboards, in “Street Music;” Abby Rothschild, flugelhorn, in “Blackbird;” and Jeremy Rechner, alto sax, in “Tank!” And the rhythm section as a whole will be highlighted in “Ran Kan Kan.”

“To say these kids in Chantilly Jazz are eager to learn is an understatement,” said Riechers. “They’re picking up everything and listening to jazz music to further their studies. It’s an incredibly mature group, willing to do anything I ask of them and to try new things; they put themselves out on a limb.”

He said they’re also “genuinely excited for each other and very supportive. When one person is soloing, the others are intently listening and enjoying what they hear. And when performing together, they read what the others are playing and react to it to create fresh, new ideas. They’re truly carrying on musical conversations with each other.”

Basically, said Riechers, “This group has so much fun when they play and enjoys making music together so much that it’s contagious. The audience can’t help but be excited along with them. And since I’m in my first year at Chantilly and know how much work goes into this show, I’m excited to see it all come together.”

The students are looking forward to it, too. Senior Claire Craig, a ShowStoppers soprano, will be in her fourth Jazz & Pizzazz. She’s a huge Beach Boys fan, so the songs she likes best, “Fun, Fun, Fun” and “I Get Around,” are in the Beach Boys medley. “The dance is really fun and it’s our audience-participation number, so I’m excited for that,” she said.

“I really like to perform, and this show combines my two favorite things, singing and dancing; I’m also on the dance team here,” continued Craig. “It’s cool to be part of something where we all share a common interest. But everyone has their own interests, too, so it’s really special. And if not for Jazz & Pizzazz, I might not have met some of these people.”

Senior Jadyn Belmo, a bass, is singing in his second Jazz & Pizzazz. “My best friend was in the choir and she told me how much fun this was,” he said. “And I used to watch them perform and wanted to be up on that stage, too. I like the energy everyone gives; we’re all positive and happy to be in the choir. I love dancing, too, so getting to do both is amazing.”

His favorite number is “Black or White” because “It’s Michael Jackson and is such a change from the rest of the dances we’re doing. It’s hip-hop, and that’s where my dancing started. The audience will love our energy during the show and our different facial expressions for each song. They’ll also like getting on stage with us for the audience-participation number, and we have really great solo numbers, too.”

Classmate Brandon Morris, a tenor, said they’ve been practicing since the beginning of the year, plus twice a week after school to learn the choreography. He especially likes the all-boys, “Glee” mashup of “Bye, Bye, Bye” and “I Want it That Way” by In Sync and the Backstreet Boys, respectively. “It’s so much fun to perform and it comes from a TV show I used to watch,” he said.

This will mark his fourth year in Jazz & Pizzazz, and he’s thrilled to be in it. “Show choir is different from a regular choir because we give emotion to the songs with the choreography,” said Morris. The best part of this event, he said, is “pulling off what we’ve been working on for so long, showing what we’ve accomplished and putting it all together in this show.”