A wordless version of Victor Hugo's masterpiece set in Paris. 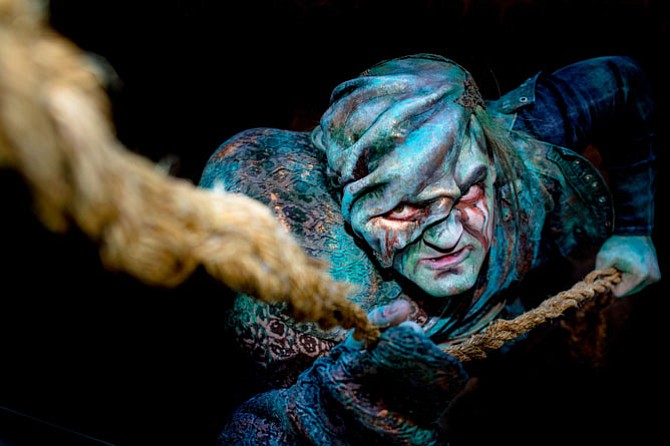 Vato Tsikurishvili plays the deformed Quasimodo in Synetic Theater's production of "The Hunchback of Notre Dame," from May 10 to June 11 in Crystal City. Photo by Johnny Shryock

Synetic Theater is staging "The Hunchback of Notre Dame," from May 10 to June 11 in Crystal City.

Without using any dialogue, Synetic Theater is presenting Victor Hugo's "The Hunchback of Notre Dame" from May 10 to June 11. Synetic’s Founding Artistic Director Paata Tsikurishvili brings his cinematic style to Victor Hugo’s gothic, heartbreaking epic of inner beauty and undying loyalty. When the dancer Esmeralda captures the heart of the deformed bell-ringer Quasimodo, his adoptive father, the priest Frollo, decides he wants her for himself — plunging all of Paris into a spiral of riots, revolution, and murder.

The play is based on Hugo's French Romantic/Gothic novel published in 1831. It refers to Notre Dame Cathedral, where the story takes place in Paris.

Synetic Theater Producer and Director Tsikurishvili said the play has been on their "to-do" list for quite a while. "It's very epic, yet very intimate; very ensemble-based, yet very character-driven," he said. "It's got everything a Synetic show should have, so it's a perfect fit for us."

What he was trying to accomplish, was to show that all kinds of world classics — not just Shakespeare — can be told successfully through pure visuals. "I wanted to expand our visual storytelling vocabulary. That's really what this whole season has been about for us," he said.

He said the themes of the story were a challenge for him as a director. "The themes of this story are very epic, very primal. Lust, loneliness, faith, class warfare — it's a lot tackle, but think we've captured the novel's dramatic essence pretty well," he said. "This story is very much about the 'other,' the outcast, the stranger. Whether it's Quasimodo, Esmeralda, or even Frollo, I want audiences to see that drawing lines around other people — or even around ourselves — can be disastrous, for individual and society at large."

Irina Kavsadze is playing the role of the young Gypsy street dancer, Esmeralda, who she calls the biggest symbol of freedom. "Her freedom is expressed through her dance; it is how she loses herself and gets away from the world," she said. "She cares very deeply for people around her, but at the same time is incredibly strong when it comes to defending herself. She is someone who has had to raise herself and has lived all alone her entire life. She doesn't let people in very easily. She believes in justice above all."

Kavsadze added, "I hope that the audience sees just how corruption destroys everything around us, and shows them just how important understanding and acceptance of others is."

Philip Fletcher is playing the role of Claude Frollo, the Archdeacon of Notre Dame. “Claude, as a father figure, cares deeply for Quasimodo but allows his own reputation and public appearance to overshadow his relationship,” he said. “Claude is also very detached using logical rationalization and studies to distract himself from emotional response and therefore justifying his oft lacking relationship connections.”

He said the challenge in working on this piece was finding a character balance and emotional arc for Claude. “It is easy with a character like Claude to boil the role down to an archetype of evil, corrupt, religious figure, but that disengages the audience from the story. It is harder to find moments of connection where the audience can relate to, possibly sympathize with and/or even in the more extreme care for the character,” he said. “Without this there is no investment or buy-in from the audience and they would not care what happens to Claude, weakening the story.”

Tori Bertocci is playing multiple ensemble characters including the Gargoyle, Gypsy, Soldier, and an Old Woman.

She said, "I hope audiences leave the show discussing with one another the theme of justice vs. injustice, and how this play parallels with today’s current global state."

The show's choreographer is Irina Tsikurishvili, and the assistant directors are Irakli Kavsadze and Tori Bertocci.