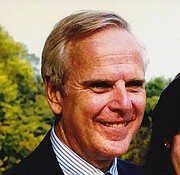 Calvin Louis Thomas, Jr., poet, veteran, State Department officer, husband and father, died June 1, 2016, at home in Arlington, with his wife and seven children by his side. A memorial celebration for Thomas will be held at the Yale Club of New York, at 12:30 p.m., on May 13, 2017. The event will also serve to raise awareness of Frontotemporal Lobar Degeneration, the disease which took away his ability to speak, read, write, walk, and tell stories.

Thomas could tell a good story: here are a few he told. His great grandfather, Dr. Thomas L. Thomas, was killed by federal militia who marched into Missouri in 1864. They met him on his front porch, and asked him if he were loyal. He had treated both northern and southern troops who sought medical care. “Though loyal,” he replied, “I cannot deny I am a Southern man.” He was taken to a ditch and shot. His wife and children wrapped him in a quilt and brought him into the house; Thomas kept the bloodied quilt he died on. When Thomas arrived at Yale on a scholarship, the man sitting next to him in his Freshman class was the great-grandson of one of the federal militia soldiers who entered the town.

A published poet, Thomas was interviewed by the Indian writer, Dom Moraes, while in Bombay, who noted that he was a good example of what Coleridge had written: anyone once visited by the Muse is forever after haunted by her. Thomas told Moraes that when he retired in 1988, he wondered if he should have traded poetry for service to his country and financial security. Thomas told Moraes, back in the 1950s, people had the idea of wanting to serve their country.

Thomas told the story of arriving in wartime Saigon on his way to the consulate in Can Thô. The ambassador, Ellsworth Bunker, said: you will like the Mekong Delta and there is much down there which will remind you of World War I. Thomas recounted he could not imagine what Bunker meant but assumed water in the trenches might be like water in the paddy fields. All he knew was that World War I was a hopeless stagnated conflict with prideful leaders, bestiality and ignorance leading to no good end. When he had to go back to Saigon to present his monthly report to the Ambassador, Bunker looked at his report, and then at him, and again asked, do you see now the resemblances to World War I? Yes, he did.

On arrival in Colombo, Sri Lanka, where he accompanied his wife and two toddlers, he called in the gardener, a callow young man named Priyantha, and asked him to check the garden for snakes before allowing the children to play in it. Priyantha resisted, saying he had already raked the garden; after obliging Thomas, he was bitten by a poisonous snake and rushed to the hospital for an antidote. This story was replayed in other countries, with other dangers - mushrooms, rabid dogs; it was a good thing he was there, keeping things under control.

For his 25th wedding anniversary Thomas suggested to his wife that a big surprise was in store, a very beautiful one which symbolized love and devotion. She had to guess what it was: hint: it’s emerald green. Hmm, she thought, maybe it is an emerald? He led her out into the garden, where two burlap coffee sacks, tied at the top with a drawstring, appeared to be moving. As he pulled one string, out came a beautiful male peacock, and he strolled into the garden as though he owned it. In the second bag was a pea hen, and she joined him. “Peacocks mate for life,” he said.

Thomas wrote in his Yale 50th reunion book, referring to Cicero’s “On Old Age”: “So, which of us can say he has seized cities or else lived a thoroughly peaceful, gentle, not to say graceful life? Nearly no one, as Cicero knew, but reading him further we learn one must settle for a place in the present, whatever the path to it. Cicero’s thought isn’t about the way to where one is but about the way from there.” Thomas happily noted that his present was better for having his children in it, and for his friends, and he looked forward to the open path, whatever it brought in his 70s and 80s.

What the next decade held for Thomas was indeed a surprise: he adopted his youngest son in Morocco, and brought him up with classical music, art, horses, model airplanes, John Wayne movies and, of course, stories. Thomas was full of surprises and adventure, upbeat when everyone else was not. He was a constant source of optimism: you will get into Yale, you will carry off that speech, you will have that healthy baby. His raised fist as his children went off to face whatever demon lay before them, his utter confidence in them was neither superficial nor lightly conveyed. If they lost or broke something for which he had paid dearly, he went right out and bought another. These qualities of kindness and affection made it easier to overlook his changing personality and forgive his quirks as FTLD entered his life. Undiagnosed (correctly) until he donated his brain to Georgetown University when he died, Thomas was fully aware of his disease, watched his decline as he walked, talked, wrote, and read less, kept his sense of humor, and likened FTLD to drowning very slowly right next to land. He might have had a premonition of the disease that eventually deprived him of his ability to find any words at all, when he quoted in that class book:

“So happy be the course of your long life,

So run the years into his circle rife,

That nothing hinder your well meaning mind:

Perfect intelligence, all help at hand;

Donations in Cal’s name to AFTD will help fund research for a cure for FTD and support to those who have it. See: https://www.theaftd.org/get-involved/ways-to-give/electronically