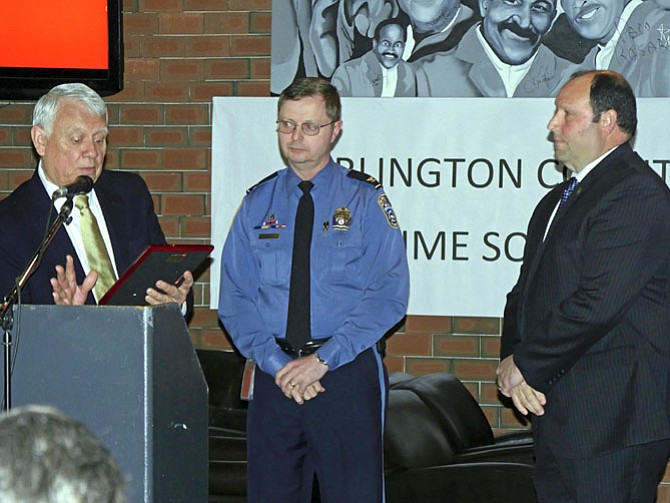 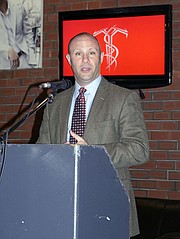 Noah Simon, U.S. Rep. Don Beyer's district director, who was standing in for the congressman, pointed out that Beyer was on the House floor at that moment “voting no on the health care bill." Simon added that Beyer did a police ride-along and got to see the local police working with the community and building trust.

Several awards were given at the Arlington County Crime Solvers (ACCS) luncheon on May 4 including ACCS Law Enforcement Officer of the Year presented by Arlington County Police Chief Jay Farr to Detective Kevin White.

White has been on the police force for 26 years, 19 in the fraud division focusing on crimes against senior citizens. He was instrumental in tracking down and getting an arrest in a fraud case last year involving a contractor working with an 82- and 77-year old couple. "It got solved from a single fingerprint."

The ACCS Citizen Award recipient was Richard V. Doud, Jr. who founded ACCS in 2000, and the ACCS Law Enforcement Community Award was presented to the Arlington Chamber of Commerce.

Andres Tobar, ACCS president, noted that the organization funds two tip lines. "The most vulnerable are often the most fearful so there needs to be a vehicle where people can leave a tip," he said. A tip line can eliminate hours of background checks and investigation by police. Tobar said the community and police need to work together and quoted former state delegate and County Board member Al Eisenberg, who said if there is a problem it is best for you to commit to that problem and embrace it together. "So it's not them against us."