Soccer Club, County Team Up to Renovate Field in Great Falls This Summer 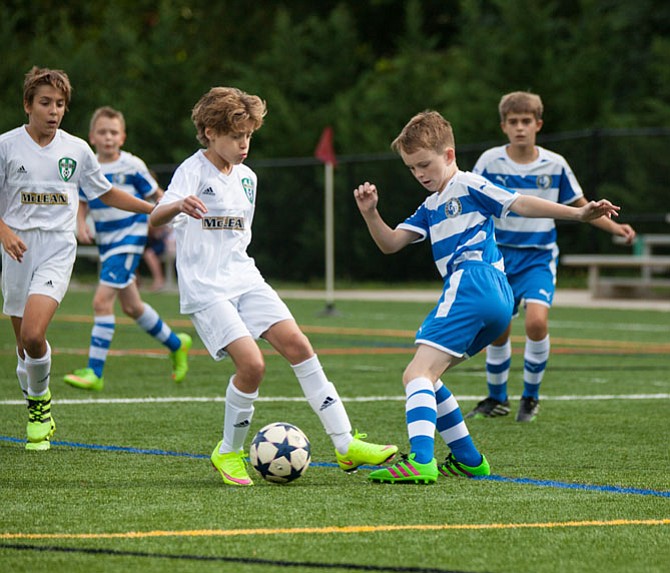 Liam Coulon (right) tries to steal the ball from an opponent from McLean. Photo courtesy of the Great Falls Soccer Club 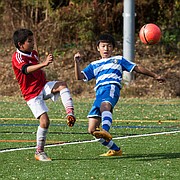 Andrew Ji (right) tries to outsmart his opponent in a challenge for the ball. 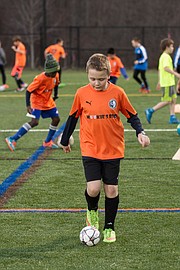 Alex Martin shows off his ball-handling skills during team practice.

Construction will begin on the rectangle field No. 7 in the park in late June and is expected to be complete in early September in time for the club’s fall season.

The Fairfax County Park Authority Board approved a $20,000 grant for the soccer club during its meeting on Wednesday, April 26. The grant funds will be used to help convert the Bermuda grass of the field to synthetic turf as well as adding lighting.

This is only a small portion of the $1.25 million project.

This grant will be combined with an $855,000 contribution from the soccer club itself and $125,000 from the Neighborhood and Community Services Synthetic Turf Development Mini-Grant Program, and $250,000 from the 2012 Park Bond.

“We realized that it was a great field to play on, but the problem was the cost to maintain the field,” said Ashi Chaturvedula, who manages the finances for the soccer club.

Chaturvedula quickly discovered where a great portion of the club’s money was being spent when he took his position: field maintenance.

GFSC has been a participant in the county’s Adopt-A-Field program for several years and has contributed funds toward maintenance and improvements for fields at Great Falls Nike Park, as well as many other park and school athletic fields.

The GFSC was paying $80,000 a year in fees to maintain the grass fields it used and the fields often became unusable, according to Chaturvedula.

“In the spring, it was rained out for most of the games so we were paying something that we couldn’t use at all,” he said.

That’s when he and other members of the club approached the county to talk about changing the field to a synthetic turf. This was two years ago.

“It takes a lot of time because you have to shepherd every aspect of this process through,” Chaturvedula said.

For the club’s financial contribution, it is putting about 10 percent down, taking on a loan and will be fundraising to raise the rest of the money, according to Chaturvedula.

Since the field will be closed during the entire summer season, the club will have to double up on using other fields. But club members think their efforts will be worthwhile.

“The county fields are already in high demand from soccer clubs,” he said.

In addition to reducing maintenance costs, the club hopes the turf and lighting will allow the field to be available more often for its 1,200 players.

The $20,000 grant from the park authority is from its Mastenbrook Volunteer Matching Fund Grant Program. The program comprises bond-funded grants that provide matching funds for projects in Fairfax County parks.

In 1998, John Mastenbrook, a 21-year veteran of the Fairfax County Park Authority Board, suggested a grant program be established to encourage public and private ventures that would improve parks and park facilities. The program fills a gap between limited bond funding and the community's desire for new neighborhood park facilities.

Since 1999, there have been more than 150 Mastenbrook Grant projects with awards of approximately $1.3 million. The grants have gone toward projects in Fairfax County valued at more than $9.2 million.