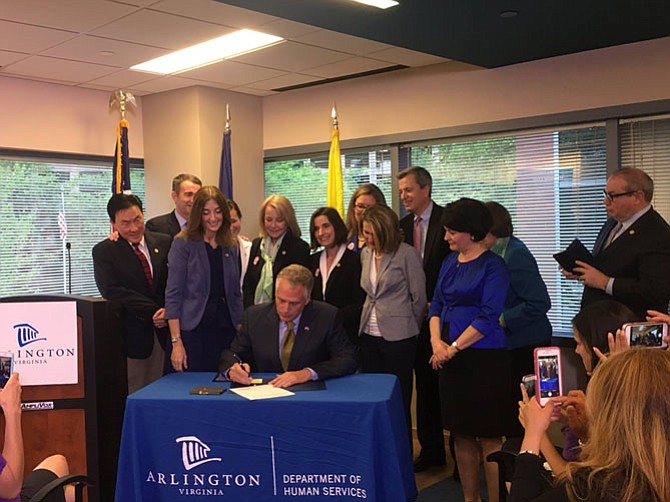 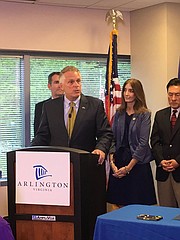 On Monday, April 26, Gov. Terry McAuliffe signed Del. Eileen Filler-Corn’s (D-41) bill, HB 2267 at the Stambaugh Human Services Center in Arlington. HB 2267 will require health insurance plans that cover contraceptives to allow women to pick up a year’s supply of birth control pills at one time. According to supporters in attendance, the law is considered to be the first proactive reproductive health legislation passed in the Virginia General Assembly in more than a decade.

“Access to safe, reliable birth control will benefit many throughout the Commonwealth,” said Del. Filler-Corn. “My bill will empower women to better plan their lives, careers and families. I am proud that this commonsense measure passed with broad bipartisan support. This is a major victory for Virginia women.”

A study by the University of California’s Bixby Center for Global Reproductive Health found that a 12-month supply of birth control decreases unplanned pregnancies by 30 percent, compared to a supply of one or three months. “It’s much cheaper to supply a woman with a year’s worth of birth control than cover an unexpected childbirth,” said Tarina Keene, executive director for NARAL Pro-Choice Virginia.

In addition to the Governor, Filler-Corn was joined by Lt. Governor Ralph Northam, and many members of the Virginia General Assembly as well as advocates and activists who filled the room to capacity. Many others stood outside the glass walls of the clinic’s conference room where the signing took place.

A bipartisan effort with both Democratic and Republican co-patrons, HB 2267 passed by vote of 94-1 out of the House of Delegates and vote of 34-6 out of the Senate during the 2017 General Assembly Session. In addition to joining five other states and the District of Columbia, Virginia will become the first state in the south to offer women the option to obtain a 12-month supply of birth control pills at one time.