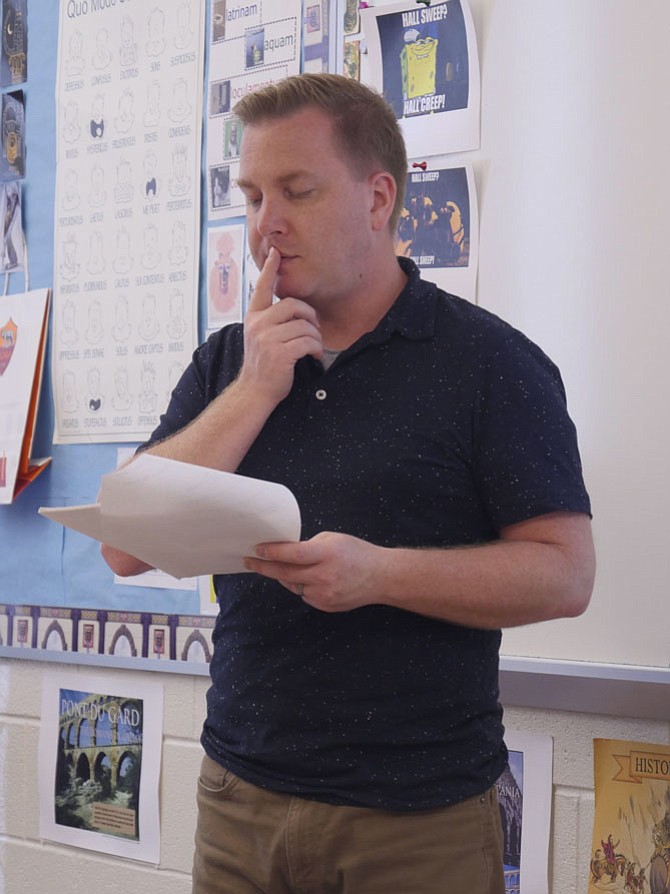 Justin Redpath, Latin teacher at T.C. Williams High School, “gets down in the dirt” with his class on analyzing Roman poems — what is the author trying to say and how does it translate into our lives today. Photo by Shirley Ruhe.

Justin Redpath shows his recently acquired Latin tattoo. It means “trust in the future as little as possible.” 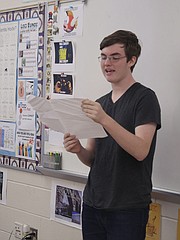 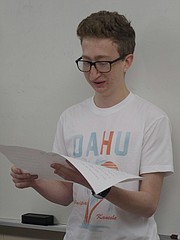 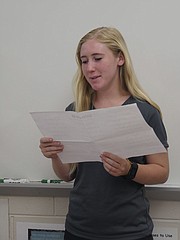 A loud bell reverberates down the hallway. Today three AP Latin students in Justin Redpath's morning class will be performing the poem "Carmen 45."

"Performing?" one of them questions.

“Yes, say it with emotion," Redpath instructs. Alexander Schlegel begins. "Acmen Septimius sous amores." Redpath explains that Catullus was an unusual poet in Augustan Rome because he wrote from the heart instead of the traditional epics and records of battle. He ushered in a new era. "It was new wave Latin."

Redpath explains he likes to get down in the dirt and analyze poems. He points to the line on the whiteboard behind him: "Num te leaena monibus Libystinis." He says, "You all know what num is, a negative question. I ask the students what is he [the author] trying to say." Redpath says today's poem is about Acme, a Greek woman, and Septimius, a Roman man. It is a 24-line love poem. Schlegel hands it over to Grant Raycroft for the next eight lines, and he passes it on to Hannah Martin for the conclusion. This class combines three AP students with 10 Level 4 Latin students.

Redpath says he likes to make comparisons between Romans and modern America. For instance, the tradition of a groom carrying the bride over the threshold dates back to Roman times. He explains that it symbolized going from one chapter to a new chapter, and it was a very bad sign if you stumbled. "So the groom carried his bride over so she wouldn't slip." He continues, "look what happened with the Trojan horse. They had to take down a wall to get it in and then stumbled three times trying to get it over the threshold. And," he adds, "that was seriously a bad omen for them."

A map of ancient Rome is displayed on the wall in the front of the room along with a sign behind his desk that says, "A language isn't foreign once you learn it." He explains Latin is the root of five romance languages. Redpath says a lot of students come to him from Spanish and French, and they say the Latin words sound like the ones they learned in another language.

Yesterday Redpath says they discussed life in a patriarchal society and how it affects the way men treat women. In ancient days it was expected that men would work and make the money and engage in politics while women would stay at home, raise and educate the children and control the finances. He says while there used to be many comparisons with modern day society, around here we have moved away from that.

Redpath reaches out his arm. "I got this tattoo last August; I'd been thinking about it for a long time." "Credula Postero" on the top. Quam Minimum" on the bottom. "Trust the future as little as possible." He explains, "It is from Horace who we read last year. This is how I feel in my personal life. Live in the moment. A lot of people obsess about what is coming, always thinking about college." But he says there should be a balance.

"I am now in year 8 at T.C. Williams." Before this he taught for three years at George Washington Middle School. "I became a Latin teacher because I had a really inspiring teacher at Pioneer High School in Ann Arbor." He says he was always interested in ancient cultures like Egypt and this seemed close. "It hooked me in and just never let me go."