First day of the house regular season is now in the books with a win. 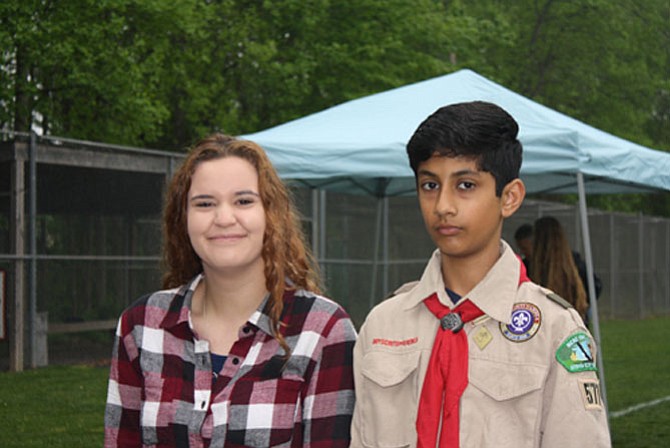 Yasmine Akl of Westfields High School sang the National Anthem, and Jaidey Mehta led the fans in the Pledge of Allegiance. Photo by Donna Preski

Southwest Youth Association Nationals, Orioles, and Red Sox Line-Up for Opening Day, April 22. The Red Sox won their home opener while other games were postponed due to rain.

On what would have been an otherwise dismal day because of the rain, Southwest Youth Association Babe Ruth held its Opening Day on Saturday, April 22 at the LLV baseball diamond. Volunteers and players attended Opening Day ceremonies to the fanfare of the National Anthem, salutes to the American flag, and Krispy Kreme donut fundraising as part of the festivities.

As a stage setter for All Star play later this year, the House League teams began season play with the Red Sox outscoring the Northern Fairfax Babe Ruth Nationals opponent. This year’ SYA Babe Ruth Opening Day begins another quest for teams eventually competing in All Star play. Prior years have seen three different SYA Babe Ruth age group teams winning post-season tournaments to qualify and win Virginia State Championships by one of the many All Star teams the league forms. Prior State Championships include: 13-15 year olds in 2016, 14 year olds in 2017, and 16-18 in 2017. In 2015, the 16-18 team also advanced to the Babe Ruth World Series in Oregon, placing third overall.