Sounding Off about Higher Monopole in Cabin John Park
Votes

Sounding Off about Higher Monopole in Cabin John Park 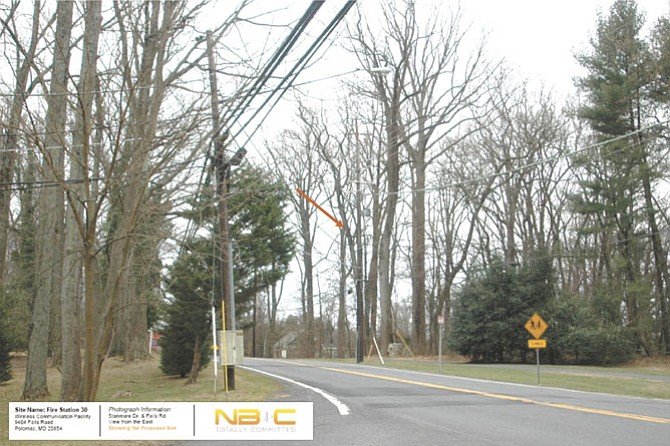 Only seven residents attended the public meeting to hear the county’s proposal on increasing the height of the monopole at Cabin John Park Fire Station - Station 30 – on Falls Road at Potomac Elementary School on Tuesday, April 25, but the meeting still proved contentious.

C.O. North, who lives next to the fire station, objected to the new monopole, which will go from the current height of 90 feet to 185 feet. His argument was based on the history of the fire station and the parameters set when it was opened.

“The monopole takes away from the promises of the [1970s] to have Station 30 blend in with the neighborhood,” North said. “The community doesn’t want a 185-foot tower in its neighborhood.”

Gerry Adcock, manager of Radio Communications Services for the Montgomery County Department of Technology Services, explained the purpose of the higher monopole is to increase communications coverage for county fire and police. It is planned as part of a 22 antenna system throughout the county.

“We already have 11 and are adding 11 more in order to fill our communication needs,” Adcock said.

He assured the attendees that the monopole would only be used for official communications, not for commercial purposes.

Still, residents were not convinced, asking if the county had considered other sites for the higher monopole. North suggested the Brickyard property, a nearby site owned by the county to be used as a future school site. Others suggested placing the monopole on park land closer to the Potomac River, as that is one of the areas that will most benefit from improved communications. Another suggestion was farther down River Road at the WSSC Water Treatment Plant.

Adcock assured the group that other sites were considered but each had a reason that made it incompatible or unusable.

The discussion hit a standstill when North asked about the approval process the county used to approve the new monopole.

Adcock said he did not know.

“I’m not clear on the whole process,” he said. “I run a technical group. I have a whole radio system to run and a project to run.”

None of the other county officials at the meeting knew either.

Zac Trupp, legislative assistant to County Council President Roger Berliner, was at the meeting and he said he did not know what the process is either.

“We are currently looking into [that],” he said on the phone later in the week. “I asked the project board to give me a timeline of when constituents would have input.”

Another question was that of a fall line. Monopoles are supposed to be designed so that if they fall, they do not fall off the property on which they stand, Adcock said.

He does not consider that a problem with the Station 30 monopole.

“We have never had an antenna fall,” he said. “We designed this … so it could support half again its weight.”

North summed up the meeting from his point of view with, “Nobody is objecting to better communications, we just don’t want it [at Station 30].”

Adcock said he understands the objections but his mandate is to make fire and police communications coverage better.

“This is one of those necessary evils,’ he said. “It’s necessary for public safety.”