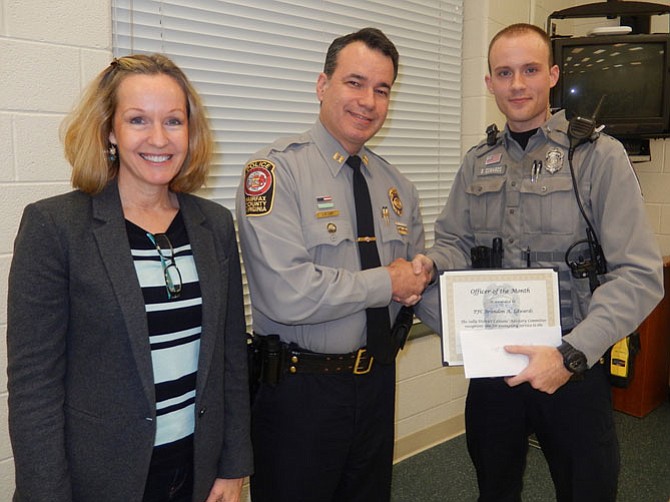 PFC Brandon A. Edwards has been selected as an Officer of the Month for the Sully District Police Station. He was honored at a recent meeting of the station’s Citizens Advisory Committee.

He transferred to this station from the Mount Vernon District Station in July 2016 and became a part of the Evenings A squad. His supervisor, Sgt. Brad Metz, nominated him for Officer of the Month.

“PFC Edwards certainly doesn’t let the grass grow under his feet, as he averages writing a book of summonses a shift,” wrote Metz. “And he’s able to maintain this level of productivity all while still handling calls for service in his patrol area.”

In January alone, Edwards conducted more than 300 traffic stops. “Because of the large volume of traffic summonses he generates, he’s part of a very small group of officers on the department who are assigned three traffic dates a month,” wrote Metz. “This is a staggering number if you consider he only works 14 days a month. If you see a cruiser along Route 28, there’s a high probability that it’s him.”

Describing Edwards as an extremely hard worker, Metz said, “His professionalism both shows and is contagious to the other officers. He routinely is the first officer to go in service after roll call and one of the last units to come to the station at the end of the shift. Out of the thousands of citizen contacts he encounters yearly, he does not generate any formal complaints, which is truly unique.”

Metz also noted a routine traffic stop made by Edwards in January that proved to be anything but routine. “The vehicle’s license plates turned out to be stolen from Warrenton,” wrote Metz. “While doing his investigation, Edwards contacted the detective from Warrenton and learned the subject was involved in a larceny ring that was being investigated where the suspects were unknown. Because of the traffic stop, Edwards was able to provide the detective with pertinent information regarding the persons in the vehicle.”

All in all, added Metz, “PFC Edwards is a dedicated employee and is very deserving of the recognition as Officer of the Month.”