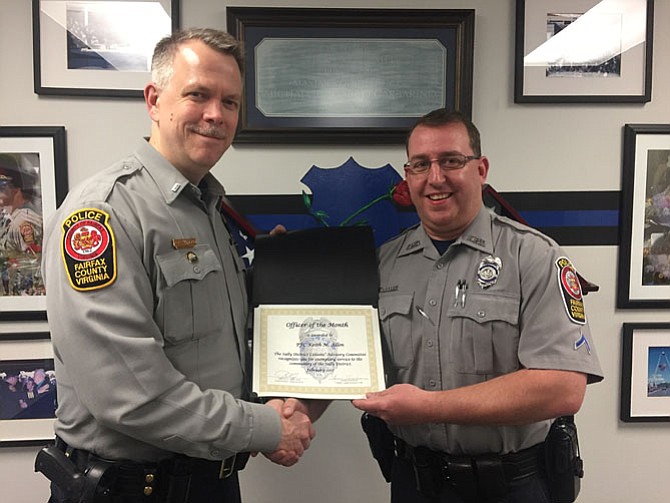 PFC Keith Allen has been chosen as an Officer of the Month for the Sully District Police Station. He was recognized recently during a meeting of the station’s Citizens Advisory Committee.

In his writeup nominating him for the award, his supervisor, Lt. Tim Burgess, said Allen continues to display “the same level of professionalism and dedication [he’s had] since first being assigned to the Sully District Station. He has a sincere desire to do the best job he can and provide the best service possible to the citizens we serve.”

Burgess said Allen often volunteers for cases that require extra time and effort, and he has “displayed a high level of conscientiousness to ensure quality service. He never complains about his work load and, in fact, seeks out extra assignments — even at the end of his shift — to help reduce the workload of others and be a team player.”

As a Crisis Intervention Team-trained officer, Allen handles and assists with cases involving emotionally disturbed people whenever the need arises. Burgess said he’s also “diligent” about completing his required paperwork, staying as late as necessary, until he finishes his portion of the cases for which he’s often volunteered.

“Allen is a street-smart cop and will always take on extra work to help out his squad mates,” wrote Burgess. “He has been credited with closing the gap on numerous cases, in recent months. For example, he resolved two domestic-violence cases where the initial contacts were made with the police department.”

Furthermore, continued Burgess, “Allen took ownership of these cases when they might have otherwise fallen through the cracks due to victim reluctance. These victims needed an extra hand and encouragement in order to follow through with proper reporting, and that is exactly what he provided. He took ownership of these cases and was able to provide fantastic victim assistance and closure.”

Burgess also noted that, recently, Allen resolved an incident involving a local school that had a lost child and was able to reunite that child with adult supervision. “He has also remained highly proactive, creating citizen contacts and thereby successfully removing illegal drugs from the community,” added Burgess. “Allen, like every other officer, is assigned a patrol area daily. But he handles anything that comes his way, regardless of where the case originates.”

“His supervisors have peace of mind knowing that he will properly investigate and document all aspects of his daily encounters,” continued Burgess. “He is extremely reliable and trustworthy and he possesses an impeccable work ethic combined with a great personality — with which he can instantly lower anyone’s stress by providing a joke or soliciting a laugh.

“It is a pleasure to have PFC Allen serving in the Sully District. He is a valued individual who reflects the quality and integrity we rely on in order to maintain strong relationships within the community. He is respected by his peers, highly dedicated and is well-deserving of recognition, as Officer of the Month.”