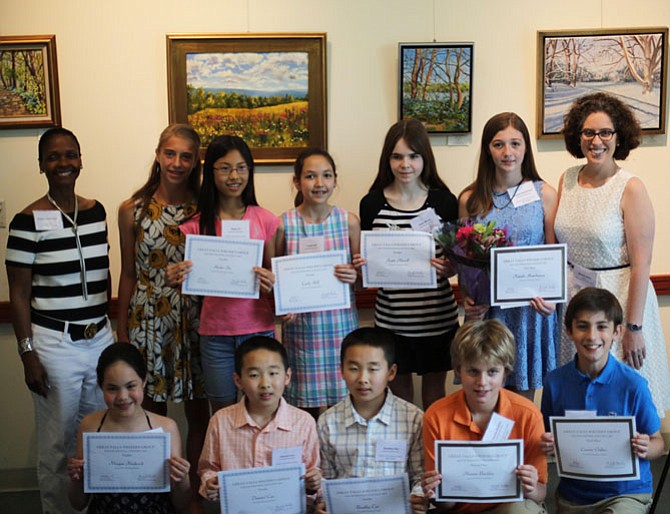 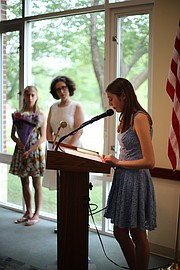 First-place winner Natalie Hutchinson read her poem about a fox and his neighbors. The Great Falls Writer's Group's 2017 Youth Writing Gala featured winners reading their works produced during a timed writing prompt. “I never thought about sharing my writing with others outside my close friends and family. I was nervous about reading my poem out loud, but when I heard the applause I felt like I could do it again," said Hutchinson.

Natalie Hutchinson reads her winning work, "A Bear and a Fox and Their Friends in a Box."

A Bear and a Fox and Their Friends in a Box

Once upon a time, when animals talked,

They also wore clothes and on two legs they walked.

An apartment complex that was made from a box,

Held curious creatures like a bunny and a fox.

The biggest box was the home of a bear,

He dressed in a suit and tie and liked his salmon rare.

His neighbor was a dapper little deer,

She drove a Cadillac and wore pearls on each ear.

Her neighbor was a fancy little fox,

She drank Earl Grey tea and wore barrettes in her locks.

Her neighbor was a curious little bunny,

He had a little bow tie and a voice as smooth as honey.

His neighbor was an alley cat,

He played the flute and sported a fedora hat.

His neighbor was a tiny little mouse,

She knitted cozy blankets and lived in the smallest house.

This was a time that humans won’t remember,

These animals drank coffee and they wore suspenders.

They opened little shops and went to the store,

They dusted the cabinets and vacuumed the floor.

There is nothing stranger than the good old days,

When animals acted like humans and adopted their ways.

Three sixth-graders received their first “paychecks” for their writing Saturday.

Natalie Hutchinson won first place for her story poem about a fox and his neighbors. Thomas Buckley earned second place for his “Modern Art Rant” about making sculpture from trash. Connor Oakes received third place for his story “Special Delivery” about someone who was finally given an opportunity to work.

The 50 sixth-graders who participated in the contest represented Great Falls Elementary School, Colvin Run Elementary and Forestville Elementary; several homeschoolers participated as well. Each examined a visual prompt — cardboard boxes of various sizes nested casually inside each other — and wrote whatever the boxes inspired them to write. Grammar, punctuation, and spelling counted.

“I looked from many angles and thought about what the boxes could be instead of what they are,” said Katie Merrill, who thought spilled boxes looked like a dragon's head. “I adapted the prompt so that the dragon’s body was made of cardboard boxes.”

“Each of you has written something uniquely from you,” said guest speaker Sophie Tedesco, a published author who at age 15 is working on a second novel. “Write, and write often — 90 percent of being a good writer is showing up to write.” She encouraged other young writers to finish works they start.

“This was the best tailor-made event for Carly,” said Jon Hill about his daughter’s participation. “She’s constantly writing. She has writing apps on her phone because she’s working on a book.” “Secret of the Depths” is Carly Hill’s work in progress about a girl named Kiera whose father is a fisherman.

“The library is a community hub. This event is the perfect example of what libraries can be,” said Dixon. “It’s the result of many community connections coming together.”

GFWG hosts the contest and the Friends of the Great Falls Library finances the awards gala. “I have the tough job — handing out prizes and money,” said Michelle Miller, FGFL president said to participants. “We’re paying you for your first work!”

To the volunteers who spent months planning and judging the entries, mother Pisey Frederick is thankful because the contest is a confidence builder. “You made Morgan realize her potential — that she is a strong writer.”

“The contest encouraged me to keep writing,” said Connor Oakes about the contest. “And I’m not alone. Those who also participated share the same passion.”