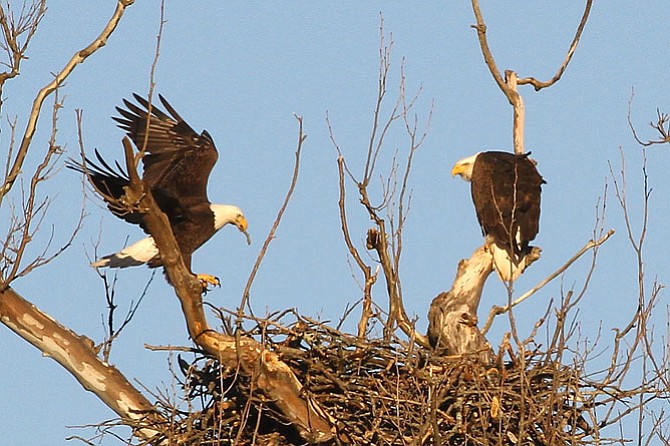 Female adult eagle (on left ) and young hatchling eagle (on right) in Riverbend nest on April 27, 2017. 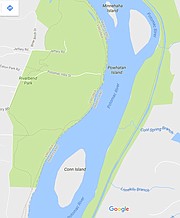 Bald Eagles, although surely not the same two birds, had been nesting on Conn Island, for at least 20 years or more. The original nest was in a large sycamore tree on the northern or Maryland side of Conn Island. Bald Eagles tend to use the same nest year after year, adding more sticks and branches each year until the nest can become quite large: as much as 8-feet in diameter, up to 10-12-feet deep, and weighing well over 1,000 pounds.

Then, in about 2008, one of the supporting limbs of the original nest tree broke, and the nest collapsed to the ground and into the Potomac. Obligingly, the eagles soon built another nest, but this time on the southern end of Conn Island where it was easily viewable from both sides of the river. The eagles successfully raised and fledged one-to-three chicks from this nest each year for four years, until that nest was destroyed in the great Derecho windstorm on June 29, 2012.

Very soon after, the eagles built yet another nest in a large tree, also at the south end of Conn Island. That nest, which fledged three young eagles in 2014, was also blown down by a strong wind storm in the late spring 2014.

Then, in early November 2014, the eagles were seen constructing a new nest higher up in the same tree from which the former nest had been blown down. In June, 2015, the adult pair fledged two-or-three young eagles from this nest, although by the time the last eaglet had left, the nest had mostly fallen apart. The adults were later seen adding sticks to repair this old nest, but they apparently did not nest successfully in 2016.

Then in the summer and fall of 2016, a pair of adult Bald Eagles, apparently the same two birds that had formerly nested on Conn Island, were observed building a new nest in a large Sycamore tree on Minnehaha Island in the Potomac River, just upriver from the visitor center at Fairfax County’s Riverbend Park. The eagles had been seen perching on this tree for much of the winter and spring of 2016, before they began building the nest.

BALD EAGLES, in the mid-Atlantic/Chesapeake region usually mate and lay eggs in mid-February. They incubate the eggs for about a month (34 to 36 days) and then it takes about 10 to 12 weeks before the young, juvenile eagles are ready to fledge and leave the nest. In late December and in January, or especially early February, adult Bald Eagles can sometimes be seeing mating/copulating on a branch or snag near a nest.

Thus it was apparent that the Riverbend eagles intended to use their new nest for the upcoming breeding season as they were observed and photographed mating/copulating on the limb beside the nest on Dec. 30, 2016, and on later occasions. In early February, the female adult eagle was apparently incubating eggs. By mid-March, the female appeared to be feeding and tending to new hatchlings.

Because an eagle nest is so large and deep and high, and the newly hatched chicks are so small, it is nearly impossible to determine exactly when hatching occurs, by observation from the ground. However, by the third week of April, the head of an eagle chick could be seen above the edge of the Riverbend nest. There were earlier reports were of two possible chicks in the nest, although only one young bird now appears to be on the nest.

The young eagle chick is constantly fed by its parents and is growing very fast. It is already flexing and flapping its wings to build strength. By June, the young juvenile eagle will be nearly fully grown and will probably be seen walking and bounding around in the nest, and energetically flapping its wings, although at this point it will still be fed by its parents. By mid-to-late-June it should be fledged and have left the nest. Young Bald Eagles are almost entirely brown when they first leave the nest; by the end of the first and during second year they begin to get some transient white on the body or under the wings. Late in their third year, and during their fourth year they become sexually mature and get the white heads and tails that are so characteristic and charismatic of our National Bird.

THE NEW NEST on Minnehaha Island is an excellent opportunity to see and watch a young eagle grow and develop and finally leave its nest. If you want to see the nest and the chick, go to Riverbend Park (www.fairfaxcounty.gov/parks/riverbend-park/), walk upriver on the river trail for about a third of a mile, and look for the large nest in the tree on the island in the middle of the river. If one looks to the right, across the river, just at the point where the park trail from the Nature Center comes in from the left, the nest is right there. One may well see the chick and an adult on the nest, or even see an adult bring in a fish for dinner. A pair of binoculars, a spotting scope, or a camera with a telephoto lens will provide an even better view of the nest and its occupants. Go see for yourself. It’s well worth the trip.

Donald Sweig is a local birder, naturalist, and photographer, who is an occasional contributor to the Connection.