George and Connie Stewart and their children Julie, Joy, Jenny and George support access to dental care for those in need. 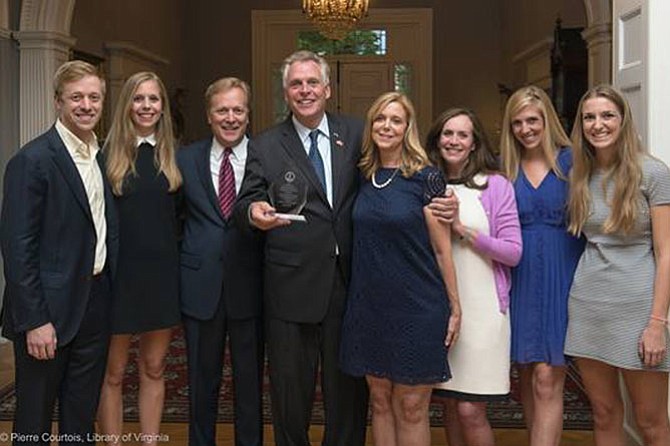 George Stewart of McLean walked into a waiting room and saw a woman sitting in one of the chairs. Her smile would inspire his entire family to take action.

“She looked up and smiled at him and he saw that she was a wonderful woman but that she was missing some teeth,” said his daughter, Julie Stewart Yang. “He thought, if she went into a job interview or anywhere else, she would be seen and viewed differently if she had the right type of dental care.”

That was more than two years ago.

Since then, George and Connie Stewart and their children Julie, Joy, Jenny and George have volunteered their time, contributed their funds, shared their expertise and provided immeasurable in-kind support through their family business to support access to dental care for those in need.

The family and their commercial real estate business accomplished this by supporting the Arlington Free Clinic located on the ground floor of the Halstead Building at the intersection of Columbia Pike and Walter Reed.

With the family’s help, the clinic started its dental program in 2015 and has served more than 450 people with more than 1,500 appointments.

“The majority of our patients haven't had access to regular preventive dental care, and many have never seen a dentist, so most require multiple appointments to get to a healthy mouth,” Alicia Nieves, a spokesperson for the clinic, said in an email.

George Stewart was one of the first to donate money to the dental program.

“He visited the clinic a few years ago when we were dreaming about starting this program and got involved as a donor, but even more than that, as a true champion of the program,” said Nieves.

Last year, the family threw a “Bites and Blues” party to raise funds to expand the program’s operating hours. The party brought more than 200 new donors to raise more than $100,000 for the program, according to Nieves.

“Everyone from our company contributed in some way,” said Julie. “We just really felt called to show God’s love to the community and to serve people.”

In addition to supporting the dental program, the family also operates Doorstep Ministries, a nonprofit with the mission to financially help people in the Washington Metropolitan Area with one-time monetary assistance for emergency expenses.

The family’s volunteer work garnered attention from Richmond a couple weeks ago.

Virginia Gov. Terry McAuliffe recognized the family during the 2017 Governor’s Volunteerism and Community Service Awards with a special ceremony at the Executive Mansion on Thursday, April 20.

“We should all strive to follow the examples set by these individuals, organizations and companies and give back to our own communities, which helps to make Virginia such an extraordinary place to live and work,” McAuliffe said in a press release.

“It really was a team effort, so not just our immediate family but also our work family and church family,” said Julie. “Everyone came together for this.”