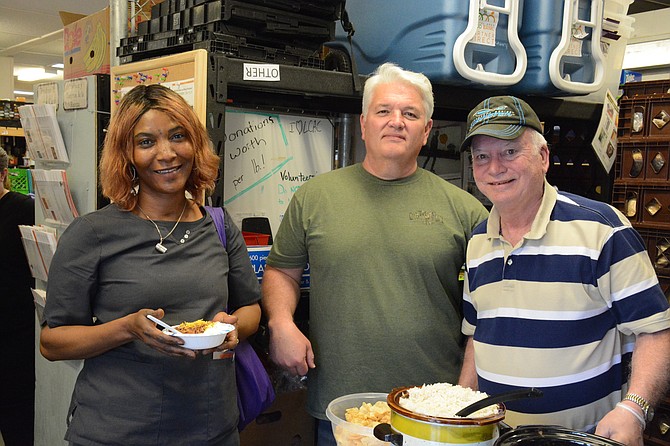 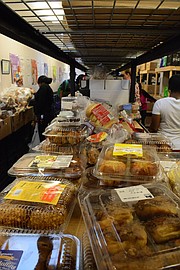 Guests shop for food at the Lorton Community Action Center pantry on March 28.

Bob Flanagan of Fairfax Station and Tom Dalton of Springfield serve up samples of two styles of chili, just like a vendor at a grocery store. Except their chili — each man is responsible for one pot, either sweet and spicy or mild and chunky — is made with local venison. And the grocery store is actually the Lorton Community Action Center food pantry.

The men are members of Suburban Whitetail Management of Northern Virginia, an organization of bowhunters who provide a free service of controlling deer population on private property and suburban development. Flanagan estimates they harvest about 600 deer annually from around Fairfax County. He calls that “a small dent” in the county’s exploding population.

From that harvest, the hunters have the deer processed and distribute excess venison among friends, the Hunters for the Hungry organization and LCAC.

Several times per month, SWM drops of between 60 and 80 pounds of ground venison, frozen and vacuum-packed for guests to make into hamburgers, pasta sauce, tacos or, of course, chili.

“To be able to donate the deer in one way or another is fulfilling,” Flanagan said at the chili-tasting on March 28. This is the second year the two men have done such an event at LCAC.

Dalton added that it means a lot they’re able to help people locally with their hunting, as well as chipping away at the overabundance of deer in the area.

The men said the mild winter made for a good hunting season, though the flip side they’re seeing a significant increase in the fawn ratio already this spring. Based on that, they expect about a 20 percent increase in deer this year over 2016.

“We need more private landowners and agencies to buy into the idea of management,” Flanagan said. Fairfax County manages its own lands, including allowing hunters on to parks at specific times.

“Most people either don’t know about [deer management services] or don’t want it,” he continued, “they like seeing the deer around.”

But with more deer around, that often means more damage to private gardens, as well as dangerous collisions with vehicles.

AFTER THE VENISON CHILI DEBUT at LCAC last year, executive director Linda Patterson said it really opened doors for people trying new things. That’s especially valuable when they can’t always predict which meat they’ll have donated from one of the area grocery stores.

“They’ve become adventurous,” she said, “it’s helped broaden their horizons.” Where some guests of the pantry would only ever pick up one type of meat, now they’re willing to try several kinds. That’s carried over to vegetables as well, Patterson said, aided by nutrition and cooking demonstration classes LCAC offers.

Patterson said they’ve actually seen a 10 percent decrease in food pantry usage over this time last year. Around Christmas they were serving about 250 families each week. Then it went down to 230 for a few weeks, now it’s around 190-210.

She attributes the change to fear caused by changes in the federal government, including President Donald Trump’s two travel bans targeting people from several majority-Muslim countries, as well as increased immigration enforcement activity by ICE.

Patterson said there is also much uncertainty about how changes from Trump’s proposed budget may trickle down to affecting organizations like LCAC. In particular, cuts to housing could put a much greater burden on community members who are making ends meet, but only just.

“These are people doing critical tasks in the community,” Patterson said, like school bus drivers, dental technicians, department store clerks and restaurant workers. “We need to have people doing this work, they need a liveable wage, to afford their housing and provide a better life for their children.”

Though the food pantry user numbers are somewhat low, the LCAC leader said they have a high need for dry pasta, pasta sauce, rice and breakfast cereal. These are high-need items they don’t receive from grocery stores.

Earlier than normal, Patterson said they’ve had to reach out to faith communities and local schools asking them to hold spring and summer food drives.