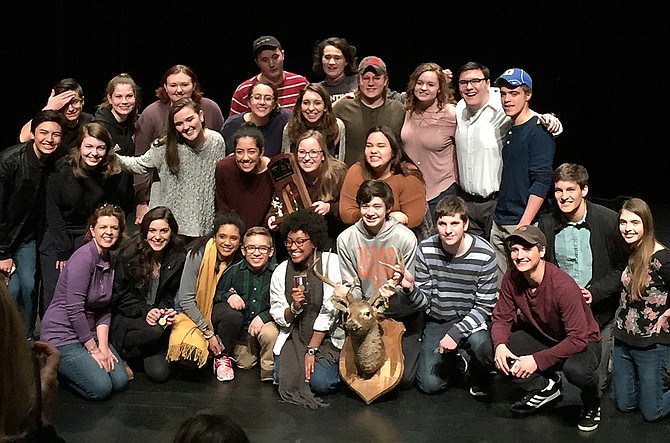 From left: Adam LeKang, Maria Benincasa and Jack David perform a scene from the play, “A Moment.”

For 17 years, Shannon Khatcheressian played second fiddle to Chantilly High Theater Director Ed Monk. But she was just as involved as he in the school’s theater program and productions.

Monk retired last summer; and now, in her first year at the helm, she’s proven every bit as talented and capable as him. Underscoring that point, on March 4, her students won the VHSL (Virginia High School League) One-Act Play Competition in Charlottesville to bring home the state championship.

“We were absolutely thrilled,” said Khatcheressian. “It had been such a great day of theater — and to end it on such a high note by winning first place really put a beautiful bow on the package.”

Actually, Chantilly’s victory was the culmination of other outstanding performances along the way. The local thespians took first place over seven other schools at District level and came in second to Fairfax High in Regionals, with both schools advancing to states. There, they vied against the top two regional winners from southern Virginia.

And when the acting was done and the stage lights went out, Chantilly was declared the winner — with an original play written by Khatcheressian. Called “A Moment,” it was a dramedy following three people after their deaths. One man died in his 30s; another, in his late 40s; and a woman died in her mid-20s. The play examined what each would have done differently, the day they died and throughout their lives, had they known they would die so young.

“For example, one man talks about how he would have kissed his wife before leaving home, even though he was rushing out the door,” said Khatcheressian. “Another person reflected on what he would have said to loved ones and wished he’d told them how grateful he was for everything they did for him.”

The show had a 21-person cast and a crew of seven, and the Chantilly students captured three out of the four acting awards presented. Adam LeKang was named Outstanding Actor, and both Adrianna Castillo and Maria Benincasa received Outstanding Actress honors. The other award for top actor went to a Fairfax High student.

“All four Outstanding Actor awards for the state went to FCPS students, which was really cool,” said Khatcheressian. “It speaks highly of the level of talent and commitment that we have within our theater programs here in Fairfax County.”

Regarding her expectations for Chantilly before the event, she said, “I was just thrilled at the opportunity to see these students go to the state competition because they’d worked so hard. They so beautifully brought to life a piece of work that I wrote that I was so proud of them, no matter what the result was going to be.”

Khatcheressian said the judges were “very kind in their remarks” about her play and recommended she publish it. “They commented on how it made the audience reflect on never taking anything for granted because you never know when your last day will come,” she said. “But yet, we mixed in so much comedy into such a dark subject that the judges gave us kudos on that, as well.”

Planning to take the judges’ advice, she said, “I’m excited to submit it as my first published play, along with the children’s play, ‘Imagine If,’ that I wrote a few years ago.”

All in all, said Khatcheressian, having her students perform a piece she wrote was “a wonderful learning process for all of us, in that they were flexible with the changes I made to the show throughout the rehearsal process to get the script finalized.” And, she added, “The judges also noted how polished the ensemble was — because it really was an ensemble piece. The students were such a cohesive unit that they intertwined beautifully and understood the other actors’ rhythms. They played off each other wonderfully to tell the story.”

Next on tap for Chantilly is the musical, “How to Succeed in Business without Really Trying.” It’ll take the stage May 3-6.