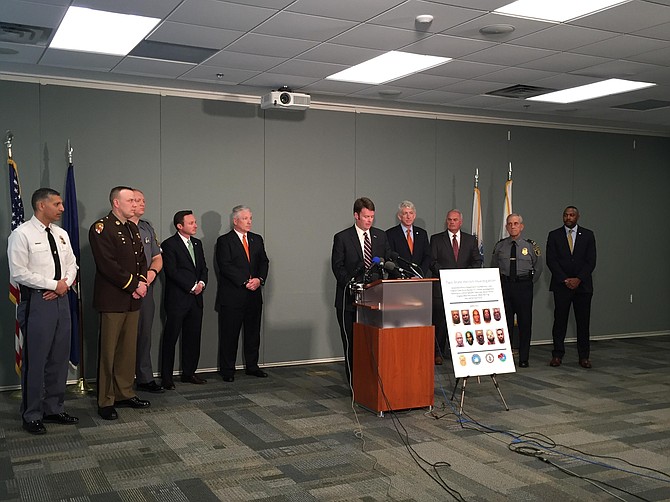 A year-long investigation by the Alexandria Police Department, along with other state and local law enforcement in Virginia and Maryland, has shut down a major heroin trafficking ring operating in the region. Eleven residents of Northern Virginia and Maryland were arrested on multiple counts related to illegal drug possession, distribution, and racketeering.

“Heroin dealers have been taken off the street,” said Virginia Attorney General Mark Herring. “[Heroin] is a drug that has no place in Virginia streets, schools, or home.”

On the morning of March 11, eight search warrants were executed at residences in the City of Alexandria, Prince William County, Fairfax County and Prince George’s County. Eleven suspects were arrested. Ten firearms were seized, along with several vehicles, more than 400 grams of heroin, 330 grams of cocaine, 19 grams of PCP, seven pounds of marijuana and $18,000 in U.S. currency.

Herring emphasized that while attacking the drug suppliers was a major success, combatting heroin addiction will also require committed resources to rehabilitation.

“Make no mistake: this is a real crisis,” said Herring. “We have to attack this problem with everything we have.”

Virginia State Police Criminal Investigative Bureau Director Gary Settle said the investigation started last spring after a series of overdose cases hit local hospitals. The investigation led to a single supplier in Maryland with a network throughout the region.

“This was not just a few street deals,” said Settle. “This was a complex network with thousands of dollars in heroin. There people were putting others’ lives at risk for their financial gain.”

Herring and others thanked the work of Lieutenant Michael Kochis, Commander of the Alexandria Police Department Vice Narcotics Section, and the undercover detectives who worked on the investigation.

Additional arrests and charges are pending. The cases will be prosecuted jointly by the City of Alexandria Commonwealth’s Attorney and Office of the Virginia Attorney General.

It was a heist unlike anything in Alexandria’s criminal history. On Dec. 16, three simultaneous emergencies struck across the city, and police said they were all the work of Lamont Sellers.

The first emergency hit at 2 p.m. when a bomb threat came in for Charles Barrett Elementary School. The school had to be evacuated. Immediately afterwards, the school central office was shut down when a call came in about a suspicious and heavily armed man in the area. Then came the final call, and the only real emergency of the three: a bank robbery at the Wells Fargo near the Minnie Howard Campus. Police currently believe the two other emergencies, both of which were false alarms, were made to distract from the bank robbery.

At 2:05 p.m., police say a man entered the bank, passed the teller a note, and implied that he had a weapon. He demanded money, which the teller surrendered, and the suspect fled with an undisclosed amount of cash. There were no injuries.

“It’s interesting, we don’t usually see this degree of planning into a bank robbery,” said Crystal Nosal, public information officer for the Alexandria Police Department. “But when people do this, we still track them down.”

While an elaborate plan, its effectiveness was questionable. Nosal said there was not a substantial delay in response caused by the other emergency calls, and the suspect was identified by surveillance video from the robbery. Sellers was charged with robbery, threats to bomb, and false summoning of law enforcement. He is being held without bond.