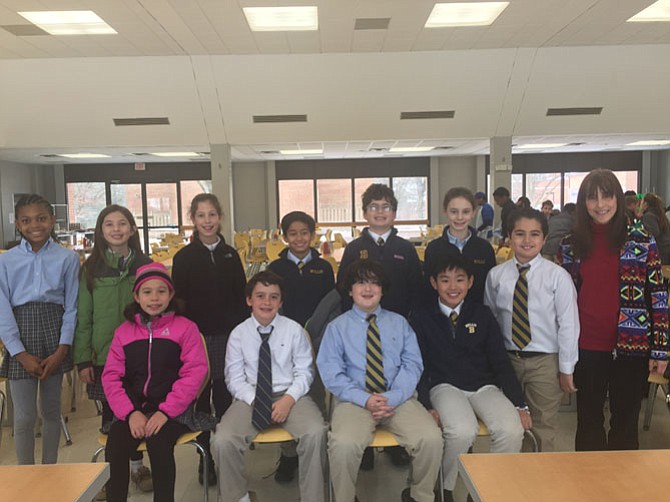 All it took was a student asking her teacher on the playground, “Why doesn’t the lower school have its own newspaper?” for The Little Bulldog to begin publication at the Bullis School.

The teacher agreed to be the sponsor if the student agreed to be a reporter and a club was born. Now in its sixth year, The Little Bulldog staff is made up of third, fourth and fifth graders who write, layout and publish the paper. Carolyn Cohen, a third grade teacher, is their sponsor: “The kids are getting excited about writing. I find it fascinating and I love being a part of the newspaper. Now that we are a club, students who really, really want to write are involved. We have three editors who take turns formatting the paper. The reporters cover school news as well as world news, human interest, sports, health, politics, science and editorial pieces.” The students choose from an assignment board of subjects and are given a primary source to start along with a deadline. They must edit their story before submitting it to an editor and then make any corrections or changed before the story goes to print. Each student has found their area of interest since joining the staff.

Why did the student reporters join The Little Bulldog and what do they like to write about?

Alisha Schruefer joined because “I have a talent for writing. I am working on a story called ‘Yellow World’ about my childhood. I like to write fiction the best.”

Anneke Lewis writes about things she finds interesting. Her most recent story was a science one about pipelines. She likes being an editor because “I get to read everyone’s articles and I like the formatting part. It helps me edit my own work.”

Samantha Pepper started on staff in third grade: “I thought it was a cool thing to do and I loved working on the paper. It gives me a good idea of what is happening outside in the world.”

Dilan Mendiratta likes to write about sports: “My favorite sport is football and I like the Seattle Seahawks. I cover football and basketball at Bullis.”

Matthew Halle likes writing about sports too: “I like hockey especially the Capitals. I decided to join the paper because I like writing about interesting and different things. I get excited when I see the printed copy.”

Drake Arnold joined the paper because “I wanted to know what is happening around the world. Sometimes even outside of the world. I like space and wrote a story about people going to Mars in 2030. I have written stories about outer space and things happening in foreign countries like reporting on the King of Thailand.”

Jack Sandi writes about what is new in the world. He recently did stories on clever cats and a 3D printed Adidas running shoe. He joined the paper because “I like writing and have good ideas for stories. If I stay on task and keep writing it will turn it into an amazing article.”

Alexis Ewing like to write about people. Her most recent stories were on a young inventor and Serena Williams, the champion tennis player. “I joined because it seemed like a good activity to be creative and express yourself in different ways. I feel excited when I get my newspaper copy and I hope people enjoy my stories.”

Nathan Chen designed a new front page for the paper. “I changed the colors, font, and shape and added a picture of the whole staff. I like covering natural disasters like the Louisiana tornado. I joined because I love writing and it is fun to have a whole newspaper for the lower school.”

Elizabeth Martin likes to be an editor because “formatting is fun and I get to read other people's articles and edit them. I joined for the opportunity to be an editor and I like to write about politics.”

Clay Narcisenfeld joined because “it is fun to write and for people to read the work we do. I like to write about anything interesting like ice melting in the Arctic. I get excited and nervous when the paper is published.”

In the future, sponsor Cohen hopes to have time to form a journalism class and would like the students to continue writing and develop confidence as writers.